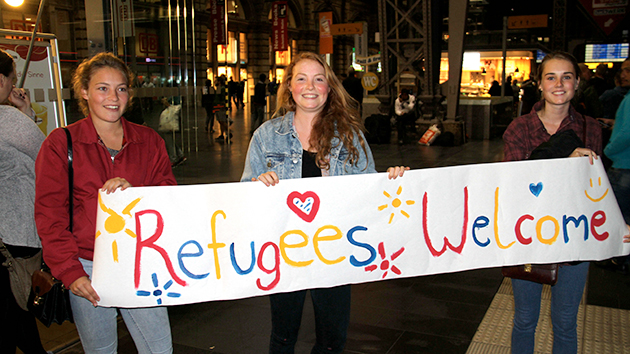 Over the weekend, tens of thousands of migrants continued to push across Europe, most of them fleeing wars in Syria, Iraq, and Afghanistan, as European leaders scrambled to agree on a way to equitably distribute the newcomers across the continent. For many of the migrants, Germany has emerged as the most desired location:

On the march along the highway most of these migrants have one destination in mind: Germany pic.twitter.com/rO6YmfqwFy

The numbers tell the story: 100 migrants are arriving in Germany every hour, according to the Telegraph. Yesterday, Germany’s vice chancellor said his country can accommodate 500,000 migrants annually for the next several years, and that $6.6 billion has been set aside for costs related to processing and accommodating them. Up to 800,000 are expected to arrive this year alone, far more than in any other European nation. Already, Germany has Europe’s largest population of migrants, just shy of 10 million in total, comprising about 11 percent of the country’s population.

Why Germany? There are a few key reasons, said Jacqueline Bhabha, an expert on migration at Harvard’s School of Public Health. The first is inertia: Because many migrants have already made it to Germany, other family members are likely to stick together and follow suit.

The second is economics: Germany has Europe’s biggest economy and lowest unemployment rate. For migrants seeking jobs, Germany is probably the safest bet. In fact, some of the country’s most prominent backers of refugee-friendly policies are industry groups, who have argued that migrants are needed to help fill a labor shortage. In a recent op-ed for Newsweek, the head of the Association of German Chambers of Industry and Commerce wrote that “many companies are desperate to find trainees and qualified staff, while some refugees have qualifications that are dearly needed. This potential needs to be exploited to a much larger extent.”

But perhaps most importantly, Germany has a legacy of opening its doors to refugees that dates back to World War II, when millions of refugees fled out of the country.

“Germany sees itself as having a historical commitment,” Bhabha said.

For the last several years, as hundreds of thousands of migrants have fled turmoil in the Middle East, German politicians and the media have captured and pushed that notion with the buzzword “Willkommenskultur” (“welcoming culture”), meant to signify a cultural commitment to welcoming immigrants.

“Germany has traditionally been more generous than France or the UK, and people know that,” Jacqueline Bhabha said.

“That has been perpetuated at a high level in Germany that you haven’t seen elsewhere,” said Susan Fratzke, an analyst at the Migration Policy Institute. “There’s been this persistent, positive narrative that Germany needs more people.”

For that reason, Fratzke said, Germany has a relative bounty of social services directed toward migrants: Subsidized housing, education, health care, and so on, and a streamlined process for filing immigration paperwork.

Bhabha added Germany has a relatively low bar when it comes to defining who qualifies as a refugee, under the UN Convention on the Status of Refugees, to which all the EU nations are signatories. That agreement stipulates that anyone who is fleeing persecution in their home country can seek refuge elsewhere, but it lets each host country decide independently which people qualify as refugees, as opposed to other categories of migrants.

“Germany has traditionally been more generous than France or the UK, and people know that,” Bhabha said. “So if you get to Germany, then Germany will tend to accept you.”

For Syrians specifically, German Chancellor Angela Merkel last month changed the country’s rules so that Syrians can stay in the country while applying for asylum, rather than being turned back to the EU country where they first arrived.

Germany’s pro-migrant attitude has been made manifest in train stations across the country over the last few days, as Germans turn up to offer tea, toys, and words of welcome to arriving migrants. But there could be darker consequences ahead, if the massive influx proves to be political ammunition for the country’s right-wing nationalists who want more stringent immigration policies.

“There could be a backlash,” Fratzke said. “It takes a while for the public to adjust to the new normal.”