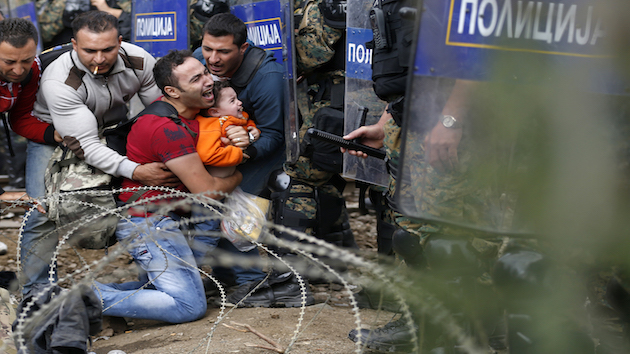 In July, the European Union was supposedly on the verge of disaster. Greece seemed ready to reject the demands of its creditors and dump the euro, paving the way for the potential end of Europe’s common currency—and perhaps the end of a united Europe.

Two months later, that threat is gone. The Greek government agreed to financial reforms in exchange for another bailout. Talk of a euro exit dissipated. But the conversation in Europe is now dominated by the astronomical rise in the number of migrants trying to enter the continent, both refugees from wars in Syria, Afghanistan, and other countries, as well as job seekers from elsewhere in Europe. The influx is again pitting EU states against each other. Germany and other countries are threatening to reinstate unilateral border controls in the face of EU inaction, undoing the landmark Schengen Agreement that has allowed years of free movement within the European Union.

Germany, with its relatively liberal immigration policy, has so far accepted the largest number of immigrants—and that number is expanding daily. The German government now expects 800,000 asylum applications this year, more than double its original estimate and more than all 28 EU countries combined received in 2014. Such numbers are small compared with the level of refugees taken in by Lebanon and Turkey, both of which border Syria and have borne the brunt of that war-ravaged nation’s depopulation. But the number of migrants heading for Europe is unprecedented in recent history.

German Chancellor Angela Merkel and other German officials have been calling for other EU states to share the burden. Merkel said in August that the ever-growing influx of refugees will challenge Europe “much more than the issue of Greece and the stability of the euro.” She repeated the point at her annual summer press conference on Monday: “If Europe fails on the question of refugees—if this close link with universal civil rights is broken—then it won’t be the Europe we wished for.”

But the signs for cooperation within the European Union aren’t good. EU countries met earlier this year to discuss a quota system, which would have assigned a certain number of refugees to most countries in the union. That effort failed. Leaders of Denmark and other countries insisted that the European Union cannot force them into taking anyone. And they’re largely right. “Almost any European country is perfectly capable of saying, ‘Screw you, we’re closing the borders,'” says Martin Schain, a professor at New York University who studies EU border politics. Underscoring this brewing conflict, Hungarian Prime Minister Viktor Orban on Thursday called the wave of migrants “a German problem.”

German leaders call the European Union’s slow pace “unacceptable,” and a range of top German politicians and cabinet ministers have spoken about reinstating border controls—which has already begun to happen in northern Italy, along with the building of a border fence in Hungary that refugees are rushing to get through before it’s completed. The Schengen Agreement, which eliminated almost all border checks within the European Union nearly 20 years ago, is a fundamental part of EU law and identity. It is “perhaps the most visible day-to-day sign of European integration” according to James Davis, the director of the Institute of Political Science at Switzerland’s University of St. Gallen. Enforcing borders and imposing checkpoints again would be a major symbolic blow for the European Union. It would also harm European trade and tourism, just as China’s economic slowdown is hitting the global economy.

“To close down the borders has long-term consequences in terms of trade, in terms of cultural exchanges, in terms of movement of people that are not calculated,” says the United Nation’s Crepeau.

Whether open borders—and the European project itself—are doomed is up for debate. Davis, writing for the Carnegie Europe Center, a foreign affairs think tank, said the Schengen Agreement will probably collapse next year, unless major changes are adopted. Yet Schain believes the accord’s demise is unlikely. “Really nobody wants Schengen to break down,” he says. “There’s just too much at stake.”

Either way, thousands of refugees arrive in Germany nearly every day, and every night brings news of another attack on planned housing for migrants. This problem is not going away.

Max J. Rosenthal is reporting from Berlin as part of the Arthur F. Burns Fellowship, a two-month reporting program in Germany run by the International Center for Journalists.