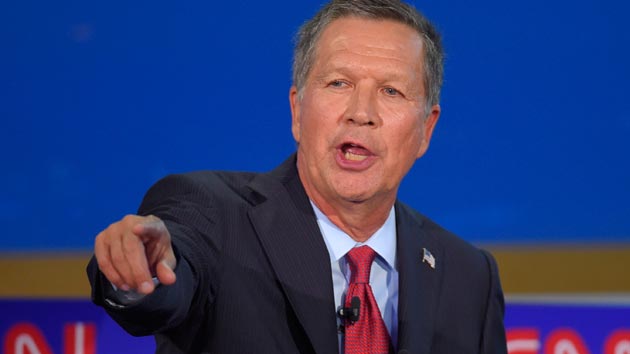 In 1996, then-Congressman John Kasich cosponsored a welfare reform bill that, for the first time ever, put a time limit on recipients’ access to food stamps. Healthy, childless adults would be able to receive Supplemental Nutrition Assistance Program (SNAP) benefits for no more than three months in any three-year period, unless they were employed or in a training program for at least 20 hours a week. When Congress balked at a rule that would cause an estimated 1 million people to lose food aid each month, Kasich added an exception that would allow states to seek time-limit waivers for areas with especially high unemployment.

Twenty years later, in his second term as Ohio’s governor, the GOP presidential hopeful is taking advantage of these waivers, as most governors have done. But Ohio civil rights groups and economic analysts say Kasich’s administration is using the waivers unequally: It applies for waivers in some regions of the state but refuses them in others, in a pattern that has disproportionately protected white communities and hurt minority populations.

“The Kasich administration could have addressed the racial inequity in 2016,” says Wendy Patton, a senior project director at Policy Matters Ohio, an economic policy research nonprofit, who has written extensively on the state’s recent food stamp waiver policy. “The Kasich administration chose not to. The state should broaden its request to encompass all places and regions where jobs are scarce and people are hungry.”

In 2014, the Ohio Department of Job and Family Services (ODJFS) had the option to waive time limits on food stamps for the entire state. Due to a struggling economy and high unemployment, Ohio had qualified for and accepted this statewide waiver from the US Department of Agriculture every year since 2007, including during most of Kasich’s first term as governor. But this time, Kasich rejected the waiver for the next two years in most of the state’s 88 counties. His administration did accept them for 16 counties in 2014 and for 17 counties in 2015. Most of these were rural counties with small and predominantly white populations. Urban counties and cities, most of which had high minority populations, did not get waivers.

The decision would result in a drastic downsizing of food aid in the state, but the administration moved with surprising speed given the enormity of the impact. “It was really fast,” says Kate McGarvey, deputy director of the Legal Aid Society of Columbus. In August 2013, she says, the legal services community had heard that Ohio qualified for a statewide waiver, and was setting up meetings with the ODJFS to discuss how the state might proceed. “Within a week or two, we were told, ‘It’s going to be a partial waiver, it’s already been submitted, it’s done,'” McGarvey says. “No advocates that I know of were given a chance to give feedback on the wisdom of the partial waiver.”

The policy went into effect in October 2013. By January—the three-month mark where those without waivers began losing their food stamps if they couldn’t meet the work requirement—it had become clear that the policy had spawned a stark racial disparity in food aid. Across the 16 counties the state had selected for waivers, about 94 percent of food stamp recipients were white. Overall in Ohio in December 2013—immediately before the new policy’s effects began to surface—food stamp recipients were 65 percent white.

By March 2014, six months into the new system, the six counties with the highest rate of terminating food stamps for able-bodied, childless adults were all counties populated mostly by minorities.

Within a few months of the system’s implementation, food pantries began to see an increase in their numbers of clients. “Nearly 140,000 people have been removed from the food stamp program since October 2013,” says Lisa Hamler-Fugitt, executive director of the Ohio Association of Food Banks, which has gathered data on thousands of adults in Ohio who have lost their food stamps. “We believe that the majority of them were removed for inability to meet the work requirement. And they are turning to our agencies to get food. More people are going to soup kitchens and homeless shelters, begging, panhandling, and dumpster diving. It’s not a good scene.”

Six months into the new system, the six counties with the highest rate of terminating food stamps for able-bodied, childless adults were all counties populated mostly by minorities.

A USDA study released earlier this month ranked Ohio among the worst states in the nation for food security. The state has the highest rate of food insecurity in the Midwest and the sixth highest rate nationally.

In the summer of 2014, several legal organizations, including Columbus Legal Aid, filed a civil complaint against Ohio with the USDA, formally alleging that the state’s rejection of waivers across the state disproportionately hurt minority populations. “Without any compelling reason, this decision, and its approval by the United States Department of Agriculture (USDA)…has unfairly made access to nutrition assistance more difficult for many minority Ohioans,” the organizations wrote in their letter.

The ODJFS’ waiver decision seemed to have little basis in math. Seventy-five percent of Ohio’s minorities live in just eight of the state’s 88 counties. None of those counties got a waiver, even though several of them have higher unemployment rates than counties that did get waivers, notes the civil complaint. “I’ve never seen the math that illustrates how they came up with these 16 to begin with,” says McGarvey, one of the authors of the civil complaint. “When we looked at the data, what we saw was that if they were just cutting it off at the 16 highest unemployment counties, purely using a mathematical formula, those would not have been the 16.”

“I’ve never seen the math that illustrates how they came up with these 16 to begin with.”

“It was not a mathematical selection,” says Patton. She explains that in 2016, the ODJFS said it would give waivers to counties whose two-year average unemployment rate was greater than 120 percent of the national unemployment rate during the same period. But the agency rounded county unemployment rates to two decimal points instead of one, as the USDA requires, effectively eliminating some counties from eligibility by mere hundredths of a point.

When asked to clarify the ODJFS method for selecting counties over the last three years, ODJFS spokesman Ben Johnson told Mother Jones, “The employment and training requirement does not deny anyone SNAP benefits. Rather, the requirement ensures that able-bodied adults without dependent children receive both SNAP benefits and education, job training, or volunteer or work experience…We have used the same methodology and calculated unemployment rates the same way each year.”

In 2016, Ohio will continue its narrow waiver policy. Though the state will no longer be eligible for a statewide waiver of food stamp time limits because its overall unemployment has improved beyond the eligibility threshold, up to 34 counties and 10 cities will remain eligible. The state excluded the cities from its request and will waive time limits for just 18 counties—most, again, in places that are rural and white.

It’s unclear whether Kasich’s administration is turning a blind eye to the racial disparity intentionally. But the policy continued even after its disparate impact was revealed over the last two years.

“I haven’t seen any evidence to show that it was intentional,” McGarvey of Legal Aid says. “But certainly at this point they know what the impact has been.”