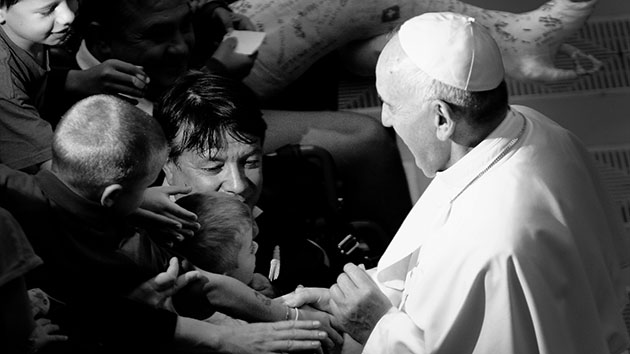 Pope Francis will arrive in the United States next week, with stops planned in Washington, New York City, and Philadelphia. In the nation’s capital, he will become the first pope to address a joint session of Congress. When House Speaker John Boehner extended the invitation, he said Francis’ teachings “have prompted careful reflection and vigorous dialogue among people of all ideologies and religious views.” He may not have appreciated just how radical the Pope’s teachings are.

In a sharp departure from his predecessors in the Vatican, Francis’ statements on such issues as climate change, divorce, homosexuality, and abortion have rankled conservatives around the world. The pushback on some of his more progressive interpretations of Catholic teachings has also angered many Catholics, triggering what the Washington Post described as a “conservative rebellion” within the church.

But from the very beginning of his papacy in 2013, he has been especially outspoken on the issue of income inequality. Serving the poor is one of the pope’s main priorities; when he chose his name in honor of St. Francis of Assisi, he said he wanted a church that was both poor and “for the poor.” In November 2013, he wrote his blueprint for where he wanted to lead the church, a document known as the Evangelii Gaudium or the apostolic exhortation, in which he focused on this issue. Here are six of the pope’s most critical comments from the document on one of the biggest problems facing the United States:

On income inequality: “While the earnings of a minority are growing exponentially, so too is the gap separating the majority from the prosperity enjoyed by those happy few. This imbalance is the result of ideologies which defend the absolute autonomy of the marketplace and financial speculation. Consequently, they reject the right of states, charged with vigilance for the common good, to exercise any form of control. A new tyranny is thus born, invisible and often virtual, which unilaterally and relentlessly imposes its own laws and rules.”

On “trickle-down” economics: “Some people continue to defend trickle-down theories which assume that economic growth, encouraged by a free market, will inevitably succeed in bringing about greater justice and inclusiveness in the world. This opinion, which has never been confirmed by the facts, expresses a crude and naive trust in the goodness of those wielding economic power and in the sacra­lized workings of the prevailing economic system.”

On the “idolatry of money” leading to a “new tyranny”: “The current financial crisis can make us overlook the fact that it originated in a profound human crisis: the denial of the primacy of the human person! We have created new idols. The worship of the ancient golden calf (cf. Ex 32:1-35) has returned in a new and ruthless guise in the idolatry of money and the dictatorship of an impersonal economy lacking a truly human purpose. The worldwide crisis affecting finance and the economy lays bare their imbalances and, above all, their lack of real concern for human beings; man is reduced to one of his needs alone: consumption.”

On the role of money: “Money has to serve, not to rule! The Pope loves everyone, rich and poor alike, but the Pope has the duty, in Christ’s name, to remind the rich to help the poor, to respect them, to promote them. The Pope appeals for disinterested solidarity and for a return to person-centred ethics in the world of finance and economics.”

On the ways income inequality leads to violence: “But until exclusion and inequality in society and between peoples are reversed, it will be impossible to eliminate violence…When a society—whether local, national or global—is willing to leave a part of itself on the fringes, no political programmes or resources spent on law enforcement or surveillance systems can indefinitely guarantee tranquility. This is not the case simply because inequality provokes a violent reaction from those excluded from the system, but because the socioeconomic system is unjust at its root.”

On the ways income inequality “kills”: “Just as the commandment ‘Thou shalt not kill’ sets a clear limit in order to safeguard the value of human life, today we also have to say “thou shalt not” to an economy of exclusion and inequality. Such an economy kills…Today everything comes under the laws of competition and the survival of the fittest, where the powerful feed upon the powerless. As a consequence, masses of people find themselves excluded and marginalized: without work, without possibilities, without any means of escape.”