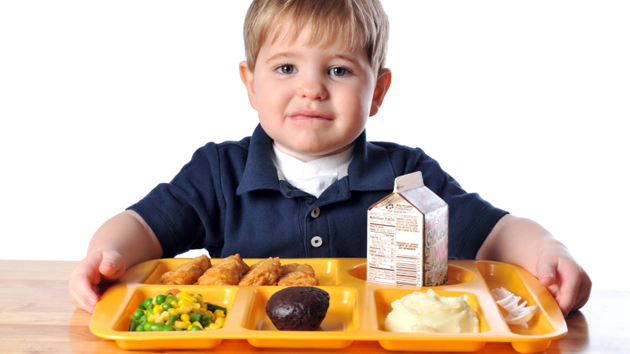 When kids dig into their cafeteria lunches, they may be getting an unwanted side dish. A new study from Stanford University’s Prevention Research Center has found that meals served at schools may contain unsafe amounts of bisphenol A (BPA), a chemical compound that has been linked to a laundry list of health problems, including hormone disruption, ADHD, and cancer.

“The only items not packaged in plastic were oranges, apples and bananas.”

BPA is widely used in plastic food packaging and can liners, but this is the first study on the compound to focus on school lunches, which often come prepackaged.

Researcher Jennifer Hartle observed that almost all the food that her team saw in schools came in plastic or cans. “Meat came frozen, pre-packaged, pre-cooked and pre-seasoned. Salads were pre-cut and pre-bagged,” she said in a statement. “Corn, peaches and green beans came in cans. The only items not packaged in plastic were oranges, apples and bananas.”

Teaming up with researchers from Johns Hopkins University, Hartle interviewed food service workers and observed cafeterias in schools around California’s San Francisco Bay Area. The group compared the school food to previous studies showing how much BPA ends up in various kinds of food. They found that in school lunches, BPA concentrations depended on the meal served, but that some lunches—especially the ones made with canned fruits and vegetables rather than fresh—contained more than half the amount considered toxic in animal studies.

The authors point out that there’s already a large body of research that BPA is dangerous even at low levels, and that while the European Food Safety Authority only allows for 4 micrograms of BPA per kilogram of body weight per day, the United States allows 50 micrograms.

BPA-free plastic packaging, say the authors, won’t solve the problem—scientists have linked BPA alternatives to a wide-range of health risks. “The bottom line is more fresh fruits and vegetables,” Hartle said in a statement. “There is a movement for more fresh veggies to be included in school meals, and I think this paper supports that.”