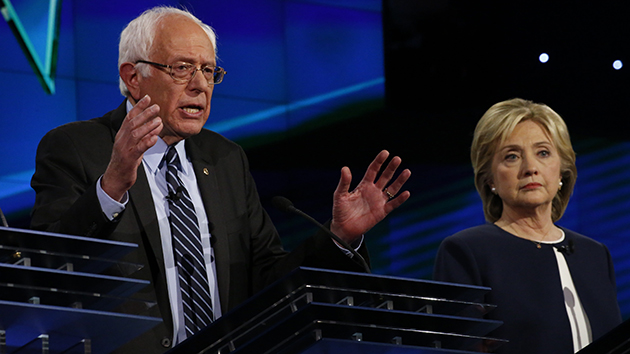 Sen. Bernie Sanders delivered one of the most enthusiastic applause lines of the first Democratic presidential debate when he came to Hillary Clinton’s defense over her use of a private email server during her time as secretary of state. After CNN’s Anderson Cooper asked Clinton about her upcoming testimony in front of Congress related to her emails, she offered the same answer she has repeatedly given in response.

“I’ve taken responsibility for it,” she said. “I did say it was a mistake.” She then employed her recent campaign strategy of linking the criticism of her email setup to the heavily politicized House Select Committee on Benghazi, which she described as “basically an arm of the Republican National Committee.”

But before everybody moved on, Sanders weighed in. “I think the secretary is right,” he said. “And that is, I think the American people are sick and tired of hearing about your damn emails.” Clinton smiled and thanked him, and the crowd roared its approval.

But some Americans are not sick and tired of her damn emails, and they want to hear more. The Republican members of the Benghazi committee and FBI investigators, who are currently looking into how classified material ended up on the server, are well-known examples. But there are also 32 separate lawsuits related to public-records requests for the disputed emails from Clinton and some top staffers during her time as secretary of state.

These requesters range from media outlets to Republican activists. Many of the suits are focused on specific foreign policy issues that she was likely to have addressed while secretary of state. Just last week, a federal judge denied a State Department request to assign a judge to coordinate all the cases. The State Department argued that because the cases are at various stages in front of 17 different judges, the situation was rife with “confusion, inefficiencies, and advantages given to some requesters at the expense of others.”

In denying the State Department’s request, the judge said there was already informal coordination to try to limit conflicting orders and search requirements, and also expressed doubt that the records would continue to be produced on schedule if a coordinating judge were to be assigned.

So, for now, the State Department and other government agencies will continue to manage each case individually. Below is a table of the 32 lawsuits. Several of them were brought by journalists or media organizations: The Associated Press has one, and Jason Leopold, a Vice News reporter who’s been instrumental in getting the emails released to the public, has two. Gawker Media’s suit is on the list, along with one brought by Shane Bauer, a Mother Jones reporter, who is suing the CIA, the FBI, and the State Department for records related to each agency’s handling of his imprisonment in Iran.

Another suit seeks the release of materials related to “Presidential Study Directive 11,” which some conservatives have argued revealed President Barack Obama’s plans to aid Islamist takeovers of governments across the Middle East. Another asks for records related to a Cambodian NGO that assisted girls and women who have escaped or been rescued from sex traffickers.

More than half of the cases in the State Department’s filing were brought by conservative groups. Judicial Watch, a conservative watchdog group, was responsible for 16 of the cases, seeking emails that contain references to the dealings of the Clinton Foundation and potential conflicts of interest, among other things. Veterans for a Strong America has one, and another is filed by Freedom Watch against the National Security Agency. Freedom Watch was founded by conservative activist Larry Klayman, who’s described by the Southern Poverty Law Center as “a pathologically litigious attorney and professional gadfly notorious for suing everyone from Iran’s Supreme Leader to his own mother.”

See the full list, along with case numbers, below: