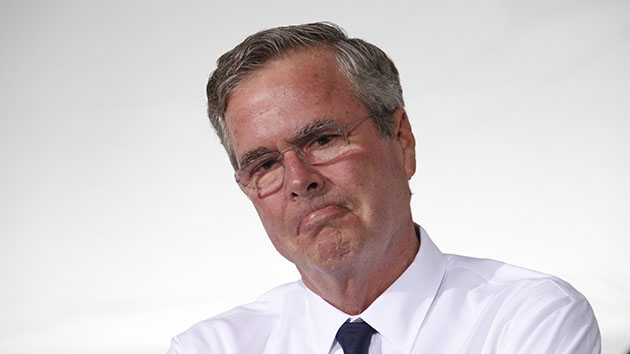 In February 2000, an ex-felon named Timothy White appeared before Jeb Bush to petition the Florida governor to restore his right to vote. Bush’s staff had recommended that the request be denied, but White hoped his compelling story would sway the governor.

“I committed a lot of things in my life that I regret, but seven years ago today, when I walked in that treatment center, I was a homeless drug addict without hope,” he told Bush and his cabinet at a hearing in the state Capitol building. “I made a dedication to God and my family and to a 12-step program, and since that day, thank God, I’m a new man.”

“What treatment program did you—” Bush asked White, who answered before the governor could complete his question. “Gateway Community Services,” White responded.

Bush announced he would restore White’s civil rights. State Treasurer Bill Nelson, who is now a Democratic US senator from Florida, congratulated Bush on his decision, noting that White’s case was one where “this body can really offer mercy.”

White was ecstatic. “You don’t know how much it means to me,” he gushed. “I didn’t think you’d do it.”

Two years later, Gateway Community Services sought $100,000 from the state to help inmates struggling with substance abuse and mental disorders. The Florida state legislature approved the funding as part of that year’s budget. Bush vetoed it. 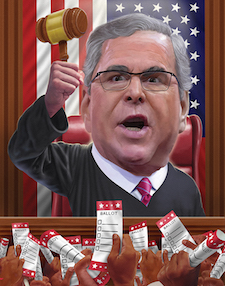 Florida is one of just three states that permanently disenfranchises everyone with a felon conviction. Today, that system excludes nearly 1.5 million Floridians from voting and disproportionately affects African Americans, with about 20 percent of the state’s black voting-age population barred from the ballot box. For many people, such as White, the only way to earn back the right to vote, to serve on a jury, and to run for office is to make the trip to Tallahassee and personally petition the governor and cabinet for clemency. Mother Jones recently analyzed more than 1,000 pages of transcripts to assess how Bush, now a Republican presidential candidate, oversaw the process during his eight years as governor.

Before restoring an ex-felon’s civil rights, Bush wanted proof that the former offender had put his past behind him and become a productive member of society. He asked the men and women who appeared before him if they had a job. If ex-offenders had committed crimes involving drugs or alcohol—a significant portion of them had—he wanted them to be sober. Completing a treatment program helped offer the proof Bush wanted that the people before him, like White, had truly turned a corner.

But Bush’s desire to see successful reintegration into society often ran up against his governing philosophy, which prioritized tax cuts and often rebuffed state legislators who sought additional funding for projects in their districts. Bush sought to rein in the budget by using his line-item veto power aggressively, cutting nearly $2 billion out of the state’s budgets from 1999 to 2007. Bush embraced the nickname “Veto Corleone” and has used it on the campaign trail as evidence of his conservative economic record. But many of the projects that succumbed to his veto pen were the very programs that helped ex-felons meet Bush’s own criteria for evaluating who deserved the right to vote.

Mother Jones searched a comprehensive list of all of Bush’s vetoes and found 32 vetoed items, totaling nearly $13 million, that would have funded programs for substance abuse and helped prisoners reintegrate into society. (The list below does not include many of the substance abuse programs targeted at adolescents. In his second year in office, Bush signed a law imposing draconian mandatory minimum sentences—up to 20 years in adult prison—for minors convicted of certain crimes, while also dedicating $5 million to drug and alcohol rehabilitation for minors.)

Despite these vetoes, Bush did take steps to assess prisoners’ reentry into society and lower recidivism rates. In February 2005, he commissioned the Governor’s Ex-Offender Task Force to study the issue. The task force issued a final report a month before Bush left office. It noted that more than half of the state’s prison inmates had substance abuse issues, yet state funding for treatment programs was nearly halved from 2000 to 2004. The Task Force also found that funding for education and vocational training for prisoners, another key ingredient to successful reentry into society, had fallen by a third in the same period. The report called for the state to expand its treatment of substance abuse, including for inmates suffering from addiction and a mental disorder.

Bush did enact some reforms aimed at rehabilitation, including the country’s first faith-based prison, which featured activities such as religious studies and choir and brought in community volunteers to work with prisoners. The Task Force’s 2006 report found that faith-based prisons showed promise. While it was too early to study changes in recidivism, disciplinary rates at these prisons were half of what they were at other facilities.

The Bush campaign did not respond to a request for comment.