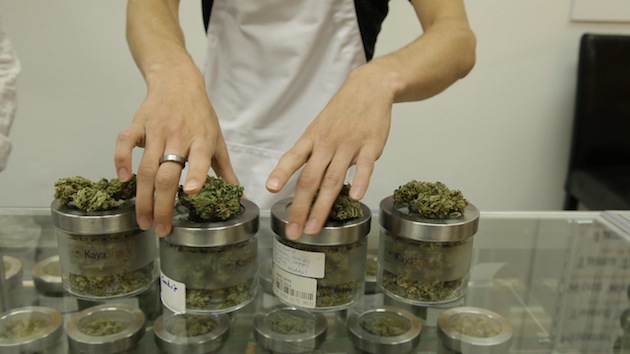 In what may prove a turning point in the fight over medical marijuana, a federal judge this week rejected the Department of Justice’s rationale for pursuing cases against dispensaries in states where they are legal.

The ruling centers on an amendment to the federal spending bill for this year. Section 538 of the spending bill, also known as the Rohrabacher-Farr Amendment, states that the DOJ cannot use federal funds “to prevent such States from implementing their own State laws that authorize the use, distribution, possession, or cultivation of medical marijuana.” That led many observers—Mother Jones included—to declare the end of the federal government’s crackdown on medical marijuana.

Not so fast. The DOJ has taken this to mean that it cannot impede “the ability of states to carry out their medical marijuana laws”—but that it can still pursue cases against individuals and organizations in those states as it sees fit, DOJ spokesman Patrick Rodenbush said in a statement.

The amendment’s authors, Reps. Dana Rohrabacher (R-Calif.) and Sam Farr (D-Calif.), have objected vehemently to this interpretation. In July, they called on the department to “investigate federal agents’ illegal use of taxpayers’ money to prosecute medical marijuana practitioners in states where the practice is legal.”

In a ruling issued Monday, Judge Charles Breyer of the US District Court for the Northern District of California came down firmly on the lawmakers’ side.

“It defies language and logic for the Government to argue that it does not ‘prevent’ California from ‘implementing’ its medical marijuana laws by shutting down these same heavily-regulated medical marijuana dispensaries; whether it shuts down one, some, or all, the difference is of degree, not of kind,” Breyer wrote.

The Marin Alliance for Medical Marijuana, the defendant in the case, was one of the oldest legal medical marijuana dispensaries in California until it shut its doors in 2011, after US attorneys opened forfeiture proceedings against it. Breyer wrote in his ruling that Californians’ access to medical marijuana had been “substantively impeded by the closing of dispensaries, and the closing of MAMM in particular.”

MAMM founder Lynette Shaw told the San Francisco Chronicle this week, “I’m very happy and I’m very relieved that I will get to return to my life’s work.”

Breyer’s ruling may serve as a precedent in other cases against medical marijuana dispensaries, such as the DOJ’s outstanding civil forfeiture case against Harborside Health Center in Oakland, California, the country’s largest pot dispensary.