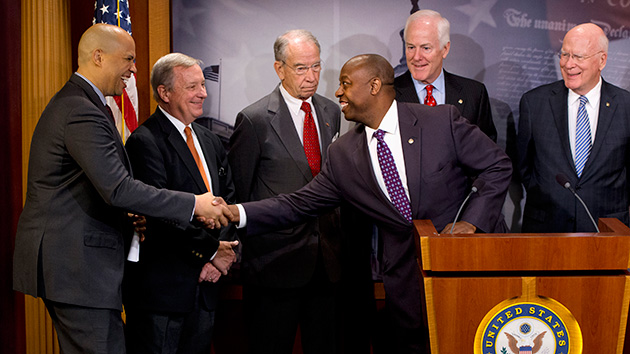 Today, nine Senate Republicans and Democrats proposed a bill that Senate Judiciary Committee Chairman Chuck Grassley (R-Iowa) hailed as “the biggest criminal justice reform in our generation.” This is undoubtedly true, at least at the federal level. The proposal, which was more than three years in the making and touches on everything from drug sentencing to solitary confinement for kids, is the most concrete step yet to confront what politicians on both sides of the aisle are now calling our “mass incarceration” problem.

In a press conference to announce the bill, Sen. Dick Durban (D-Ill.) pointed out that the “United States incarcerates more of its citizens than any other country on earth.” Yet the 141-page Sentencing Reform and Corrections Act is remarkably unambitious in addressing that particular problem.

To begin with, the bill only affects the federal justice system. For truly national criminal-justice or prison reform, each state would have to pass its own bill. Federal inmates represent just 13 percent of our national prison population. (If you count jail populations, federal prisoners are just 9 percent of all Americans behind bars.) Even if we let all inmates out of federal lockups tomorrow, we would still have more people behind bars than any other country in the world.

Even if we let out all federal inmates tomorrow, we would still have more people behind bars than any other country in the world.

But the Sentencing Reform and Corrections Act does tweak several policies that advocates and activists have long sought to change. Many had hoped the bill would eliminate some mandatory minimum sentence laws. (In 2010, 40 percent of federal inmates were subject to a mandatory minimum penalty at sentencing.) The act wouldn’t do that; instead, it would reduce 10-year mandatory minimums for nonviolent drug offenses to 5-year minimums for people with no prior convictions for serious felonies. The reduction would not apply to major drug dealers or anyone who sold drugs to a minor. Significantly, anyone who refused to give up information about the drug activities of others would still be subject to the 10-year minimum.

These sentencing reductions come with a trade-off. The bill would create new mandatory minimums for some crimes. Some interstate domestic violence charges would result in 10-year minimum sentences. Additionally, the bill imposes a five-year mandatory minimum sentence for anyone convicted of providing “controlled goods or services” to terrorists or state sponsors of terrorism such as Syria or Iran. (The list of such items includes not just military equipment, but vehicle parts like tires.)

The bill would also make some changes to the Clinton-era three strikes rule. Currently, people convicted of a third federal drug felony are automatically sentenced to life in prison. Under this bill, the first two strikes would have to be serious drug crimes or violent felonies, and the third strike would bring 25 years, not life. This would apply to people currently in prison for their third strike.

Other parts of the bill would be retroactive as well. In 2010, Congress passed the Fair Sentencing Act, which reduced the sentencing disparity that had treated the possession of a gram of crack cocaine the same as the possession of as 100 grams of powder cocaine. This disparity was widely seen as racist: a third of crack users were black, yet 88 percent of federal crack offenders are black. Under the new bill, the Fair Sentencing Act would become retroactive, causing thousands to be released from prison.

The bill would ban most solitary confinement for juveniles held in federal facilities.

A significant portion of the new bill is aimed at the federal juvenile justice system. (Again, it wouldn’t change any state-level policies.) It would ban solitary confinement for juveniles held in federal facilities unless it was used as an immediate response to stop them from hurting someone else, and even then it couldn’t last longer than three hours. The bill also proposes that minors who were convicted as adults and have served at least 20 years can apply for reductions in their sentences. The bill would also make it possible for certain people convicted of nonviolent offenses as kids to seal their files after being released. And all nonviolent offenses committed by kids under the age of 15 would automatically be expunged from their records when they turn 18.

The bill proposes reforms to the federal prison system, such as recidivism reduction programs, in which some prisoners convicted of nonviolent crimes can get out early if they go to a reentry center or enter home confinement “subject to 24-hour electronic monitoring.” Interestingly, a section calling for more recidivism reduction calls for “a survey to identify products…that are currently manufactured overseas and could be manufactured by prisoners.”

Overall, the bill focuses on politically safe issues—long sentences for nonviolent drug offenses are now widely unpopular. But it doesn’t address the main driver of mass incarceration: sentencing for violent crimes. It’s a common myth that the war on drugs drove the fivefold increase in America’s total prison population since 1980. Nonviolent drug offenses do account for a full half of federal inmates, but in state prisons the story is much different. There, drug offenders account for just 16 percent of the prison population.

Ultimately, the only way to bring our prison population anywhere near pre-Reagan-era levels—when we had about 300,000 people behind bars—would be to make major changes in sentencing for more serious crimes. Nationally, 47 percent of prisoners are incarcerated for violent crimes and 18 percent for property offenses. If we let out everyone incarcerated for a drug offense, our total prison population would drop from 1.6 million to 1.2 million. The statistic that Durbin cited about the United States locking up more people than any other country would still be true.