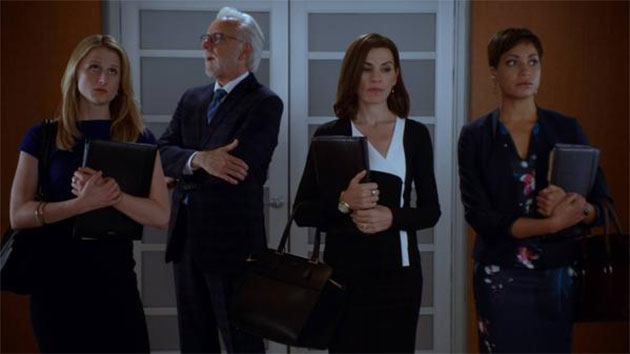 The episode opens and the good wife is in bond court and she meets a kid who has been arrested for vandalizing some stupid photo exhibit at the Chicago Museum of Art and this kid, see, this kid just doesn’t know how to help himself. “I did it,” he says over and over despite the good wife’s pleas that he ixnay the whole confession-ay. The bond judge grants the dumb kid bail and as he’s being led away he says to Alicia, “it’s me…in the photo [i defaced.] It’s me.”

Can we talk about this whole thing for a second? The entire idea that Peter would fire Eli for Margo Martindale is insane. Peter owes everything to Eli and up until last week’s episode has been acutely aware of that. I get they just needed to set up a fight for Eli to have but it really just makes Peter seem even worse than he already is.

And, look—OK, this is turning into a rant—but Peter, the bad husband, has never been portrayed as an actually evil or nefarious person. Deeply flawed, yes, but never villainous. The whole throwing Eli under the bus thing is really annoying me. But I digress.

Eli bumps into Margo Martindale as he’s leaving Peter’s office and she threatens to kill Eli if he comes near “[her] candidate again.” Eli asks her if she’s seen It Follows. Like me, she has not. Unlike me, she hasn’t even read the Wikipedia summary.

Back to the kid who hates the art. The photo is of him as a child when he was naked. His mom is a famous photographer. His mom is played by Amy Irving! I love Amy Irving. Amy Irving and my dad were in a movie once called The Competition where they played competing pianists who fall in love. The art vandal in this episode is basically my brother.

Alicia needs an investigator because Kalinda is gone so she interviews a few of them. One is this guy who is clearly really good. He’s played by a famous actor whose name I can’t remember, but he was in Watchmen and various other things. He is too famous not be the one she ends up with but also his character is too rich for Alicia’s blood. He costs $5 more than another investigator so Alicia goes with the cheaper one…for now.

Cary and Howard are fighting about something and I don’t know or care what.

Mamie Gummer is back guest starring as Amy Irving’s lawyer. The good wife feels for Amy Irving’s son because he’s clearly a screwed up twentysomething and it’s probably because of all these naked photos of him running around. She is going to try to get the Chicago Museum not to show the photos.

Eli calls the good wife and lets her know that Peter won’t let her hire him as her chief of staff. The good wife is like, “no way, José” and goes to visit her husband and is like “LET ME HIRE ELI OR I WILL DESTROY YOU BY TELLING THE PRESS HOW OUR MARRIAGE IS A SHAM” and Peter is like, “ok ok ok ok.”

Amy Irving and the son she photographed nude as a child meet and he is like, “mom, please don’t put these photos in the museum” and his mom is like, “I’m an artist, kiddo.” Amy Irving is really good at playing a hippy artist here.

Alicia’s case against Amy Irving has to do with whether her son ever gave consent to be photographed nude. Mamie Gummer says Amy Irving gave consent because she is the child’s mom.

Margo Martidale dispatches a spy to be Eli’s assistant and report back to her all his activities because she finally realizes that he isn’t giving up without a fight.

Amy Irving’s son takes the stand and explains how ever since the photographs of him naked where made public he has received emails from pedophiles. “After the book was published I’d come out of school and these…men…would be waiting for me.” Gross.

Cary and Howard are still fighting. I don’t want to bother trying to explain this storyline but one of Howard’s throw away lines is: “I can sum up the Cubs turnaround in one word: Jews.”

The investigator Alicia hired screws up a bunch because she is utterly incompetent and Alicia is like “damn i should have hired that famous actor who was far too famous to only appear in one scene of this TV show.”

Amy Irving takes the stand and is all, “look, back off, ok? I am an artist and lots of artists use their children as subjects and if I were a man you’d be throwing me a fucking parade” and then the bond attorney who is now Alicia’s second chair is like, “I’m not in the business of throwing parades for people who take photos of naked children.”

Back at Alicia’s house, Eli presents the good wife with a plan to make her “Saint Alicia” again. She needs to go the Democratic party chief who screwed her over last season. I don’t remember all the details of that but he was corrupt and forced Alicia to drop out of the State’s Attorney race even though she had totally won and not done anything wrong. He is a bad corrupt person. That is all we need to know.

The corrupt man asks Eli to let him and Alicia talk privately and is like “I want to put you on the election board. People like people on the election board! But here’s the thing, I need you to do me a corrupt favor. Vote No on the first vote. DON’T ASK ANY QUESTIONS ABOUT WHAT THE FIRST VOTE WILL BE BUT JUST VOTE NO, OK?” And the good wife says, “ok,” because the good wife is not a perfect human being.

Alicia fires her shitty investigator and calls the guy from Watchmen but he maybe is going to work for Cary. Cary can offer him a lot more money.

Anyway blah blah the case of the naked child continues and it isn’t going great for Alicia and Amy Irving’s kid but then P.I. Watchmen suggests she put a pedophile on the stand and the pedophile is like, “oh yeah I love looking at those photos of that kid naked! All the pedos love it!” It’s a darkly humorous scene.

It seems like ol’ good wife has Amy Irving over a barrel but then the kid is like “mom, i don’t want your money I just want the photos so the pedophiles will leave me alone” and the good wife is like, “the photos are still on the internet, kid. You can’t unring the bell. But this money can help you start a new bell.” Amy Irving looks at the kid and reaches her hand across the table. The kid reaches his hand and joins his in hers. This is the end of the scene.

Peter tells Margo Martindale that Eli did a good thing by getting Alicia on the elections board and that she should call him and give him an attaboy. She is disturbed by this instruction.

Back at the good wife’s home we find out that she won the case on behalf of Amy Irving’s son and got a nice chunk of change so apparently that handshake meant Amy Irving was agreeing to pay her kid. The male investigator shows up and is all “knock knock, I have a really good offer. Can you beat it?” We know what the offer is but Alicia does not. Diane offered him $250 an hour. Alicia says, “what’s the offer I have to beat?” And Jeffrey Dean Morgan (thank god, I finally remembered his name) lies to her and says, “$90 an hour.” Alicia offers him $95 which is still way less than the $250 he was really offered but he says yes because he likessssssssss her.