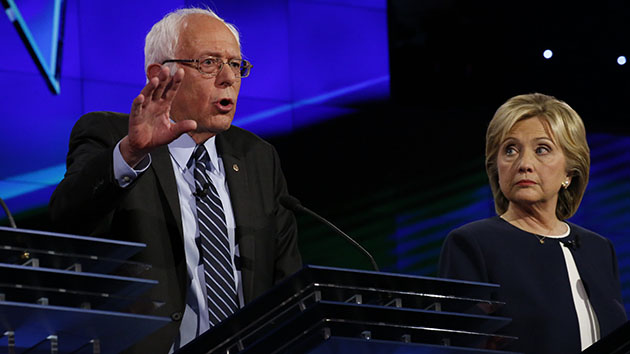 The contrasts between Hillary Clinton and Bernie Sanders are largely differences of degree. He’s a self-proclaimed socialist; she fashions herself a “progressive that likes to get things done.” He hopes to bust up the biggest banks and offer free tuition at public colleges and universities; she wants to tamp down on risky Wall Street behavior and require students to work part-time in order to attend college without building up debt.

But these discrepancies would likely disappear if either Democratic candidate wins the presidency and attempts to push these bills through a Republican Congress that considers all of the proposals too far left for its liking.

The real difference between Sanders and Clinton might come down less to the what of their policies than to the how of implementing them. When Sanders unveils a new policy as part of his presidential campaign, he tends to pair it with legislation he introduces in the Senate. Judging from his campaign, a President Sanders would spend much of his time trying to convince Congress to pass massive legislative overhauls.

Clinton, on the other hand, often pairs ideas for legislation with promises of executive action in her policy fact sheets. When she rolls out a new policy proposal, the most details are usually in descriptions of the unilateral actions she would take through the power of the executive branch.

Take the two campaigns’ recent approaches to reforming marijuana laws. Sanders introduced a bill in the Senate that would end the federal prohibition on the drug (which, like other far-reaching bills he’s introduced alongside campaign pledges, has not yet received even a committee vote). Clinton’s approach isn’t more modest just in substance, but also in approach. She’d change the classification of marijuana on the federal drug schedule, which would allow it to be used for medical purposes. That’s within the purview of the executive branch without congressional intervention. (Neither campaign responded to requests for comment on how each candidate views the role of legislation and executive action.)

The past two presidents have both slowly ramped up the frequency of presidential action without consulting Congress. Following 9/11, George W. Bush expanded the scope of surveillance and the executive’s international actions. “We’ve been able to restore the legitimate authority of the presidency,” Dick Cheney once bragged. President Obama, despite promising to “reverse” that expansion in his 2008 campaign, has only furthered the trend. Upon first gaining office, with friendly Democratic majorities in Congress, Obama pushed expansive laws like the stimulus and the Affordable Care Act. But once Republicans took the House in 2010, Obama’s ability to pass major changes through Congress was stymied, and he’s turned to executive action, such as using the Clean Air Act to lower carbon emissions from coal plants after Congress failed to pass a cap-and-trade bill.

With Democrats unlikely to retake the House anytime soon, if a Democrat wins the presidency in 2016, most progressive gains will probably have to come in areas where the president doesn’t have to seek congressional approval—through the courts and executive actions.

Sanders is hardly opposed to an expansive view of what a president can accomplish through executive order. Earlier this spring, before launching his presidential campaign, Sanders wrote a letter urging the Obama administration to close several corporate tax loopholes through executive fiat and and boost revenues by $100 billion. He’s cheered Obama’s use of executive orders to force federal contractors into more liberal employment practices.

But on the campaign trail, Sanders shows his instincts as a senator. While Clinton’s plan for financial reform pledged to appoint more aggressive regulators to crack down on Wall Street’s bad actors and focused on what she’d veto, Sanders’ issues page on Wall Street is a litany of changes that would have to clear Congress: a bill breaking up the biggest banks, a return to the Glass-Steagall law that separated commercial and investment banking, and a financial transaction tax.

When Clinton released her plan to tackle gun violence, she offered up a slew of ideas for the kind of legislation she’d like to see passed and said she’d push Congress to expand background checks. But in the likely event that a Republican Congress didn’t help her in passing that legislation, Clinton said, she’d focus on how she could use executive orders to close the gun show loophole. She made clear that she’d prefer to pursue the traditional legislative route, but was resigned to the realities of dealing with a Republican-controlled Congress.

Clinton’s proposals for executive action might be easier to enact, but they carry plenty of risk. Laws last until they’re overturned, which often involves relitigating the entire fight. Executive orders and instructions to federal agencies can be wiped out as soon as a successor enters the White House. And ambitious executive actions often stand on shaky ground while awaiting judicial approval. Take Obama’s executive order known as the Deferred Action for Parents of Americans and Lawful Permanent Residents, or DAPA, which offered millions of undocumented immigrants a reprieve from deportation. He signed the order last year, but it’s remained in judicial limbo ever since. Earlier this week, the Fifth Circuit Court of Appeals ruled the order unconstitutional, leaving the fate of the policy in the hands of the Supreme Court.