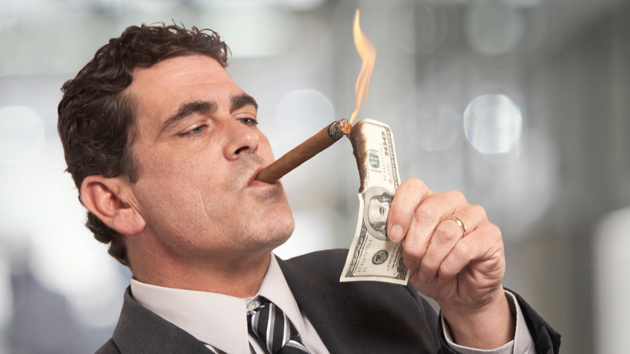 A member of the middle class? <a href="http://www.shutterstock.com/pic-127785641/stock-photo-rich-businessman-lighting-cigar-with-dollar-bill.html?src=_18xhUGBudZPUfdUjnCiUg-1-2">aastock</a>/Shutterstock

Hillary Clinton’s campaign has spent much of the past week trumpeting her pledge to protect the middle class from tax increases. Clinton has “proposed a bold, aggressive agenda,” campaign press secretary Brian Fallon said in a statement this week, “but when it comes to paying for it, she will make sure the wealthiest Americans finally start paying their fair share, not force the middle class to pay even more than they already do.”

The former senator and secretary of state hasn’t been shy about using that pledge to bludgeon her Democratic opponents, Sen. Bernie Sanders and former Gov. Martin O’Malley, as too eager to take money away from the middle class. “If you are truly concerned about raising incomes for middle-class families, the last thing you should do is cut their take-home pay right off the bat by raising their taxes,” Fallon said. “Yet Bernie Sanders has called for a roughly 9 percent tax hike on middle-class families just to cover his health care plan, and simple math dictates he’ll need to tax workers even more to pay for the rest of his at least $18-20 trillion agenda.” Twitter accounts affiliated with Clinton’s campaign have eschewed subtlety to attack Sanders and O’Malley on this point.

At the #DemDebate, only one candidate pledged to raise middle-class incomes and not their taxes: Hillary Clinton. pic.twitter.com/6LdKjWyx8N

There’s a problem with Clinton’s line of attack: She is promising to exempt a lot of indisputably rich people from paying more in taxes. Clinton pledged last week that, should she become president, she wouldn’t allow taxes to be raised on households earning less than $250,000 per year—by any measure a very high ceiling for the middle class.

The middle class is one of those nebulous terms with no clear-cut definition. But a glance at the distribution of income across the country makes it hard to argue that anyone earning close to $250,000 a year could be considered part of the “middle” of the income range.

The median household income for 2014, according to the US Census Bureau, was $53,657, about where it has been for the past three years (though still down quite a bit from the $57,357 mark in 2007, before the recession hit). To get into the top 20 percent, a family needs to make more than $112,000 per year. Entry into the top 5 percent requires more than $206,000 in annual income. A typical definition of the middle class wouldn’t include the top 5 percent of earners, who took in more than half the money earned nationwide in 2014. And yet Clinton’s bar is even higher.

The overwhelming majority of Americans like to think of themselves as belonging to the middle class, even when they have far more buying power than the average resident. With wealth growing increasingly concentrated at the very top tier of the superrich, it’s easy for someone making $150,000 to look up the chain and feel less than wealthy, even while liberated from many of the concerns of those closer to the actual middle bracket of annual income. 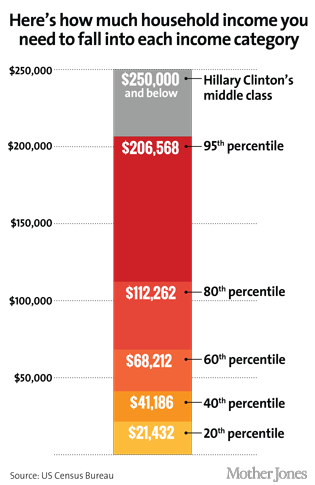 Clinton didn’t draw her number out of thin air: $250,000 is the same pledge she made in her 2008 campaign, and the level that President Barack Obama has also used to define the middle class. As the New York Times explained in 2011, that demarcation probably came from Bill Clinton’s decision to set the highest income tax bracket at $250,000. (Thanks to inflation, the highest tax bracket is now income more than $464,000 for married couples.) But by setting such a high marker, Clinton would make it much harder to find the funding to pass many of the ambitious progressive goals she has suggested on the campaign trail.

If Clinton (and Obama) had defined the middle class as making up to $150,000 in yearly income, that slice of the country would exclude all but the wealthiest 11.3 percent of households—perhaps a more reasonable metric.

Of course, Clinton’s own finances may influence her sense of income norms. From the time she left the State Department to her presidential campaign launch, Clinton went on the speaking circuit, raking in millions, with a typical fee of around $200,000 per speech. Since the Clintons left the White House in 2001, the pair have earned more than $230 million together, and financial disclosures from the current campaign show that the Clintons have a net worth between $11 million and $53 million.

Sanders has proposed a broad reimagining of the social safety net—most prominently single-payer health care—that would require raising substantial new revenue through taxes. But even less sweeping progressive legislation, such as Clinton’s proposals, would likely force the government to bump up taxes on a wider swath of the population than just those making more than $250,000 a year.

“This is the kind of argument that conservatives make,” the Huffington Post‘s Jonathan Cohn wrote of Clinton’s attacks on Sanders. “It might or might not help Clinton win in November. It’s hard to see how it can help progressives win in the long run.”

Take the Family Act, a bill introduced by Sen. Kirsten Gillibrand (D-N.Y.) to wide acclaim from progressive groups, which would institute paid family leave for workers. To offset the cost of that new benefit, Gillibrand’s bill would institute a small increase in payroll taxes, which would hit many of the same people for whom Clinton has pledged to not raise taxes. Clinton has endorsed paid family leave in concept but has yet to explain how she’d pay for it.

On Tuesday, Lis Smith, O’Malley’s deputy campaign manager, lit into Clinton over the recent attacks and called on her to explain how she’d pay for family leave. “Secretary Clinton is right: Governor O’Malley does support paid family leave, and he supports paying for it,” Smith said in a statement. “She is trying to have it both ways on this issue—making promises she can’t pay for, and playing the age-old Washington game of promising a chicken in every pot.”