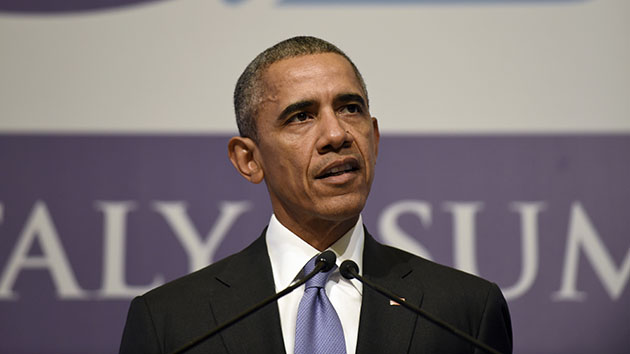 President Obama said on Monday morning that the terrorist attacks in Paris that killed more than 100 people on Friday should not affect the small intake of Syrian refugees into the United States. “Slamming the door in their faces would be a betrayal of our values,” he said during remarks at the G20 economic summit in Antalya, Turkey.

The comments were a direct rebuke to the governors of Alabama and Michigan, who announced over the weekend that their states would no longer resettle Syrian refugees because of security concerns. They were joined by the governors of Texas and Arkansas on Monday morning. While no Syrians have settled in Alabama since the start of the country’s uprising in 2011, Michigan is home to a large Arab and Middle Eastern community and at least 200 Syrians have found homes there, according to data compiled by the New York Times. That number was likely to rise after the Obama administration’s announcement in September that the US would take in at least 10,000 Syrian refugees over the next year, a nearly tenfold increase in the number of Syrians who have settled here since 2012.

Obama also took a clear swipe at former Florida Gov. Jeb Bush and Sen. Ted Cruz of Texas, both of whom said on Sunday that the US should focus on taking in Christian refugees rather than Muslims. Their comments echoed those of Eastern European leaders who pushed back against accepting refugees over the summer by saying their countries weren’t prepared to accept Muslims. “When I heard political leaders suggest that there would be a religious test for which a person who’s fleeing a warn-torn country is admitted…that’s shameful,” Obama said, growing visibly heated. “That’s not American. That’s not who we are. We don’t have religious tests to our compassion.”

Opponents of refugee resettlement have called for more stringent security checks on Syrians to make sure they have no connections to ISIS or other terrorist groups, but Syrians currently undergo a lengthy screening process that resettlement experts say is already sufficient to uncover terrorist ties. “Refugees are subject to the highest level of security checks of any category of traveler to the United States,” wrote Danna Van Brandt, a spokeswoman for the State Department’s Bureau of Population, Refugees, and Migration, in an email to Mother Jones. “Screening includes the involvement of the National Counterterrorism Center, the FBI’s Terrorist Screening Center, the Department of Homeland Security, and the Department of Defense.”

A Syrian passport bearing the name Ahmed Almuhamed was found near the remains of a suicide bomber at Paris’ Stade de France on Friday night. The passport was used by a refugee who entered Greece just six weeks ago, stoking fears that ISIS members may be using the refugee crisis as cover. But Syrian passports, both stolen and forged, are popular on the black market, and it’s still unknown if Almuhamed himself was the bomber. Obama cautioned on Monday about drawing quick links between terrorist groups and refugees. “It’s very important that…we do not close our hearts or these victims of such violence and somehow start equating the issue of refugees with the issue of terrorism,” he said.

Obama also fielded several questions about his strategy in Syria, which he defended as the only “sustainable” strategy available to the United States. While he said there will be an “intensification” of the current US actions, which include a long-running bombing campaign against ISIS and the recent deployment of special operations soldiers to northern Syria, he rejected any possibility that the US will deploy a large ground force to take on ISIS. “It is not just my view, but the view of my closest military and civilian advisors, that that would be a mistake,” he said. “We would see a repetition of what we’ve see before: If you do not have local populations that are committed to inclusive governance and who are pushing back against ideological extremists, that they resurface unless you’re prepared to have a permanent occupation of these countries.”