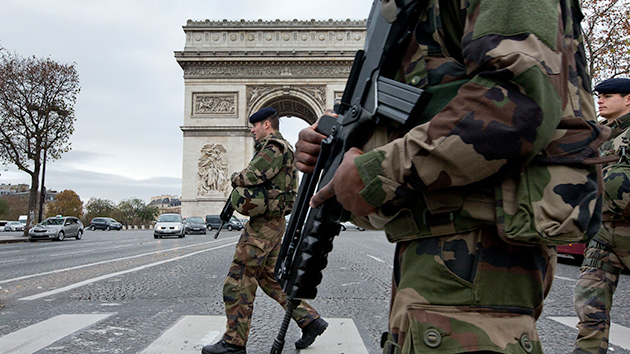 Security was heightened across Paris following Friday's deadly attacks. A major international climate summit is due to start there in two weeks.Peter Dejong/AP

On Saturday, just a day after terrorist attacks in Paris left at least 129 people dead and hundreds more injured, the French government vowed to forge ahead with a long-scheduled international summit on climate change.

The summit, which is scheduled to start in just two weeks, will take place at an airport in the northern suburbs of Paris, not far from the stadium that was the site of multiple bombings on Friday. There, world leaders plan to hash out final details of the most wide-reaching international agreement ever to combat climate change. White House officials confirmed to Politico that President Barack Obama still intends to attend the talks, as scheduled prior to the attacks. Dozens of other heads of state are expected to be there as well.

“[The summit] will go ahead with reinforced security measures,” French Foreign Minister Laurent Fabius said. “This is an absolutely necessary step in the battle against climate change and of course it will take place.”

Christiana Figueres, who chairs the UN agency overseeing the talks, released a similar statement on Twitter:

Of course #COP21 proceeds as planned. Even more so now. #COP21 = respecting our differences & same time acting together collaboratively.

Even prior to the attacks, 30,000 French police officers were scheduled to secure the event, according to Radio France International. More than 10,000 diplomats, non-governmental organization employees, and journalists are expected to attend the summit. Specific new security measures have not yet been made public, but Politico quoted an unnamed French official who said participants should expect “extremely tightened security” following the attacks.

Paul Bledsoe, a former climate advisor to President Bill Clinton, also told Politico that the attacks could actually improve the odds that the talks reach a successful outcome.

“The resolve of world leaders is going to be redoubled to gain an agreement and show that they can deliver for populations around the world. The likelihood for a successful agreement has only increased because of these attacks,” Bledsoe said.

On Thursday, just a day before the attacks, Secretary of State John Kerry appeared to butt heads with his French counterpart over what the exact legal status of the agreement will be. Other questions remain as well, such as how wealthy, heavily polluting countries such as the United States will help developing nations pay for climate change adaptation. But overall, the Paris talks are expected to yield a better outcome than the last major climate summit, in Copenhagen in 2009, which failed to produce any meaningful action to curb greenhouse gas emissions or prepare for the impacts of global warming.

Meanwhile, on Monday French officials said they would block a series of rallies and side events that were scheduled to take place outside the main negotiations. Environmental groups are scrambling to work out how to change their plans following the attack. Several groups involved in organizing protests and rallies that were intended to coicide with the Paris talks confirmed to Mother Jones that a hastily arranged meeting to hash out a plan will take place on Monday evening, Paris time. Will Davies, a spokesman for Avaaz, one of the main advocacy groups involved, said that despite the flurry of activity, plans for global marches in cities other than Paris were still going ahead as scheduled.

Stay tuned for more updates on this story.