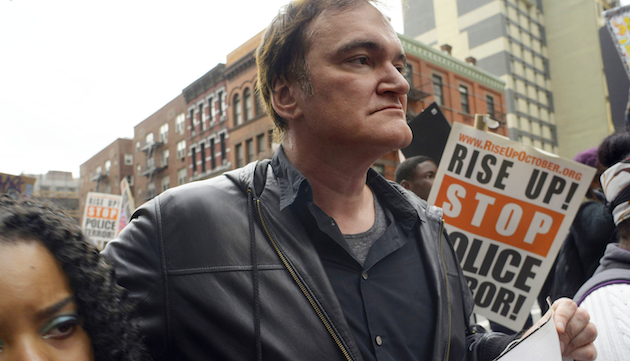 A boycott against filmmaker Quentin Tarantino launched in late October by the New York City Patrolmen’s Benevolent Association has been gaining steam with police unions across the country, with groups from Philadelphia to Los Angeles urging the public to reject the Hollywood director’s movies. “New Yorkers need to send a message to this purveyor of degeneracy that he has no business coming to our city to peddle his slanderous ‘Cop Fiction,'” PBA president Patrick Lynch said at the outset. The campaign is a response to remarks that Tarantino made while participating in a peaceful march against police brutality in New York City on October 24. “When I see murder I cannot stand by,” Tarantino told reporters. “I have to call the murdered the murdered and I have to call the murderers the murderers.”

As of November 2, the national chapter of the Fraternal Order of Police is onboard with the boycott, and the National Association of Police Organizations, which represents more than 1,000 unions, has also joined in. On Tuesday, Tarantino responded in the Los Angeles Times: “All cops are not murderers. I never said that. I never even implied that,” he said, adding, “What they’re doing is pretty obvious. Instead of dealing with the incidents of police brutality that those people were bringing up, instead of examining the problem of police brutality in this country, better they single me out.”

He’s just the latest. Ever since officer-involved killings became a major national issue, police union leaders have gone on the warpath, using odd boycotts and over-the-top incendiary statements to defend the ranks and push back on rising pressure for reforms. Tarantino joins a colorful list of people and places under fire from the unions. Here are six others: 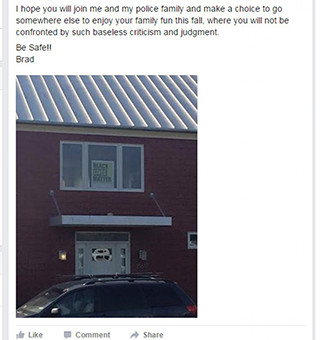 A pumpkin patch. In October, Brad Carruthers, the head of the Fraternal Order of Police chapter in Fairfax County, Virginia, called for the boycott of a local pumpkin patch after he spotted a Black Lives Matter sign in the business’s window. “This is a time in which law enforcement is the target for criticism for almost everything they do and officers are constantly questioned by the public and the media without the benefit of all the facts,” Carruthers wrote on his Facebook page, calling the display a “slap in the face” to the Fairfax County police. “The presence of this sign at Cox’s Farm helps perpetuate this kind of behavior and judgment. I know you have heard it all about a million times but the truth is that ‘All Lives Matter.'” Carruthers later took down the post, explaining that it misrepresented his intent. He told the Washington Post that he felt the Black Lives Matter movement had been “hijacked” by anti-police activists.

Arby’s. In September, police unions in Florida called for a nationwide boycott of the fast-food chain, after an officer in Pembroke Pines claimed that she was denied service while going through an Arby’s drive-thru. According to a police report on the incident, a manager told the officer that she was denied service because she was a cop. “In this case, after the clerk refused to serve the officer, the manager came up to the window laughing and said that the clerk had the right to refuse service to the officer,” John Rivera, the president of the Dade County Police Benevolent Association, said in response. “This is yet another example of the hostile treatment of our brave men and women simply because they wear a badge.” Another local union leader added, “I think the president needs to get to a podium and say ‘This needs to stop,’ that we need to put Ferguson behind us, Baltimore behind us, and we need to start treating officers with dignity and respect.” The Arby’s employee, Kenny Davenport, later explained to local reporters that he couldn’t serve the officer because he was busy with other customers and had asked for his manager’s help. The manager had made the remark as a joke. “We don’t hate cops,” Davenport said. “We don’t hate anybody. We’re just trying to get people out of the drive-thru.”

New York City. In July, the Sergeant’s Benevolent Association lambasted the city comptroller’s office after it announced a $5.9 million payout to settle the wrongful death case of Eric Garner, who was choked to death by a NYPD officer last December when police confronted him on the street for illegally selling cigarettes. Union head Ed Mullins called the settlement “obscene” and “shameful,” arguing that a jury would have awarded a lower figure. “In my view, the city has chosen to abandon its fiscal responsibility to all of its citizens and genuflect to the select few who curry favor with the city government,” Mullins told the New York Post. 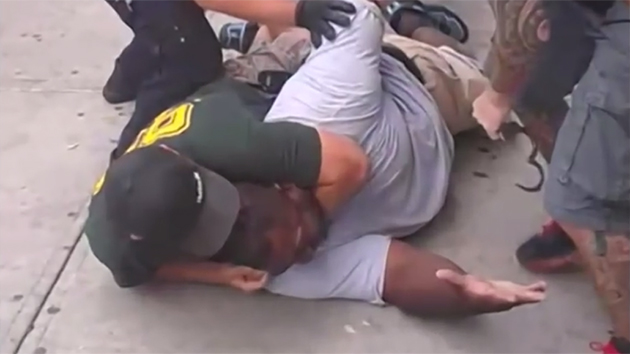 New York City Mayor Bill de Blasio. Last December, after a Staten Island grand jury declined to indict the NYPD officer who choked Garner to death, de Blasio extended his sympathy for Garner’s family and protesters, adding that he worried about the safety of his own mixed-race son. His comments were met with outrage from Patrick Lynch, the head of the Patrolmen’s Benevolent Association. “What police officers felt yesterday after that press conference is that they were thrown under the bus,” Lynch told reporters. The group then encouraged officers to sign a waiver it posted on its website, entitled “Don’t Insult My Sacrifice,” asking de Blasio and a city council member to not attend the funerals of fallen officers. Tensions further escalated after two NYPD officers were shot execution-style by a gunman in Brooklyn that month. Speaking from the hospital where the officers died, Lynch again railed against de Blasio: “There’s blood on many hands tonight,” he said. “Those that incited violence on the street under the guise of protest to try to tear down what New York City police officers did every day. It cannot be tolerated. That blood on the hands starts on the steps of City Hall in the office of the mayor.” During de Blasio’s visit to the same hospital, and the subsequent eulogies he gave at the officers’ funerals, hundreds of NYPD officers famously turned their backs to the mayor.

The Cleveland Browns. Ahead of a Sunday football game in December 2014, Cleveland Browns wide receiver Andrew Hawkins entered the field wearing a shirt with the words “Justice for Tamir Rice and John Crawford,” two young black men who were shot and killed by police in Ohio last year. During a pre-game warm-up a week earlier, Browns cornerback Johnson Bademosi had worn a shirt that read “I Can’t Breathe” in protest of the Eric Garner decision. Cleveland Police Patrolman Union president Jeff Follmer sent a letter to a local TV station demanding that the team apologize: “It’s pretty pathetic when athletes think they know the law. They should stick to what they know best on the field. The Cleveland Police protect and serve the Browns stadium, and the Browns organization owes us an apology.” 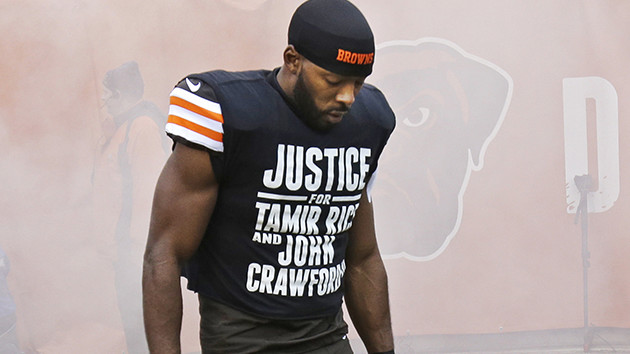 The St. Louis Rams. During team introductions at a game last November, five Rams players ran onto the field with their hands up, in a sign of support for Ferguson protesters and Michael Brown, the black 18-year-old who was shot and killed by a police officer in August 2014. The St. Louis Police Officers Association condemned the display, demanding that both the Rams and the NFL apologize, and calling for the players to be disciplined. “It is unthinkable that hometown athletes would so publicly perpetuate a narrative that has been disproven over and over again,” the association’s business manager Jeff Roorda said. “I know that there are those that will say that these players are simply exercising their First Amendment rights. Well I’ve got news for people who think that way, cops have first amendment rights too, and we plan to exercise ours. I’d remind the NFL and their players that it is not the violent thugs burning down buildings that buy their advertiser’s products. It’s cops and the good people of St. Louis and other NFL towns that do. Somebody needs to throw a flag on this play. If it’s not the NFL and the Rams, then it’ll be cops and their supporters.” 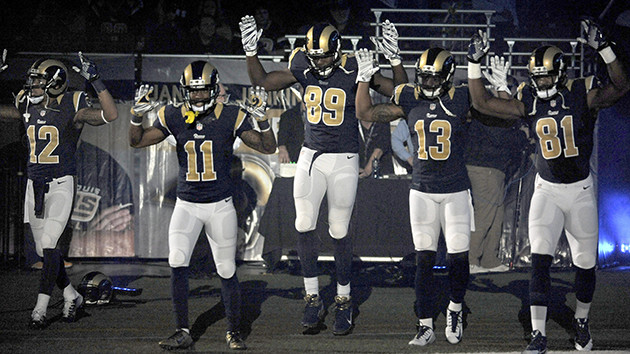 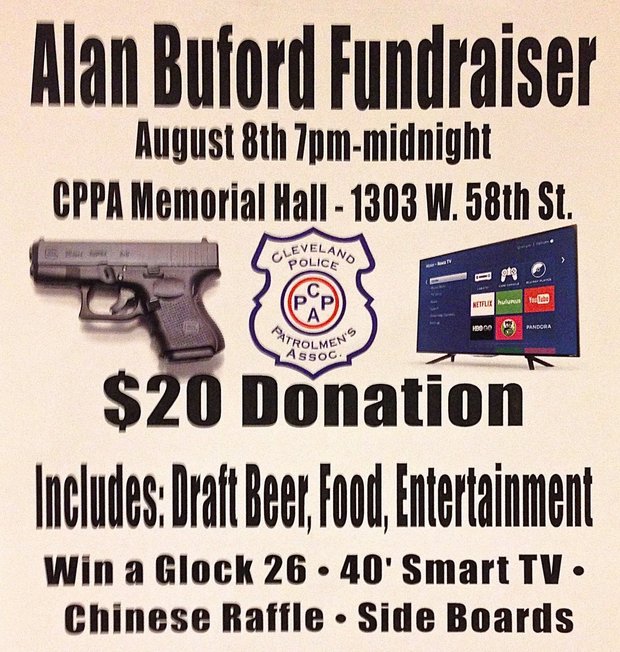 Police unions have also worked to raise money for officers involved in deadly shootings, but some of those campaigns have stirred controversy for their insensitive tone and management. After then-Ferguson police officer Darren Wilson was put on paid administrative leave for the shooting death of Michael Brown, Shield of Hope—a charity arm of the local Fraternal Order of Police Lodge 15—launched a GoFundMe campaign to accept donations from supporters. The page raised more than $234,000 before it was shut down due to a series of offensive comments posted by donors. In July, the Cleveland Police Patrolmen’s Association launched a similar campaign for an officer who was placed on restrictive duty after shooting an unarmed 18-year-old over an attempted burglary. A flyer for the fundraiser advertised several raffle prizes, including a television and a Glock 26 pistol.