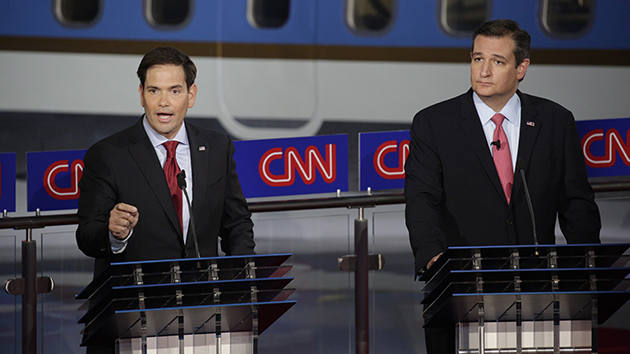 The simmering tension between Republican presidential rivals Marco Rubio and Ted Cruz has finally bubbled over.

On Tuesday morning, top advisers to each candidate pounded the other with the best ammunition at their disposal. The Rubio campaign slammed Cruz for a weak national security record, while a pro-Cruz group unveiled a vicious ad targeting Rubio on the issue that could become his greatest weakness in the Republican primary: immigration.

In the wake of the terrorist attacks in Paris on Friday, Rubio criticized Cruz for supporting the USA Freedom Act, a bill that limited the government’s bulk data collection efforts that began after the September 11, 2001, attacks. “At least two of my colleagues in the Senate aspiring to be president, Sen. Cruz in particular, have voted to weaken the U.S. intelligence program,” Rubio said. Alex Conant, a campaign spokesman, pushed the point on Twitter Tuesday, tying the vote to Democrats including Hillary Clinton, Nancy Pelosi, and President Obama.

So the Cruz campaign took to Twitter to defend its boss’s vote. Brian Phillips, who runs Cruz’s rapid response operation, pointed out that a number of Rubio supporters also voted for the USA Freedom Act.

11 of the 13 members of Congress supporting Rubio are apparently “weak” on national security. https://t.co/AssfENkrGr

Team Cruz quickly pivoted to the issue of immigration, its main line of attack on Rubio for his work on the Gang of Eight comprehensive immigration reform bill.

It was worse that fact-free. Schumer and Rubio deliberately mislead the American people about what was in #Gangof8 https://t.co/jiyvK3ZwYX

Although Rubio and Cruz are considered to be in different “lanes” in the primary—Rubio has the support of many establishment Republicans, while the party’s most conservative wing favors Cruz—they now lead polls among candidates with governing experience and are trying to win over voters seeking a more viable and experienced Republican nominee than Donald Trump or Ben Carson. Many observers believe that the race will ultimately come down to the two senators.

A new super-PAC backing Cruz has escalated the feud by hammering Rubio over the immigration issue. With the four super-PACs that support Cruz holding back from investing their $38 million fundraising haul in ads this fall (to the chagrin of the Cruz campaign), a new pro-Cruz super-PAC sprang up to show the others how to support the senator’s candidacy. The Courageous Conservatives PAC, whose treasurer is a close associate of Cruz’s campaign manager, Jeff Roe, released its third radio ad Tuesday. The ad pounds Rubio for his work on immigration reform in the strongest terms possible, accusing the Floridian of scheming with President Obama to give “amnesty” to undocumented immigrants and thwart Cruz’s efforts to secure the border.

“When Marco Rubio teamed up with John McCain, Chuck Schumer, Lindsey Graham, and Bob Menendez to push his Gang of Eight Amnesty scheme, he said he wanted to secure the border,” the narrator says. “But then Rubio voted against every border security amendment Ted Cruz and Jeff Sessions proposed. Every one.”

The narrator twists the knife at the end. “Marco Rubio betrayed our trust, failed us, and he’s done nothing since coming to Washington but push for amnesty.”

The ad will run for a week on radio in Iowa with a $15,000 buy, according to Rick Shaftan, a spokesman for the group. Shaftan says the super-PAC is ready to go with another $15,000 airtime purchase for a new ad after Thanksgiving. A spokesman for Rubio did not immediately respond to a request for comment.