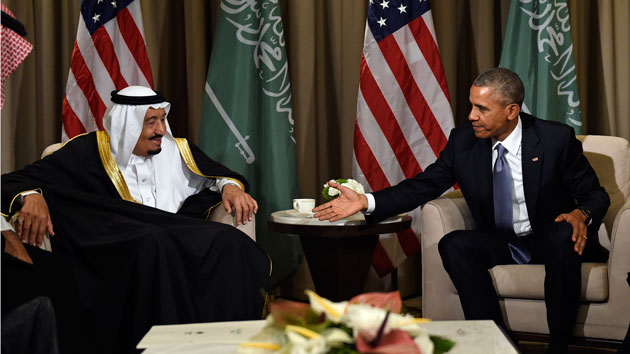 As part of its ongoing effort to promote “stability within the region,” the United States inked another giant arms deal with the Kingdom of Saudi Arabia on Monday. This one was for more than 10,000 advanced air-to-surface munitions like laser-guided bombs, “bunker buster” bombs, and MK84 general purpose bombs—which the Saudis have been raining down on Yemen since March. The deal, reached a week after members of the Gulf Cooperation Council raised concerns over its dwindling arms stockpiles and a few days after the end of the Dubai Airshow, is worth $1.29 billion.

That’s a small fraction of the more than $100 billion in arms sales that Washington and Riyadh have conducted in the past five years. And it comes just over a month after a Senate panel voted to delay weapons sales to Saudi Arabia after growing concerns over its reportedly indiscriminate bombing campaign in Yemen. The conflict between the US-backed, Saudi-led coalition against antigovernment rebels has caused more than 2,300 civilian deaths, according to the United Nations High Commissioner for Human Rights.

The latest deal, which comes just days after the ISIS terrorist attack in Paris, highlights the Saudis’ balancing act: On one hand, the ruling House of Saud is part of the coalition conducting air strikes against ISIS in Syria and Iraq, but it has also been accused of harboring funders who have given aid to ISIS as recently as the summer of 2014. And the kingdom’s history of exporting its Wahhabist strain of Sunni Islam has had worldwide implications. Writing in Foreign Policy, Daniel Benjamin, a former State Department coordinator for counterterrorism, has called Wahhabism “a devastating invasive species in Islam’s enormous ecosystem—it’s the zebra mussel, the Asian Tiger mosquito, and the emerald ash borer wrapped into one.” He continues: “The consequences have been fateful: A solid line of causation from the slaughter in Islamic State-controlled Iraq and the tragedy of 9/11 traces back directly to Saudi evangelization and the many radical mosques and extremist NGOs it spawned.”

The Saudis problematic relationship with extremism isn’t news. In US embassy cables leaked by Wikileaks, then-Secretary of State Hillary Clinton wrote in 2009, “Donors in Saudi Arabia constitute the most significant source of funding to Sunni terrorist groups worldwide.” She said that the United States needed to keep encouraging the Saudi government to do more to stop “the flow of funds from Saudi Arabia-based sources to terrorists and extremists worldwide.” The cables also list Qatar, Kuwait, and the United Arab Emirates as major sources of money for militants. These three nations are part of the Saudi Arabia-led coalition in  Yemen, and each has bought weapons from the United States, including guided missiles and Apache helicopters (to Qatar), Sniper Advanced Targeting Pods for their F/A-18s (to Kuwait), and guided bombs—a lot of them (to the UAE).

In the aftermath of the Paris attacks, Charlie Pierce of Esquire called for the United States to change its stance on its “Middle Eastern ‘allies’—the states and bankers and political elites—who persist in funding mass murder.” He argues that this means cutting off not just the money trail, but also arms. “It goes without saying, but we’ll say it anyway—not another bullet will be sold to you, let alone advanced warplanes, until this act gets cleaned up to our satisfaction. If that endangers your political position back home, that’s your problem, not ours. You are no longer trusted allies.”

The Saudis have been staunch US allies since World War II. Should the renewed push to defeat ISIS force a reassessment of that relationship?