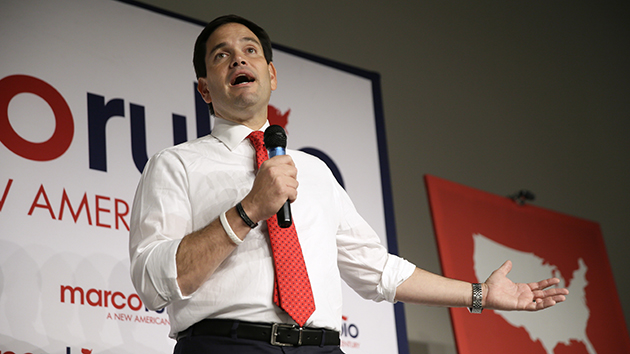 More than $5 million has been spent on television ads backing Marco Rubio’s presidential run—but none of it has come from the Florida senator’s campaign, or even the super-PAC formed to help elect him. Instead, all the spending has come from a dark money group that does not disclose its donors.

On Thursday, two campaign finance watchdog groups asked the Department of Justice to investigate whether the Conservative Solutions Project’s work on Rubio’s behalf is legal. In a letter to the tax division of DOJ, the Campaign Legal Center and Democracy 21 allege that the group exists solely to support Rubio’s candidacy, in violation of its 501(c)(4) nonprofit tax status. That tax status allows the group to raise unlimited sums—it has raised over $18 million thus far—while keeping its donors secret.

The group has denied that its efforts are about electing Rubio, telling the New York Times last month that its mission is to help “enact conservative solutions to the problems [American families] face.”

But in their letter, the two watchdog groups allege that the Conservative Solutions Project’s activities amounts to an illegal “private benefit” for Rubio under US tax law, for the purpose of “defeating the donor disclosure requirements of federal tax law.” Though the Conservative Solutions Project isn’t the only nonprofit group to push the legal boundaries of political involvement, the letter calls it “an especially clear-cut and egregious example of flaunting of the tax code.”

The pro-Rubio group is avoiding IRS scrutiny as long as possible. Rather than seeking advanced approval of its 501(c)(4) status, the group is holding off on approval of its status until it files its next tax return—likely deferring an inquiry until after the Republican primary is over. The Conservative Solutions Project told the Times that the decision not to file an application, which is legal, was made in response to IRS bias against conservative groups.

In a statement, the Campaign Legal Center’s executive director said failure to investigate the pro-Rubio group would encourage other groups to copy their tactics. “If these apparent violations are left unchallenged, they will quickly be emulated by candidates for Congress and soon by candidates for state and local office as well,” says J. Gerald Hebert, robbing the public “of any information about the special interests seeking to buy influence with public officials.”