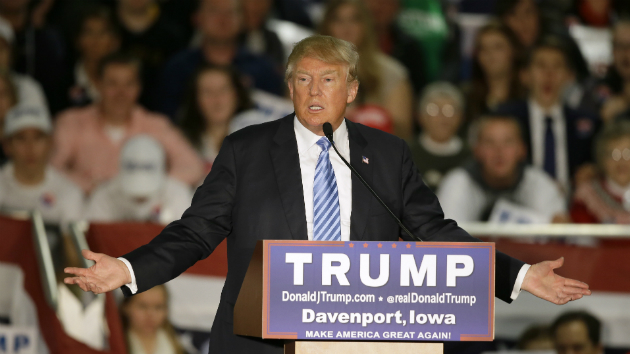 Here’s a mystery: What happened to Donald Trump’s big luxury hotel project in the Muslim-majority nation of Azerbaijan?

This summer, Mother Jones reported on the Republican presidential front-runner’s lucrative deal with a controversial Azeri billionaire to slap the Trump name on a 33-story glass, sail-shaped tower in the oil-rich nation’s capital, Baku. But this project, once touted in many of the Trump Organization’s press releases, has disappeared from Trump’s corporate website. The site lists all the hotels in the prestigious Trump Hotel Collection, including his properties in New York City, Chicago, Las Vegas, Miami, Turnberry (Scotland), Rio de Janeiro, and Bali. Each hotel, including those that have not yet opened, has its own web page. And there once was a web page for the Trump hotel in Baku, which was scheduled to open this December. But that page has vanished. And with no explanation.

What’s become of this much-trumped project? The Trump Organization did not respond to a request for comment. The publicist who recently repped the Baku hotel says she’s no longer on the project and that questions about its fate can only be answered by Trump’s company. When Mother Jones called the Trump hotel reservation line and asked about the Baku hotel, the sales agent said the project has been delayed and that there now is no date for its opening.

The Baku hotel was a big deal for the tycoon turned politician. Trump, who recently called to ban Muslims from traveling to the United States, announced with much fanfare in November 2014 that the Baku hotel would be the latest addition to his string of hotels. “Trump International Hotel & Tower Baku represents the unwavering standard of excellence of The Trump Organization and our involvement in only the best global development projects,” the real estate mogul boasted. “When we open in 2015, visitors and residents will experience a luxurious property unlike anything else in Baku—it will be among the finest in the world.” The development of the hotel, which was first slated to open in June 2015, was personally overseen by Trump’s daughter Ivanka.

In July, a representative for Trump Hotel and Tower in Baku told Mother Jones that the hotel would open by the end of the year. The building appeared to be complete, and job postings suggested that staff were being hired for the property. But sometime this fall the Baku hotel disappeared from the Trump Hotel Collection.

According to Trump’s personal financial disclosure form, his company last year received at least $2.5 million to manage the property and lend his name to the project. The hotel itself is owned by Anar Mammadov, a billionaire whose father is the transportation minister in the authoritarian Azerbaijani government.

Mammadov heads a company called Garant and is a member of a prominent but controversial Azeri clan. As Mother Jones reported in July:

Last year, in an article titled “The Corleones of the Caspian,” Foreign Policy reported that the “profit margins” of Mammadov’s Garant “appear inextricably linked to a number of sweetheart contracts signed with his father’s Transport Ministry.” One of Mammadov’s other companies has received over $1 billion in highway construction contracts, and the firm owns many of Baku’s buses and taxis. Until 2013, Mammadov owned a majority stake in the bank that processed all of the taxi cab fares and the company that provided insurance to all the cabs.…A leaked diplomatic cable on Azerbaijan’s “most powerful families,” drafted in 2010 by the charge d’affairs at the US embassy in Baku, noted, “With so much of the nation’s oil wealth being poured into road construction, the Mammadovs also control a significant source of rent-seeking.”

Mammadov is also the founder of the Azerbaijan American Alliance, an advocacy group that this year has spent more than $1.3 million lobbying Washington. Mammadov’s interest in US politics is seen as part of a larger effort by the country’s leadership to soften the regime’s kleptocratic image. The regime has been harshly criticized by human rights groups for its crackdown on civil society, including its near eradication of a free press.

James Fabiani, the lobbyist who represents Mammadov’s group in Washington, did not respond to a request for comment.

So has Baku gone bye-bye for the Muslim-bashing mogul? Whatever the fate of the hotel project, the GOP candidate’s Azeri business associate can’t be pleased with Trump’s anti-Muslim rhetoric. It’s not clear if Mammadov is Muslim, but more than 96 percent of Azerbaijan’s population is. A hotel with the bombastic billionaire’s name on it may no longer be a good sell in the region.