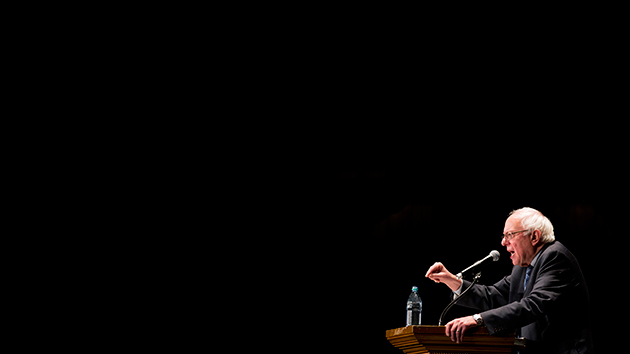 Bernie Sanders will unveil a sweeping new plan to fight climate change on Monday, calling for a carbon tax and an ambitious 40 percent cut in carbon emissions by 2030 to speed the transition to a greener economy.

The Democratic presidential candidate will use the crunch week of the climate change meeting in Paris to try to upstage rivals Hillary Clinton and Martin O’Malley, releasing a 16-page plan aimed at showcasing his green credentials.

The plan goes beyond Barack Obama’s climate pledges, which aim to match the European Union in ambition by calling for a 40 percent cut in carbon emissions by 2030 on 1990 levels, according to a copy of the plan seen by the Guardian. The 1990 starting point is a more demanding target than the current US baseline of 2005.

The climate meeting in Paris has attracted an unusual level of attention compared with earlier meetings, as Democrats and Republicans gear up for the first votes in the presidential primaries just over a month away.

A group of 10 Democratic senators flew to Paris to reassure the international community they would defend Obama’s climate plan. In Washington, meanwhile, Republicans in Congress have tried to block a global climate deal by trying to repeal Obama’s plan to cut carbon emissions from power plants.

Sanders’ plan – which will be released as talks aimed at reaching a global agreement to fight climate change kick into a higher gear – will feature the Vermont senator’s “take-no-prisoners” approach to the fossil fuel industry and climate deniers in Congress.

He will call for banning fossil fuel lobbyists from the White House, and ending subsidies to fossil fuel companies.

“Bernie will tax polluters causing the climate crisis, and return billions of dollars to working families to ensure the fossil fuel companies don’t subject us to unfair rate hikes. Bernie knows that climate change will not affect everyone equally,” the plan will say. “The carbon tax will also protect those most impacted by the transformation of our energy system and protect the most vulnerable communities in the country suffering the ravages of climate change.”

Sanders will also promise to keep the pressure on industry for spreading misinformation about climate change, saying he will bring climate deniers to justice.

“It is an embarrassment that Republican politicians, with few exceptions, refuse to even recognize the reality of climate change, let alone are prepared to do anything about it. The reality is that the fossil fuel industry is to blame for much of the climate change skepticism in America,” the plan will say.

And Sanders will not back away from his assertions about climate change as a security threat—despite ridicule from Republican presidential contenders.

“The reality is that the fossil fuel industry is to blame for much of the climate change skepticism in America.”

“Climate change is the single greatest threat facing our planet,” the plan will say.

Sanders’s call for a ban on new offshore oil drilling and fossil fuel projects on public lands won praise from groups such as Greenpeace and 350.org which have campaigned to keep coal, oil and gas in the ground to prevent dangerous climate change.

“He has broken free of the corporate and 1 percent money that has held back climate policy for far too long,” Annie Leonard, director of Greenpeace US, said in an emailed statement.

The plan appeared to be an attempt to regain ground lost to Clinton, as she took more ambitious positions on climate change.

Sanders was stung in November when the League of Conservation Voters delivered an early endorsement of Clinton – even though he scored far higher than the secretary of state in the campaign group’s green ranking score card.

O’Malley was the first off the blocks, unveiling his climate agenda in June in an opinion piece in USA Today, and continues to claim the strongest position by calling for a complete phase-out of fossil fuels by 2050.

Clinton meanwhile has slowly edged towards a stronger position on climate change as the campaign progressed, belatedly coming out against the controversial Keystone XL pipeline and hunting for oil in Arctic waters. She moved to outflank Obama on his renewable energy plan by calling for the US to get 33 percent of its electricity from clean energy by 2027.

Climate change occupies a far higher profile in the 2016 Democratic presidential primaries than earlier contests—in part because of Obama’s focus on the environment in his second term in the White House.

Democratic operatives see climate change as a potential wedge issue—a chance to paint Republicans as anti-science and out-of-touch for rejecting the science behind climate change.