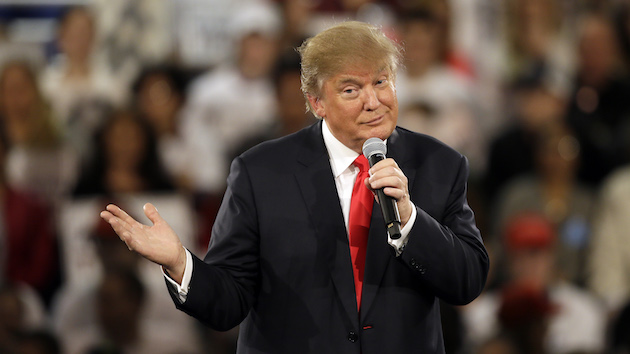 What’s happening with this country? When I talk to friends, relatives, and colleague outside of Washington, I am asked this question more frequently these days. And the premise of the query often boils down to one subject: Donald Trump. How can an arrogant braggart who so explicitly relies upon hateful rhetoric targeting Muslims and immigrants—and who has called for banning Muslims from entering the United States—be faring so well? Surely, this is a sign that the country is becoming unhinged and that dark and ugly days are upon us.

Perhaps. But not necessarily so. Trump is an outsized media and cultural phenomenon, and the supersaturated press coverage he receives (justifiably, after all he’s been the GOP front-runner for months) could prompt one to regard him and his extreme pronouncements with even more significance than they deserve.

So to all of you fretting that a fellow who calls for the imposition of official bigotry is a leading presidential contender, let’s take a deep breath and look at some numbers. They show that Trump at this point is drawing support from a limited slice of the US public.

As of November, according to Gallup, only 28 percent of Americans identified as Republicans. Thirty percent labeled themselves Democrats, and 39 percent said they were independents. (In the past two years, the number of GOPers has ranged between 20 and 33 percent.) Since early August, Trump has won between 21 and 31 percent support among Republicans in the RealClearPolitics average of polls, placing him consistently in the lead (except for a brief period when Ben Carson edged ahead). The math is simple: 30 percent (in the polls) of 28 percent of Americans (who are Rs) is 8.4 percent. That means, at best, approximately 1 out of 12 American adults are supporting a candidate who proposes registering, tracking, and banning the entry of Muslims. Is that a lot or a little? That depends on your own perspective and view of America. This is sort of a hall-filled/half-empty question.

To get a sense of the size of the national crazy cohort, we can look at a recent CNN poll that found that 13 percent of Americans believe that President Barack Obama was not born in the United States (and 12 percent had no opinion) and that 29 percent consider Obama a Muslim. (Forty-three percent of Republicans, according to this survey, believe Obama worships Muhammad.) This indicates that 20 to 30 percent of the nation falls into the unhinged and ignorant category. And Trump supporters number far fewer than those who believe Obama is a secret, foreign-born Muslim. That is, Trump, a prominent birther, hasn’t rounded up all the nuts and misinformed voters. Good news?

Trump also leads the GOP and Democratic packs when it comes to being seen in a negative light. Polls routinely show that nearly 6 out of 10 Americans have an unfavorable image of the tycoon turned candidate. No other major presidential candidate in either party ticks off voters as much as Trump. (Hillary Clinton’s unfavorable rating tends to be about 50 percent.) Trump has done well with a quarter to a third of Republicans, but he has indeed alienated voters outside the GOP—which is why the Republican establishment is having conniptions about a possible Trump nomination. And his proposed ban on Muslims traveling to the United States is supported by 25 percent of American adults; 57 percent oppose it. (Republicans, though, split evenly on the idea, with about 40 percent giving it a thumbs-up and nearly an equal amount saying nay.)

All of this is a reminder that Trump is something of a niche candidate. (Clinton has to date attracted much more support within her own party’s race, though that election is less competitive than the Republican contest.) But because the wide-open GOP presidential primary attracts so much attention, Trump’s status as a political symbol is inflated. And the unforeseen rise of a loudmouth, ever-tweeting celebrity businessman who will say almost anything has been entertaining and great for cable news ratings. True, as many pundits have noted, Trump is one of several outsiders who have aroused Republican voters so far. And if you total the support for these candidates—Trump, Carson, Ted Cruz, and Carly Fiorina—about half of the GOP electorate has been willing to let an outside-the-system contender (assuming Cruz, a sitting senator, is really not an insider) take control of the federal government. That’s worth noting. Still, Trump has not been able to corral much more than half of this anti-Washington populist anger on the right. And one thing is for certain: No GOP voter lacks information about Trump and his positions.

Trump is huge, but so far only within the small (and angry) world of GOP voters. He’s winning in the polls and, thus, he warrants the spoils: headlines, tweets, and notice. And there is no reason to scoff at the possibility that he may bag the nomination. But there’s no cause yet to formulate wide-ranging conclusions about the nation based on his interim success, and there’s no reason for unbigoted Americans to start to panic. Trump is a virus contained, for the moment, within the GOP bloodstream.

Then again, infections do spread.