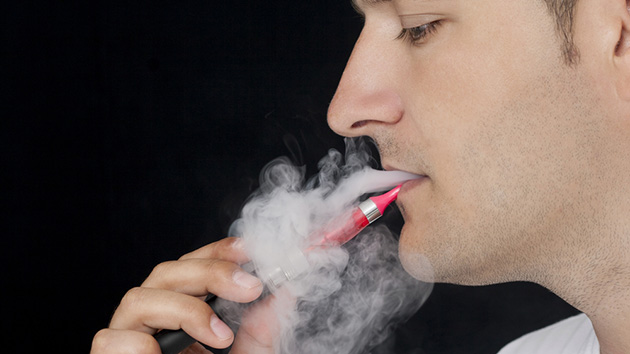 “An exotic fusion of pineapple and coconut with champagne infused blueberries.”

No, these are not excerpts from the dessert menu at a fancy hotel. They’re some of the latest offerings from the makers of vape pens and e-cigarettes—which are the same thing, more or less. As e-cigs gain traction (sales are expected to soar seventeenfold over the next 15 years), manufacturers are having a heyday concocting flavors that can be inhaled—an estimated 7,000 to date. Public health experts warn of the addictive nicotine in e-cigs and vaping fluids, and their potential to serve as a “gateway” to tobacco, especially for teens. But a new Harvard study instead took a hard look at those tantalizing flavors—and found that a majority, at least of the samples tested, contained chemicals linked to a dangerous lung disease.

Researchers tested 51 e-cig flavorings, including “Cupcake” and “Alien Blood,” and found chemicals linked to lung disease in 47 of them.

Researchers at Harvard’s T.H. Chan School of Public Health analyzed various e-cig and vape pen liquids for the presence of three related chemicals—diacetyl, 2,3-pentanedione, and acetoin—that are also used in artificial butter flavorings. By the turn of the 21st century, the Food and Drug Administration (FDA) had deemed diacetyl safe to eat, but little was known about what happened when a person inhales it. Then, in the early 2000s, workers at several plants that manufacture microwave popcorn came down with a nasty lung disease after prolonged exposure to the fake-butter fumes. The Occupational Safety and Health Administration (OSHA) investigated cases of this so-called popcorn lung and later released guidelines for dealing with diacetyl in the workplace, along with a list of foods that contain the chemical. “Current evidence points to diacetyl as one agent that can cause flavorings-related lung disease,” notes the CDC’s National Institute of Occupational Safety and Health. NIOSH says it is uncertain whether the other two compounds pose health risks, but it points out their chemical similarities to diacetyl.

Now the popcorn-lung chemicals are turning up in vape pens. The Harvard researchers tested 51 e-cigarette flavorings they deemed appealing to youths—think “Cupcake” and “Alien Blood”—and found diacetyl in 37 of them. At least one of the three suspect chemicals was present in 47 of the 51 samples. The researchers could not determine conclusively that using an e-cig flavored with these chemicals is harmful. But they pointed out that “the heating, vaporization, and subsequent inhalation” creates “an exposure pathway” similar to that of the microwave popcorn workers. Two of the flavors tested—”menthol” and “tobacco”—do not appear on the OSHA’s list of flavors likely to contain diacetyl.

Since they landed on the market in 2004, e-cigarettes and vape pens have been dogged by controversy. Fans claim they are far less toxic than regular cigarettes and might even help tobacco smokers quit. Public health officials counter that it’s too early to know very much about e-cigs’ health effects, especially on young people. (Their use among teens tripled from 2013 to 2014.) At least 43 states have placed age restrictions on the sale or possession of the products.

The FDA does not currently regulate e-cigarettes—it has stalled for years in proceeding with proposed rules that would allow it to regulate the devices as tobacco products. But given the new findings, the agency may want to take a closer look at the sweet flavors that make the nicotine go down.