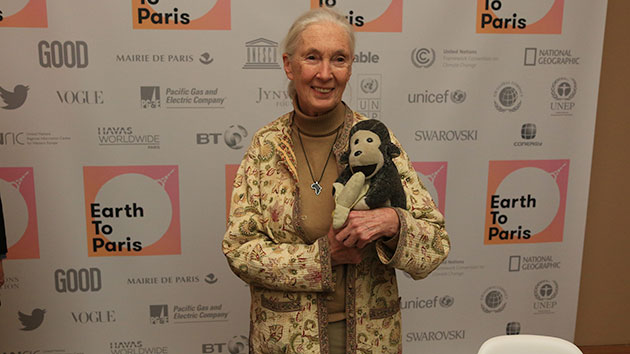 Jane Goodall spoke with reporters at a briefing in Paris on Monday. She was joined by "Mr. H," a stuffed chimp that she has traveled with for 30 years. Tim McDonnell/Climate Desk

At the major climate summit in Paris on Monday, renowned conservationist Jane Goodall called for Republicans in Congress to back down from opposing an international agreement on climate change.

“Success [at the Paris climate summit] would be a binding agreement to limit carbon,” she said in a briefing with reporters. But “a binding agreement isn’t much use unless it leads to actions and implementation. So there has to be a commitment to go back to your nation and follow through.”

Republicans in Congress need to “just sit down and forget about politics,” Jane Goodall said.

Asked whether that will happen in the United States, Goodall said, “It depends on who the next president is, doesn’t it?” All the leading Republican presidential candidates—most recently (and colorfully) Chris Christie—have said they would walk back President Barack Obama’s climate agenda. Most of them reject mainstream climate science, as well. The Democratic candidates have all taken the opposite position, wanting to push action on climate change beyond what Obama has been able to achieve.

This week, diplomats from nearly every nation on Earth are huddled in Paris to finalize a sweeping global agreement to limit greenhouse gas emissions and adapt to the impacts of climate change. Prior to the summit, Obama offered a commitment from the United States to reduce the nation’s greenhouse gas emissions by one-third by 2025. That commitment is backed by regulations based on existing US law—the Clean Air Act—but the commitment itself is unlikely to be legally binding internationally. Last week in Paris, Obama said other parts of the agreement should be binding, including a requirement that countries periodically revisit and possibly strengthen their carbon reduction targets.

But at the same time—back in Washington, DC—Republicans in Congress have taken steps to sabotage the Paris negotiations, passing legislation to block key parts of Obama’s climate agenda. (Those resolutions will almost certainly remain symbolic, as they face a guaranteed veto from the president.)

Obama’s statements notwithstanding, the US delegation in Paris could present obstacles to achieving a strong agreement as the talks move into their second and final week. One of the biggest issues on the table is international finance (i.e. how wealthy, high-polluting countries such the United States should help pay for climate change adaptation and clean energy in vulnerable developing countries). As Ben Adler reported last week for Climate Desk partner Grist:

Presumably the Obama administration would like to offer more climate finance, but it cannot without congressional authorization. Asking Republicans for foreign aid to solve a problem they claim doesn’t even exist would be like asking them to pay for gay weddings. Instead, the Obama administration has to fight with Congress just to make sure the GOP doesn’t strip what little climate finance the US has pledged, around $500 million per year until 2020, from the budget.

To Goodall, who spent more than 50 years studying chimps in Tanzania, these lawmakers are letting short-term politics obscure the bigger picture. They need to “just sit down and forget about politics,” she said. “Think about your children and revisit your belief.”