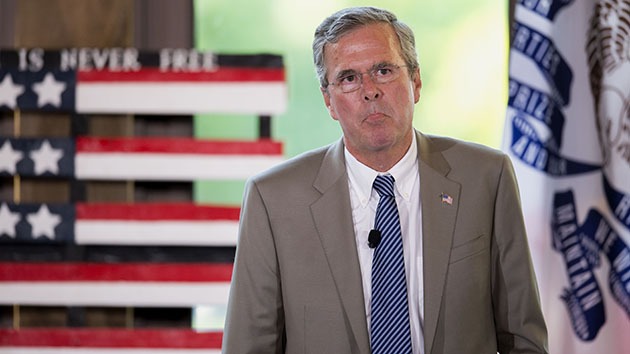 Jeb Bush has a web problem. The Republican presidential candidate has been using Jeb2016.com as his main campaign website. But as the Daily Caller noticed on Monday, visitors to a more intuitive URL for the Bush campaign will find themselves at a rival’s site.

If you type JebBush.com into your web browser, it’ll automatically redirect you to DonaldJTrump.com, the official website for Donald Trump’s presidential campaign. It’s unclear whether this fun bit of trolling comes from the Trump campaign itself, or just an overzealous fan of The Donald.

Last year I dug into how the huge crop of Republican presidential hopefuls had been slacking when it came to the all-important task of locking down domain names before opponents could snap them up. (If you doubt the significance of staking out your web presence as a presidential candidate, I point you to one Santorum, Rick.) Here’s what I found for Bush’s web savvy last May:

Former Florida Gov. Jeb Bush is also in rough shape should he decide to run in 2016. His logical campaign web address would be JebBush.com, but that website is currently blank. It’s registered anonymously, so perhaps someone in Jeb’s orbit owns the domain. But the last time it showed up on the Wayback Machine was in March 2008, when the domain automatically redirected to jeb-bush.blogspot.com. That website clearly has no relationship to the former Florida governor. An author going by the name Ryan Braun (possibly a fan of the Milwaukee Brewers outfielder?) writes bizarre parody stories. It hasn’t been updated since February 2012, but back then blogger Braun was writing posts such as “President Obama Plans on Plying Republicans with Liquor to Get Budget Passed” and “Mitt Romney Camp Hires Renowned Chuckle Coach.”

JebBush2016.com is currently sitting unused and has been registered to a New Yorker named Benny Thottam, who had an impressive amount of foresight. “In 2007 I thought of Jeb Bush being a solid candidate for 2016 election,” he told Mother Jones by email. “I do hope that he will run and I am very open about voting for him.”

Thottam doesn’t seem to have ever worked things out with the official Bush campaign, since JebBush2016.com is currently just a blank placeholder GoDaddy page. As for JebBush.com, that old blogger likely turned parody stories into a large profit. Earlier this year, CNN reported that the domain was up for sale at a $250,000 price tag. That must have been too yuuuge a cost for Bush.