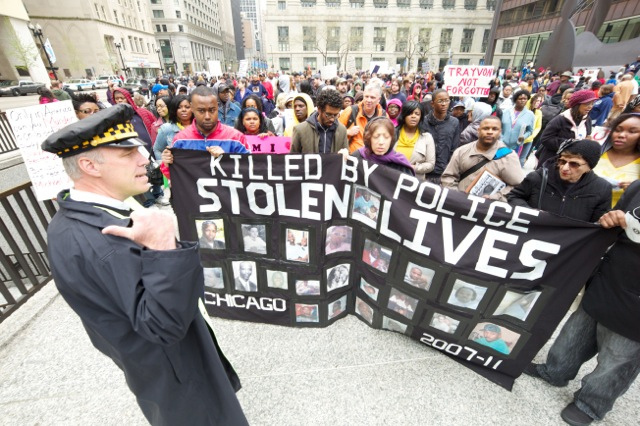 One week ago, Chicago officials finally released a disturbing video of police officer Jason Van Dyke fatally shooting 17-year-old Laquan McDonald—an incident that took place back in October 2014. The day before it was released, Van Dyke was charged with first-degree murder, but many Chicagoans are far from appeased. Residents and city council members are calling for the resignation of Cook County State’s Attorney Anita Alvarez and Police Superintendent Garry McCarthy. (Update: On Tuesday morning, Mayor Rahm Emanuel announced that McCarthy would indeed resign. “This is not the end of the problem,” he said. “But it is the beginning to the solution of the problem.”) Among other things, the mayor’s critics have been asking why officials tried so hard to keep the footage under wraps, and why it took prosecutors nearly 13 months to file charges against the officer, given what it shows. Here are 10 other things you should know about the case.

1. The police dash-cam footage starkly contradicts the initial police narrative of what happened. A spokesman for Chicago’s police union said at the time of the shooting that Van Dyke had fired his gun after McDonald lunged at him with a knife, defying an order to drop his weapon. But the video shows that McDonald was first shot while facing away from the officers, and apparently many more times after falling wounded to the ground. An autopsy report showed that Van Dyke shot McDonald a total of 16 times—in the chest, back, neck, scalp, arms, and right hand and leg.

2. Officer Van Dyke had at least 20 previous complaints and two lawsuits filed against him. Since joining the Chicago Police Department in 2001, 37-year-old Van Dyke has been accused of using racial slurs, manhandling suspects, and unjustifiably pointing his gun at arrestees. None of the complaints resulted in disciplinary action, but a jury awarded a Chicago man $350,000 after finding that Van Dyke had used excessive force during a traffic stop.

3. Chicago authorities really didn’t want people to see this footage. The police department denied more than a dozen Freedom of Information Act requests seeking release of this footage, which came from a police car’s dashboard camera, and five other videos of the incident. The footage was made public only after a freelance reporter, Brandon Smith, sued the department and a state judge ordered its release. It gets worse, though. Earlier this year, a district manager for the Burger King chain told a federal grand jury that several police officers had entered a Burger King near the scene of the shooting shortly after the incident and deleted 86 minutes of footage from the restaurant’s security cameras.

4. The city settled with McDonald’s family—shortly after the mayor’s reelection. In a highly unusual move this past April, the Chicago City Council approved a preemptive $5 million settlement with the family, which had not yet filed a lawsuit in the case. It might have settled earlier, according to a critical op-ed in the New York Times, except there were electoral considerations at play—namely, Mayor Rahm Emanuel was engaged in a tight race to keep his place at the helm. Members of the 50-member council’s black and Latino caucuses have since accused State’s Attorney Alvarez and Police Superintendent McCarthy of trying to hide the shooting from the public, and have called for their removal. They’ve promised to hold a public hearing on city officials’ handling of the case.

5. The McDonald family didn’t want the video released, either. The boy’s mother “did not want to see and has not seen the video of her son’s execution—and what mother would want to see that replayed?” a family lawyer told MSNBC. But he added that the mother has had a “mixed reaction” to the release and is “relieved” that Van Dyke is facing criminal charges. The family has called on demonstrators to keep it peaceful.

6. The way the city actually released the video was kind of sketchy. Journalists were given a one-hour window to download the video from a password-protected website. It included no audio, though audio exists. And Smith, the freelancer who successfully sued to make the video public, was barred from the press conference where city officials announced they would be releasing the video.

7. Van Dyke is the first Chicago cop in nearly 35 years to be charged with murder for an on-duty shooting. The Chicago Sun Times reports that Chicago’s Independent Police Review Authority has investigated nearly 400 police shootings since its creation in 2007, and only one of those shootings has been deemed unjustified. This is consistent with national figures: The Washington Post found in April that only 54 officers had been charged, out of thousands of police shootings that had taken place since 2005.

8. Black Lives Matter protesters blocked traffic and store entrances along the Magnificent Mile on Black Friday. Hundreds of protesters, among them the Rev. Jesse Jackson, demonstrated on Saturday as well, chanting “No justice, no profit.” The Chicago chapter of the NAACP held a protest outside City Hall on Monday, calling for Alvarez and McCarthy’s resignations. (Update: McCarthy resigned on Tuesday.)

9. The University of Chicago was on lockdown Monday after the FBI alerted campus police to a threat related to the McDonald shooting. A user posted on an online forum that he intended to shoot 16 white students—ostensibly because that’s how many times McDonald was shot. A 21-year-old Chicago man was arrested and charged in federal court for allegedly making the threat. As for Van Dyke, he faces a minimum of 20 years in prison if convicted of first-degree murder. On Monday, a judge set bail at $1.5 million; Van Dyke was released hours later, after posting a $150,000 cashier’s check.

10. Mayor Emanuel is feeling the heat. Facing mounting pressure to fire his top cop, Emanuel announced on Monday that he would appoint a police accountability task force to assess the department’s policies. The task force, whose six members were named on Tuesday, will be advised by former Massachusetts governor Deval Patrick. It will have four months to recommend changes for improving the department’s accountability, oversight, and training. The move marks a reversal in Emanuel’s stance on police oversight. In an interview with CNN in October, he said that increased public scrutiny on police had made Chicago police “fetal” and caused them to hesitate when making decisions on the job.

This article has been updated and revised.