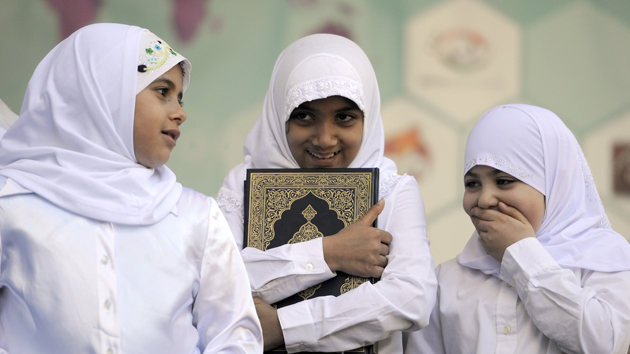 “Are you part of the 9/11 or are you ISIS?” “Did you ever kill anyone?” “Are you going to bomb this place?” These are some typical questions that 12-year-old Abdu Rrahman Mohamed says he’s been asked by his non-Muslim classmates week after week in his Long Beach, California, school, he told youth radio VoiceWaves.org last week.

Earlier this year, a high school teacher in Richmond, Texas, sent all his students home with a new study guide he had created, with the title, “Islam/Radical Islam (Did You Know).” In the study guide, which had not been approved by the school, the economics teacher presented fictional statements as if they were facts, including, “38% of Muslims believe people that leave the faith should be executed.” The teacher also wrote up instructions for what to do “if taken hostage by radical Islamists.”

These are not isolated incidents. The federal government, leaders of Muslim organizations, many Muslim students, and parents report an increase in anti-Muslim rhetoric and abuses in classrooms.

Last week, during an event hosted by the nonprofit organization Muslim Advocates, US Attorney General Loretta Lynch expressed concerns about what she sees as an uptick in anti-Muslim incidents in schools. The Department of Justice has partnered with the Department of Education to advise schools on anti-bullying measures. Lynch added that the DOJ is investigating MacArthur High School in Irving, Texas; the school in September called the police and suspended 14-year-old Ahmed Muhammad when he brought a clock he had made to school, to show it to his engineering teacher. School administrators assumed it was a bomb.

Recent figures from a 2014 California survey of students by the California chapter of the Council on American-Islamic Relations (CAIR-CA) show that 52 percent of Muslim students in California reported being the target of verbal abuse and insults. That’s twice as many students as those who report being bullied based on gender and race nationally. The survey also found that 29 percent of students who wear a hijab reported offensive touching or pulling of their headscarves. One student said, “They would call me a terrorist and ‘towel head’ and throw rocks at me.” Another student reported, “Someone threatened to kill me if I went to school on 9/11.”

Research shows that students who are bullied do worse academically, and abuse can reappear later in life; former victims have reported struggles with depression and anxiety, as well as risks of suicide.

Perhaps most concerning in the figures and news reports is the number of anti-Muslim incidents that have originated from teachers and administrators, as was the case with Ahmed in Irving. One in five Muslim students in California said they experienced discrimination by a teacher or an administrator. Of these, only 42 percent said reporting a problem to an adult made a difference.

This poses a challenge for advocates and parents who are working to combat Islamophobia in schools. While students, especially in high schools, play a large role in combating any form of meanness and abuse at their schools, adults play a greater role in setting the tone of their classrooms and enforcing positive social norms.

The rise in bullying of Muslim students is a reflection of the rising Islamophobia in the United States since 9/11. As Mother Jones‘ Edwin Rios reported last week, “The most recent FBI data indicates that hate crimes based on race, ethnicity, religious beliefs, or sexual orientation have dropped across the board—with the exception of crimes against Muslim Americans. In 2014, even as the total number of hate crimes dipped nearly 8 percent from the year before, anti-Muslim hate crimes rose 14 percent.” And on Sunday, the New York Times‘ Laurie Goodstein found that in the aftermath of attacks in Paris and the mass shooting in San Bernandino, California, “Muslims and leaders of mosques across the United States say they are experiencing a wave of death threats, assaults and vandalism unlike anything they have experienced since the aftermath of the Sept. 11 terrorist attacks in 2001.”

(Are you a Muslim student who doesn’t feel safe in your school, or is your school a good model that others should learn from? I’d love to hear from you. Email me at krizga [at] motherjones.com.)