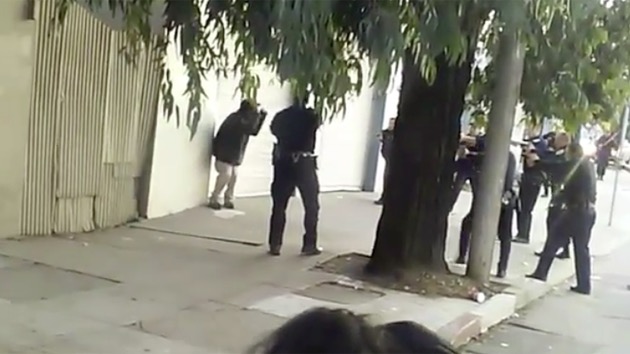 Screenshot taken from a video showing the police shooting of Mario Woods in San Francisco on December 2, 2015.

Last month, the attorney representing the Chicago police officer who shot and killed 17-year-old Laquan McDonald offered an explanation for his client’s actions: “There is this 21-foot rule,” the attorney, Dan Herbert, told CBS News. “It talks about how an individual is a significant threat to a police officer when they’re in that 21-foot boundary.”

Chicago police officials said the black teen held a four-inch folding knife on the night of the shooting last October, and that he waved it aggressively at Jason Van Dyke and other officers, ignoring orders to drop the weapon. But the video, released in late November on court orders, showed McDonald was wielding a knife but was shot with 16 bullets as he was facing away from the officers and then fell to the ground.

A week later, a video emerged showing multiple police officers in San Francisco fatally shooting another knife-wielding suspect, Mario Woods, on December 2. San Francisco PD officials said Woods was the suspect of a stabbing that occurred earlier that day, and that Woods refused to relinquish a kitchen knife even as officers ordered him to drop it, fired bean bag pellets, and pepper-sprayed him. A cell phone video from a bystander showed Woods standing against a wall, surrounded by the police with their guns drawn. As Wood began to walk away, an officer stepped in his path, and a series of gunshots rang out. Five officers opened fire, according to the SFPD.

Both McDonald’s and Woods’s deaths have sparked protests and raised questions about whether it was really necessary for the officers to open fire against suspects who had knives but didn’t appear to pose an immediate threat. And with lethal force by the police under intense scrutiny, experts are now calling attention to how the “21-foot rule” cited in the McDonald case—referring to a decades-old article about handling suspects who are wielding edged or blunt weapons—has been widely misconstrued over the years.

The concept originated with a March 1983 SWAT magazine article, “How Close Is Too Close,” by Dennis Tueller, a retired lieutenant and former firearms instructor with the Salt Lake City Police Department. “Let’s consider what might be called the ‘Danger Zone’ if you are confronted by an adversary armed with an edged or blunt weapon,” Tueller wrote. Tueller conducted a series of tests and found that in the time it took for the officer to unholster, aim, and shoot his gun—1.5 to 2 seconds—the attacker could cover a distance of 21 feet.

“The ’21-foot rule’ concept spread throughout the law enforcement community almost like a virus.”

Tueller never called this idea a rule, but that’s how it became known. “The ’21-foot rule’ concept spread throughout the law enforcement community almost like a virus,” Ron Martinelli, a retired cop and forensic criminologist, wrote in a March 2015 Law Officer article about the so-called rule. “Tueller never imagined when he designed his simple firearms training drill that, 30 years later, the 21-foot rule would eventually become a police doctrine that is taught and testified to hundreds of times a year.”

The problem is that interpretation of Tueller’s concept has been too simplistic, explains Seth Stoughton, a professor at the University of South Carolina School of Law and a former police officer in Florida. “If the officer is already aware that a person has a weapon and pointed at the suspect, then the officer needs much less than a second and a half to make a decision to fire,” he says. “But it’s also dangerous for cops because, in some cases, 21 feet doesn’t give enough time to properly respond to an aggressive threat.” He added, “Nevertheless, it remains enshrined in policing.”

In recent years, Martinelli and other policing experts have raised concerns. In an interview with the Marshall Project’s Beth Schwartzapfel last month, even Tueller tried to address the misinterpretation of the concept. “I have more than a mild disagreement with that term,” Tueller said.

The “21-foot rule” isn’t typically required curriculum in police academies, but as Stoughton and others note, it remains widely cited and taught as part of informal training seminars. After revisiting Tueller’s research, Martinelli said he found “no forensic testing, examination, reconciliation of data, or scientific oversight of a research model was ever conducted.” He added, “The truth is that the 21-foot rule should not be considered to be an absolute rule at all.”

Despite the recent efforts to clarify it, Stoughton says, “the ’21-foot rule’ remains one of the persistent and frustrating urban myths of law enforcement training.”

Curtis J. Cope, a policing consultant who previously served as an officer and a training instructor, says he believes most officers are well aware that the “21-foot rule” is not a rule in and of itself, and that they operate based on the departmental policies and laws governing the use of force. “If you’re going to be faced with a knife, you need to know the potential for you being stabbed or cut,” he says. “You need to be able to figure out what types of defenses you’re going to be able to utilize based upon the circumstances that you’re faced with.”

“Officers get very little training in confronting suspects other than using a firearm.”

But many police officers in America are trained to draw their guns when facing a potentially lethal threat, Stoughton says, even though the threat to officers from suspects holding edged weapons—such as knives—has “decreased substantially” over the past few decades. “Officers get very little training in confronting suspects other than using a firearm,” he says, because much of their training focuses on deadly encounters, when in reality officers are more likely to face less lethal or nonlethal threats.

A recent survey of 281 police agencies found that young officers spend far more time getting trained on firearms and defensive tactics than on de-escalation tactics and crisis intervention. But officers need more training on how to contain and disarm suspects without a gun, Stoughton says. He points to past examples such as police in the United Kingdom disarming a man waving a machete by closing in on him with riot shields, and Seattle police disarming a man with a knife using a ladder after an 11-hour standoff. “Without that training and experience, officers fall back on the weapon that they know they can rely on—and that’s a firearm.”