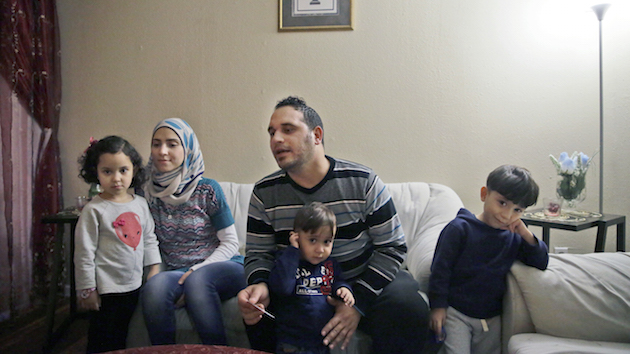 A lawsuit filed by the state of Texas on Wednesday has prompted yet another legal and logistical stalemate over attempts to resettle Syrian refugees in the United States.

The Texas Health and Human Services Commission sued the federal government and the International Rescue Committee, a human rights group that helps resettle refugees in the United States, over the IRC’s plans to relocate a family of six Syrians to Dallas on Friday. Texas has taken in 243 Syrian refugees since the start of 2011—more than any other state but California—but Texas Gov. Greg Abbott, a Republican, was one of 31 governors who said taking in Syrians would pose a safety risk following the terrorist attacks in Paris.

“The point of this lawsuit is not about specific refugees,” said Texas Attorney General Ken Paxton in a statement. “It is about protecting Texans by ensuring that the federal government fulfills its obligation to properly vet the refugees and cooperate and consult with the state.”

Other states, most notably Indiana, have threatened to pull funding from refugee resettlement groups that place Syrians in their states. But the Texas lawsuit is the first legal action taken by any state attempting to bar Syrians. The state’s court filing quotes the Refugee Act of 1980, which says that “in providing refugee assistance…local voluntary agency activities should be conducted in close cooperation and advance consultation with State and local governments.” Paxton claimed on Wednesday that resettlement groups and the federal government had not conducted such consultations, and the Health and Human Services Commission has suggested that the government of Texas has a right to reject any refugees it does not approve.

Resettlement groups say Texas’ arguments are false. The IRC did not respond to requests for comment, but other resettlement organizations have told Mother Jones that routine consultations with state governments do take place. “We are contractually mandated to do community consultations in every location where we do resettlement before our numbers get approved for any given year,” says Erol Kekic, the director of the Immigration and Refugee Program at Church World Service, a national resettlement agency. “That includes talking to elected officials, that includes talking to law enforcement, school systems, health systems, etc.”

The groups also contend that states still cannot unilaterally demand that resettlements stop. “The Refugee Act of 1980 does not give the state any kind of veto power,” says Lavinia Limón, president and CEO of the US Committee for Refugees and Immigrants. “They don’t have any authority. It’s a consultative process.”

What will happen with the six refugees on Friday is unclear. The Dallas Morning News reported that the family due to arrive on Friday is related to refugees who arrived in the area in February, and resettlement groups have previously told Mother Jones that they would not change resettlement plans for refugees who have existing family connections in a specific area. But neither the IRC nor Texas Refugee Services, a local resettlement group, responded to requests for comment, and Bryan Black of the Texas HHSC said his agency does not know if the family will arrive in Texas.