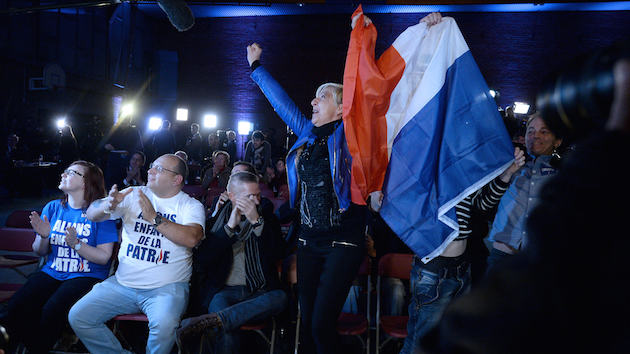 Update, 12/14/15, 11:15 am: Last week, the National Front was poised to take as many as six of France’s regional governments after the first round of elections. But the far-right party lost in all six of those regions during Sunday’s second round, falling instead into third place behind the center-right Republicans, who jumped almost 15 points in the overall voting, and the Socialists. Party leader Marine Le Pen, who lost her own region in a landslide, still cast the results as good news of a kind. “By tripling our number of councillors, we will be the main opposition force in most of the regions of France,” she said in her post-election speech. The National Front actually won more votes than in the first round, but voters flocked to the Republicans to block the National Front from power.

The refugee crisis in Europe has fueled right-wing political gains on the continent for months, even in tolerant Germany and famously liberal Sweden. But the most significant far-right victory so far came this weekend in France, where the nativist National Front party won the most votes in local elections held across the country.

The National Front, led by former presidential candidate Marine Le Pen, has been on the French political scene for decades and has enjoyed major successes before. Former National Front leader Jean-Marie Le Pen, the father of Marine, reached the 2002 presidential run-off, which he then lost badly. The party also placed first in last year’s elections in France for the European Parliament, gaining 25 percent of the vote. But the National Front’s victory in regional elections on Sunday was its largest success ever. The party captured 28 percent of the national vote and won six of France’s 13 mainland regions, making it possible that the National Front may govern significant parts of France for the first time. Pre-race polls suggested the party would win only two regions.

Le Pen’s hardline stances on Islam and immigration resonated with voters after the terrorist attacks in Paris last month. “Islamist fundamentalism must be annihilated,” she said after the attacks. “France must ban Islamist organizations, close radical mosques and expel foreigners who preach hatred in our country as well as illegal migrants who have nothing to do here.” The National Front’s greatest success came in its traditional stronghold of Nord-Pas-de-Calais-Picardie in northern France, the region where thousands of refugees have gathered in a makeshift camp called “the Jungle” in the town of Calais.

The National Front’s victory isn’t yet secure. A second round of run-off voting will happen this Sunday, and frightened left-of-center voters may shift their votes to the Republicans, the center-right party that finished second, to block the National Front from taking power. The Socialists, who finished third, said they will pull their candidates from two key regions to encourage tactical voting against the National Front.

But no matter the result in the second round, Sunday’s vote is a clear warning that the National Front may be close to holding real power in France. With a presidential election in 18 months and incumbent François Hollande scoring only about 30 percent in job approval ratings, Le Pen looks more and more like a viable candidate for France’s top job.