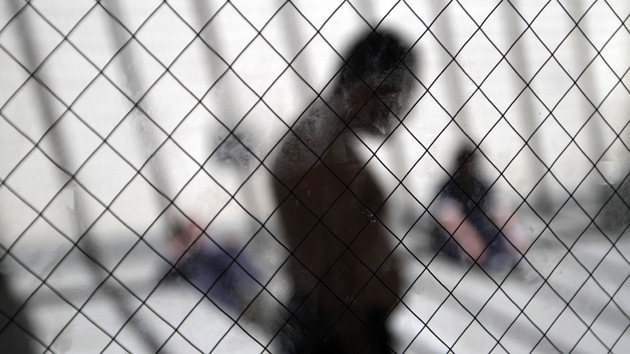 Men sit in the sun in the health ward at the Otay Mesa immigration detention center in San Diego in 2010. Some immigrants at the center are currently taking part in a hunger strike. Gregory Bull/AP

After spending months holed up in detention centers, more than 100 undocumented immigrants in California and Alabama launched a hunger strike on the evening before Thanksgiving. The following Monday, they were joined by dozens of other frustrated immigrants at three more detention centers in California, Colorado, and Texas. Their protest is the latest in a wave of hunger strikes at immigrant detention facilities across the country.

“This is not how we’re supposed to be treating folks who are seeking asylum.”

Many of the estimated 34,000 immigrants detained in the United States faced persecution in their home countries. But since making it to American shores, some have had to contend with long waits in detention before arguing their cases for asylum in front of immigration judges. Now some of them are pushing back against what they describe as poor conditions and prolonged—and at times indefinite—periods of detention. Since early October, more than 1,000 immigrants and asylum seekers have taken part in the movement, according to advocacy groups.

Here’s what we know about five recent protests:

When: The protest called #FreedomGiving began on November 25, the evening before Thanksgiving, at three detention facilities in California and Alabama. Asylum seekers at three other facilities in California, Colorado, and Texas joined on November 30, according to the DRUM South Asian Organizing Center, which has been helping them coordinate their strike. The strike is ongoing.

Who: About 150 people in at least six detention centers. Most of the participants hail from South Asia—especially from Bangladesh. Others come from parts of Africa. They are all seeking asylum after fleeing unsafe conditions at home, DRUM says. An official from US Immigration and Customs Enforcement (ICE), which runs the detention centers, would only confirm on Wednesday that 92 people at three centers in Alabama and California were participating. She said a person must refuse food for 72 hours before a protest can be considered a hunger strike.

Why: They’re calling for an end to the indefinite detention and deportation of undocumented asylum seekers, says DRUM’s executive director, Fahd Ahmed. He says all the strikers have demonstrated “credible fear” of persecution in their home countries, which is the first step in applying for asylum in the United States. He says they have also been detained for more than six months—some of them for as long as two years—even though ICE has a policy to automatically consider immigrants with credible fear for parole right away. As a result, they’ve been forced to fight their asylum cases from inside detention centers, usually without access to the lawyers they’ll need to win, DRUM says. Some strikers have lost their cases and are supposed to be deported, Ahmed says, but their embassies haven’t been able to obtain their travel documents, so they’re “stuck in limbo.”

The reason why most of the strikers are from Bangladesh, he adds, is because a significant number of Bangladeshi asylum seekers have lost their cases due to ties with the Bangladesh Nationalist Party, an opposition political party that some judges within the US Department of Homeland Security consider to be a terrorist organization—a categorization that immigrant advocacy groups deny. “They know they face imminent violence if they’re sent home,” Ahmed says. “Essentially they’re saying, ‘If you send us back we’re going to die, so we’d rather die by hunger strike here.'”

When: One hunger strike started at Adelanto’s West Facility on October 30, and another began at the East Facility on November 4. The first strike ended in early November and the second on November 13 after one of the participants collapsed, according to the Los Angeles Times. Some of the strikers are now participating in the #FreedomGiving strike, Ahmed says.

Who: About 390 people from Central America, South Asia, and Africa, according to DRUM. An ICE spokesperson said just 22 detainees were involved.

Why: These strikers are also protesting their detention and conditions at the center, which is California’s largest immigrant detention facility. Among their demands is better medical care, the LA Times reported. In July, members of Congress sent a letter to ICE, pointing out cases of alleged medical neglect and mistreatment at Adelanto. The letter highlighted the 2012 death of a Mexican detainee named Fernando Dominguez with pneumonia, and the death of a Salvadoran detainee with cancer earlier this year.

When: Twenty-seven women started the strike on October 28, and hundreds more joined over the following days, according to advocacy groups such as DRUM and Grassroots Leadership, a Texas-based organization that fights for-profit incarceration. Joy Diaz, a producer at the Texas Standard, reports that the strike is now intermittent, with some women refusing meals and others opting to eat.

Who: Advocacy groups and news organizations say as many as 500 women from El Salvador, Guatemala, Nicaragua, Honduras, Mexico, Brazil, and Europe have participated, though ICE has denied this. “There has never been a hunger strike. It’s been very misleading,” a spokeswoman told the Texas Observer. Local reporters say they have yet to gain access to the detention facility, so confirming whose version of the story is correct—the advocates’ or the officials’—has been difficult.

Why: The strikers were calling for their release from detention, though they also complained of alleged abusive treatment by guards and poor medical care. In a handwritten letter posted on the website of Grassroots Leadership, one of the strikers wrote, “I can’t take any more of this punishment. I’m dying of desperation from this injustice, from this cruelty.” An ICE official declined to comment on these allegations, saying the agency could not discuss specific cases due to privacy laws.

When: The strike began October 18 and lasted 11 days, according to DRUM.

Who: Fourteen detainees from India and Bangladesh

Why: These strikers, also calling for their release from detention, have complained of receiving spoiled food or not getting enough food, says Ahmed of DRUM, which has been working with them. They also say they’ve received harsh punishments, including solitary confinement, for minor mistakes or infractions. The ICE official told Mother Jones that more information was needed to comment on specific allegations, but added that ICE has “a strict zero-tolerance policy for any kind of inappropriate behavior in its facilities and takes any allegations of such mistreatment seriously.” The official said employees at LaSalle eat the same food as the detainees, and that the facility is inspected routinely, most recently in September, and has always been found to uphold ICE standards.

When: The protest started October 14 and lasted about a week, according to DRUM.

Who: Fifty-four South Asian detainees from Bangladesh, Pakistan, and Afghanistan

Why: Ahmed says many detainees at this facility lost their asylum cases but were not given a copy of the immigration judge’s order, which is needed to file an appeal. A few days into the hunger strike, the strikers were given these orders, he says, but by that point, it was too late: “Unless the detainees had their own lawyers, which only a few of them did, all of them…missed their appeal deadline.” The ICE official declined to comment on these allegations, saying that although these individuals are in ICE custody, their asylum cases are adjudicated by the immigration court system, which is run by the Department of Justice’s Executive Office for Immigration Review.

What have all these strikes led to so far? Immigration officials say they are closely keeping tabs on the strike that began before Thanksgiving. “U.S. Immigration and Customs Enforcement (ICE) takes very seriously the health, safety, and welfare of those in our care and we continue to monitor the situation,” Jennifer Elzea, a spokeswoman for ICE, told Mother Jones in an email, adding that medical and mental health care providers were on staff to monitor, diagnose, and treat detainees. At El Paso in October, immigration officials released some of the strikers from detention.

But Ahmed from DRUM says some hunger strikers have faced retaliation, while others have been placed in solitary confinement. An ICE official said the agency had a protocol for responding to hunger strikes that in some cases included the isolation of hunger strikers when medically advisable. The official said it’s not a form of retaliation, but rather an effort to monitor a person’s health. But advocacy groups have decried ICE’s response to the protests. “This is inhumane,” says Victoria Mena, a monitor with the group Community Initiatives for Visiting Immigrants in Confinement, which has been working with the hunger strikers at Adelanto. “This is not how we’re supposed to be treating folks who are seeking asylum.”