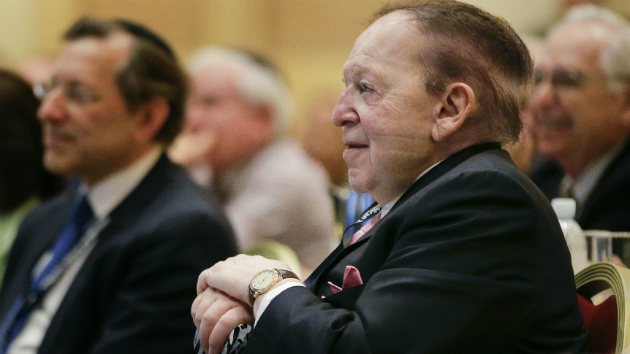 The mystery surrounding the secretive purchase of Nevada’s biggest newspaper has finally come to a close. Fortune reports that multiple sources familiar with the deal have confirmed that Las Vegas casino owner and GOP megadonor Sheldon Adelson bought the Las Vegas Review-Journal last week, but attempted to keep the purchase hidden.

Speculation has been rampant since the newspaper’s management told staff last Friday that the paper had been sold for $140 million to a newly incorporated Delaware-based shell corporation. The paper had only just been sold by its longtime owner for $105 million in February to Gatehouse Media, a national chain that is publicly traded. The premium price paid by the new owner—at a time when print newspapers are seen as disastrous investments—raised red flags, as did the comments made to newsroom staff by a man named Michael Schroeder, who was introduced as a “manager” for the shell corporation.

Schroeder told the staff that the new owners were “undisclosed financial backers with expertise in the media industry,” but declined to specify. In the newspaper’s first story on the sale, an initial draft included a quote from Schroeder in which he appeared to dismiss concerns of the employees by saying, “They want you to focus on your jobs…don’t worry about who they are.” But the newspaper presses were literally stopped to edit the article and the quote was pulled, as were other critical comments, before a new version of the article was printed.

Today, the Review-Journal published its own front-page article highlighting the outrage in journalism circles over the mysterious sale—there are no other newspapers of any significance in the United States whose owners are not known—as well as clues that Schroeder has links to Adelson. The paper reported that Schroeder had worked with another man who now runs a news service that distributes content from one of the newspapers that Adelson owns in Israel.

Fortune’s report relies on “multiple sources familiar with the situation” who said the buyer was Adelson. One informed source told Mother Jones earlier this week that Adelson had privately mused about buying the newspaper in the past, and the Review-Journal‘s report today includes details that Adelson attempted to purchase the newspaper in February when it was last sold, but was unable to.

Adelson’s representative did not respond to requests for comment earlier this week on whether he was the purchaser.

Adelson, who has donated more than $100 million to almost exclusively conservative political causes, including more than $92 million alone in the 2012 presidential election to try to defeat President Barack Obama in his reelection, has not been shy about using his Isreali newspapers as a political cudgel. Adelson founded Israel Hayom, a free daily newspaper that supports Isreali Prime Minister Benjamin Netanyahu, of whom Adelson is a fervent supporter. The paper is now the largest-circulation newspaper in Israel. Earlier this year, it published numerous enthusiastic articles about Sen. Marco Rubio of Florida, rumored to be Adelson’s favorite GOP candidate for the 2016 election.

While no official confirmation of Adelson’s role has been made, questions are already swirling about why the secrecy was necessary. Ultimately, only Adelson knows, but the Las Vegas paper might be of particular use to Adelson, politically speaking, for several reasons. The Review-Journal is the largest-circulation paper in the state, making it a powerful tool in the run-up to the Nevada caucus, which will be in mid-February and is one of the first on the primary schedule (third for Democrats and fourth for Republicans). Additionally, Adelson is deeply embroiled in a battle over whether the federal government should ban internet gambling: He supports a ban, but stands nearly alone in the casino industry in that position. Sympathetic management of the Las Vegas paper could give him a needed boost in the fight.