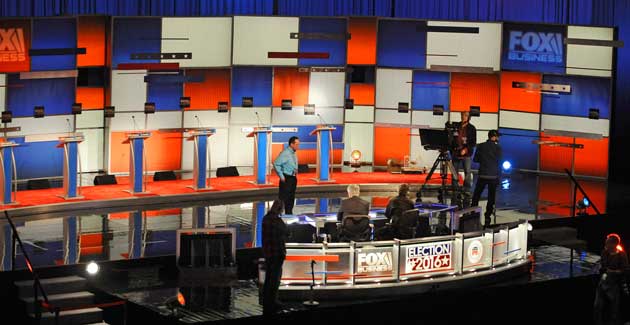 On Thursday night, the Republican 2016 wannabes will once again gather for a debate, with the Iowa caucuses and the New Hampshire primary just weeks away. Though each of these candidates has been on the debate stage multiple times this campaign—and has occasionally granted interviews to reporters—there are still many questions that they have not had to address. So editors and reporters at Mother Jones have compiled a short list of queries that we’d put to the GOP candidates. Kudos to Fox Business Network if any of these get asked.

* When you appeared on the talk show of conspiracy theory promoter Alex Jones, you told him that his “reputation is amazing” and added, “I will not let you down.” Jones has championed many conspiratorial notions, including that the massacre at Sandy Hook Elementary School never happened and that the attacks on the World Trade Center were an inside job. So what’s “amazing” about him?

* Why did you cut a deal with Amar Mammadov—an Azerbajani businessman accused of cronyism and profiting off his family’s ties to the government—to open a new Trump hotel in Baku?

* How many new government employee will be needed to implement your plan to bar Muslims from entering the nation? Given that any would-be terrorist who happens to be Muslim would likely lie about his or her religion to reach the United States, you couldn’t rely on the statements provided by foreigners trying to get into the United States. So then wouldn’t you need an army of federal workers to investigate each person coming into the United States? And how much would this anti-Muslim program cost?

* Can you now explain what the nuclear triad is?

* Your father, Rafael Cruz, who is an evangelical pastor, has often resorted to fiery, if not extremist, rhetoric. He has called the United States a “Christian nation,” and he has said that President Barack Obama is an “outright Marxist” who “seeks to destroy all concept of God” and should be sent “back to Kenya.” Most of us would not want to be judged on the basis of what a relative says. But you have extensively used your father as a campaign surrogate and to recruit religious leaders as supporters of your campaign. Would you disavow these comments?

* You have described Trump’s efforts to raise questions about you eligibility to be president—due to your birth in Canada—as a “silly” sideshow. But some of your own supporters, such as Rep. Steve King of Iowa, have questioned whether Obama was born in the United States and whether he is eligible to be president—even though, like you, his mother was indisputably a US citizen. Have King and other conservative birthers engaged in a silly sideshow?

* As a candidate, you have advocated tort reform—that is, imposing a cap of $750,000 on punitive damages that can be awarded in cases of malpractice or corporate malfeasance. Yet when you were a lawyer in private practice, you twice worked on cases to secure $50 million-plus jury awards in tort cases. Why the double standard?

* You’ve supported background checks for gun purchases in the past. Now you’re attacking the president for a similar proposal. Why have you flip-flopped?

* In a recent campaign ad, you attacked Obama for spying on Israel. Do you believe the US government should never mount any intelligence-gathering operations regarding Israel and that the United States should not spy on Israel to detect possible Israeli intelligence actions aimed at the US government or American corporations?

* More than half of every dollar your campaign has raised has gone into the bank accounts of the consultants you’ve hired to raise that money. Why should conservatives continue opening up their checkbooks for a cause that’s mainly enriching political professionals?

* In a 2013 book, you wrote that people who commit health care fraud should suffer “some very stiff penalties…such as loss of one’s medical license for life, no less than ten years in prison, and loss of all of one’s personal possessions.” Yet you are in business with a former dentist who pleaded guilty to health care fraud. How does a candidate who campaigns on honesty and integrity explain this?

* Please name your favorite surgeon general and explain your choice.

* Paul Wolfowitz, a deputy secretary of defense in your brother’s administration, was one of the architects of the Iraq War, and prior to the invasion he made a series of predictions about the war that were wildly inaccurate. Why did you sign him up as a foreign policy adviser for your campaign?

* Your administration in New Jersey has vigorously fought open-records requests for a wide variety of government documents: your schedule, your travel records, and contracts you handed out following Superstorm Sandy. Do you have a problem with transparency?

* You’ve said, “When you die and get to the meeting with Saint Peter, he’s probably not going to ask you much about what you did about keeping government small. But he is going to ask you what you did for the poor. You better have a good answer.” But as governor you have decreased food aid for the poor in Ohio in a manner that disproportionately affects minority communities. What do you think Saint Peter will say to that?