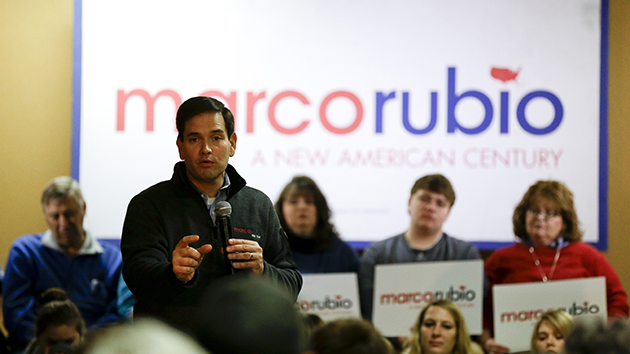 Crisscrossing Iowa in the final days before the February 1 caucuses, Sen. Marco Rubio (R-Fla.) has honed his final pitch to voters. It comes down to three words: “I can win.” The unspoken message is that the GOP’s current bomb-throwing front-runners, Donald Trump and Ted Cruz, have no chance of prevailing in the general election. But unlike his rivals, Rubio tells voters, he can beat the Democratic nominee in November.

Rubio is currently a distant third in the polls, behind Trump and Cruz. But he’s trying to catch up in Iowa by playing the part of the anti-Trump. At stops in Pella, Oskaloosa, and Marshalltown on Tuesday, Rubio pitched himself as the candidate who can unite the Republican Party, win new converts to conservatism, and take back the White House from the Democrats. In his telling, President Barack Obama has pitted Americans against each other. In contrast, Rubio casts himself as a candidate who will bring the country together. “I will never pit Americans against each other,” he said at a stop in Pella.

His message seems to be resonating with the crowds who came out to hear Rubio talk. “I’m gonna have to go with Rubio,” says Charlotte Beyer, 60, at a Rubio town hall in Pella. Beyer sees Rubio as someone who is socially conservative but can appeal to voters who are not religious as well. “I want a good conservative who is not so far right he can’t get other votes.”

“If nominated, he would appeal to a lot of people,” notes Pat Fuchs, a retired teacher who drove 40 miles to see Rubio speak in Marshalltown. “He’s the best candidate.”

For a party that has lost the last two presidential elections, electability could prove a strong argument in the final days of the race. Though Iowa GOP voters are taken with Trump and Cruz, who offer a more bombastic style, Rubio is hoping enough of them will come to their senses by Monday so he can at least finish a strong third.

Asked who is likely to win the GOP caucuses on Monday night, a woman in Marshalltown who asked not to be identified said she was “fearful it will be Trump.” Rubio wants to bring people together, she said. “I don’t see Trump doing that.”