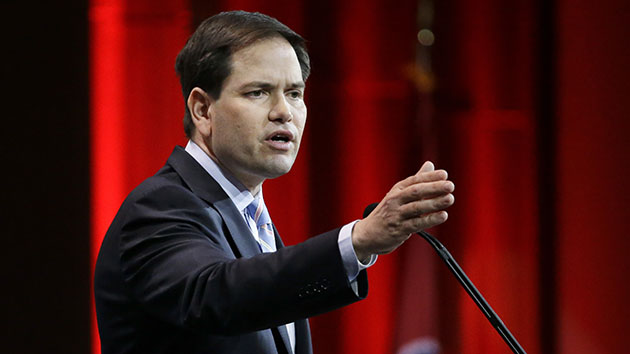 On Tuesday, Sen. Marco Rubio (R-Fla.) slammed President Barack Obama’s new executive actions aimed at enhancing gun safety—but the GOP candidate was attacking an approach to guns that he once supported as a candidate in Florida, when he endorsed “reasonable restrictions” on firearms.

After Obama announced the series of new gun-control steps, Rubio exclaimed, “Barack Obama is obsessed with undermining the Second Amendment…Now this executive order is just one more way to make it harder for law-abiding people to buy weapons or to be able to protect their families.” And in a campaign ad, Rubio went further in assailing the president: “His plan after the attack in San Bernardino: take away our guns.”

Obama’s new measures would not take away guns; the most prominent executive action is aimed at limiting the number of gun sales that occur without background checks by requiring more gun sellers to register as dealers and vet their customers. And background checks is a policy that Rubio has supported in the past.

When Rubio first ran for the Florida state House in 2000, he told the Miami Herald that he supported “reasonable restrictions” on guns, including background checks and waiting periods for gun purchases. Ten years later, this comment was used against Rubio during his Senate primary campaign against then-Republican Charlie Crist. The Crist camp, pointing to Rubio’s 2010 statement, accused him of supporting gun limits. Rubio’s spokesman dismissed the significance of Rubio’s earlier statement, saying, “It’s basically a restatement of his support for the current law.”

During his eight years in the Florida legislature, Rubio backed much of the National Rifle Association’s agenda. He co-sponsored the state’s Stand Your Ground law, which became the subject of a nationwide debate following the shooting death of Trayvon Martin. And, as a senator, Rubio recently received an A rating from the NRA. But Rubio has a few times wavered from the NRA’s hardline. In the Florida legislature, he drew the organization’s ire when he took a tepid approach to supporting a bill allowing Floridians to bring firearms to work if they leave them in their cars. (He ultimately voted for the measure). And after the Sandy Hook shooting in December 2012, he flirted with supporting measures to prevent convicted felons and the mentally ill from obtaining firearms—actions the NRA opposed. He voted against the background-check bill that ultimately came to the Senate floor the following spring.

As a presidential candidate, Rubio has positioned himself as an ardent champion of gun rights and does not talk about the need to preserve or enhance “reasonable restrictions” on guns. His campaign website states that “[n]ew gun laws will do nothing to deter criminals from obtaining firearms.” Asked whether he still supports “reasonable restrictions,” Rubio’s campaign did not respond.