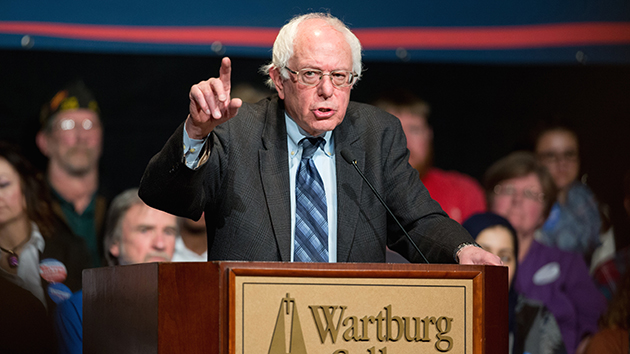 With the Democratic presidential race neck and neck in the early states of Iowa and New Hampshire, the volleys between Hillary Clinton and Bernie Sanders are heating up. Clinton has been slamming Sanders for his positions on gun control and health care. And now Sanders is firing back—in a way—and coming close to breaking his career-long vow to eschew negative ads.

In his latest ad, called “Two Visions,” Sanders contrasts his approach to Wall Street reform with another “Democratic view”—though he does not mention Clinton by name. In the ad, the Vermont senator gazes into the camera and says, “There are two Democratic visions for regulating Wall Street. One says it’s okay to take millions from big banks and then tell them what to do.” That certainly could be interpreted as a dig at Clinton for collecting donations from Wall Street over the years. Sanders continues: “My plan: Break up the big banks, close the tax loopholes, and make them pay their fair share.”

This wouldn’t be the first time that Sanders has highlighted Clinton’s ties to Wall Street. (Remember the second debate?) But this ad is the closest the Sanders campaign has come to going back on its promise not to hit Clinton with negative ads. In June, Tad Devine, a top Sanders strategist, told Mother Jones that the campaign wouldn’t even engage in comparison ads.

So, Devine notes, [Sanders] will not directly criticize or poke at Clinton. For sure, no personal attacks or cheap shots. “That won’t help him,” Devine says. “He rejects the status quo of politics.” Sanders won’t even do a straight-up contrast ad—as in, Bernie Sanders believes X about subject Y, but Hillary Clinton believes Z. “If we do that, we’re done,” Devine says. “If we do a classic comparative ad, it’s over. We’ll have to be smarter.”

This new ad is not a true comparative ad—given that it doesn’t name Clinton—but it’s getting close. And there are still two weeks to the Iowa caucuses.