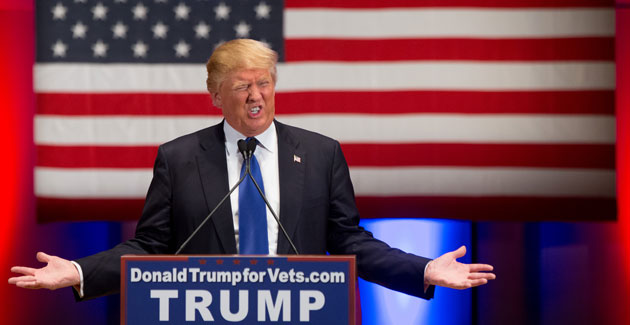 When Donald Trump announced, with just two days’ notice, that instead of attending the Republican debate Thursday night he would host a rival event at Drake University in Des Moines, the question was, would his supporters flock to him? Would they come from across the city, the state, even around the country to see him?

Judging from the line outside his event, billed as a fundraiser to support veterans, it seemed that they had. The queue stretched so far back that you couldn’t make out the end of it, and people waited in the cold for hours to get in (and many were ultimately turned away when the venue reached capacity). If Trump could muster this much support at a moment’s notice, you would think he should be well on his way to winning the Iowa caucuses. But on further inspection, the impressive crowd was composed largely of Drake University students, few of whom actually seemed prepared to caucus for Trump—or even to caucus at all.

“I’m just here cause I think he’s hilarious,” said one Drake student, who declined to give her name. Her friend, a 20-year-old Drake student wearing a “Make America Great Again” baseball cap, agreed. The reason “Drake students are attending tonight is more the comedic factor,” she said. “We’ve had all these very serious events with random raffles and drawings, and then Trump shows up on campus and he gives out around 3,000 tickets on an app to an event happening in an auditorium that holds around 700 people.”

Even among students who identified as Republicans, few were planning to turn out for Trump. The student with the “Make America Great Again” hat said she probably won’t caucus for him. She just bought the hat because it looked “cool” and it was “really cold.”

Standing ahead of her was Michael Harvey, a junior and a Republican. He agreed that the event was basically a spectacle. Standing in line, he said, “I’ve seen at least 40 Drake students that I know personally that are not supporting Donald Trump that are here tonight.” Harvey hasn’t decided which Republican he’ll caucus for yet, but he’s already ruled out the bombastic real estate mogul. Harvey was standing in line with his friend Travis Brauer, a fellow junior and Republican who did not support Trump.

“I want to see Donald Trump,” said Taylor Zant, a Drake junior who was excitedly braving the cold. “I just think it would be awesome to see him. I mean, who gets to say they get to see Donald Trump on their own school campus? I think it’s pretty cool.” But Zant won’t be caucusing on Monday. She’s headed to Prague to study abroad.

“I just thought it would be an interesting opportunity,” said Michael Dolan, a 20-year-old Drake student. “And tickets were free, too.” He said he could could see himself supporting Trump, but he doesn’t plan to caucus on Monday. “I have class, schoolwork and such.” Dolan’s friend, a bearded senior named Philip Dgraffenreid, also will not be caucusing. “I’m not really firm on anything so I’m just gonna hold out till the elections” in November, he said. But he didn’t think many of his fellow students would be caucusing for Trump, either. Drake, he said, is a pretty liberal school. He feels like a “lonely Republican.” Prague-bound Zant agreed. “There’s like Bernie Sanders signs everywhere; everyone’s a Democrat here, I feel like,” she said.

When I spotted a young man wearing just a long-sleeve shirt waiting out in the long line, I thought I had perhaps found a die-hard fan. But he wasn’t. “I’m still deciding,” said Tim Celander, a 23-year-old engineer who, after going to college in North Dakota, found the Iowa weather balmy (and he left his jacket in the car). But he said he won’t be backing Trump. “I can’t think of any policies that I agree with him on,” said Celander. He’s leaning toward Marco Rubio or John Kasich instead.

This is not to say that there were no Trump supporters in the crowd—only that they were hard to find. There was Gavin Yusten, 22, who when asked if he supported Trump responded: “Probably, pro-America. That’s about it. I’m not a big politics guy.” But Gavin, who was in town to visit his girlfriend who attends Drake, actually lives in Lincoln, Nebraska. So he can’t caucus for Trump. And there was Clay Rogers, 21, who identified himself as “Trump’s biggest supporter” because “he puts America first, he puts the American worker first, he protects our borders.”

The Trump supporters at the rally tended to be older then the largely college-aged crowd. Lisa Gomez, 45, of Des Moines is a Trump supporter, she said, because “he’s self-funded” and therefore “not beholden to anybody.”

Near the back of the line were two older-looking men, whom I approached thinking they might be Trump die-hards. “No, by no means,” said one of them when I asked if he would vote for Trump. “I’m curious about the experience, and I’m curious about his supporters.” He won’t be caucusing on Monday, but if he were, he would go for Bernie Sanders. His friend, who also did not want his name in print, said he had been “dragged” to the event and was supporting Democrat Martin O’Malley. “We’re few and proud,” he said. His second choice is Hillary Clinton.