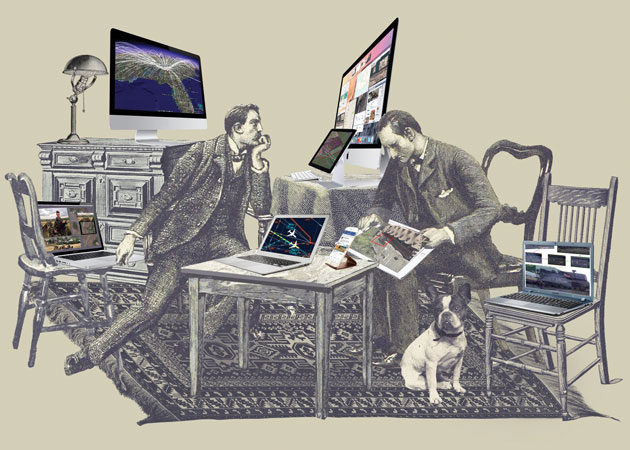 It was late 2014. Pro-Moscow separatists in eastern Ukraine had been attacking government forces, and the Russian military was massing along the border. And though the Kremlin was insisting that it wasn’t operating inside Ukraine, Eliot Higgins was uncovering strong evidence to the contrary—from the comfort of his desk. As Higgins, an independent intelligence analyst in Leicester, England, noticed that Russian soldiers were posting selfies and candids to social-media sites like VKontakte, Russia’s version of Facebook, he came to realize the images could blow apart the official story.

Higgins scoured the soldiers’ images and videos for hints of where they had been shot: road signs, landmarks, numbers on military vehicles, the angles of shadows. He started to uncover proof of cross-border artillery strikes and Russian tanks trekking into eastern Ukraine’s war zone. One photo showed a mound of rubble in front of a row of houses with green fences. Using images from Google Earth and the photo-sharing site Panoramio, Higgins was able to determine exactly where and when the photo had been taken. The mound was a Ukrainian checkpoint. The houses were in the Ukrainian town of Vuhlehirsk, less than 10 miles from a major battle between government forces, separatists, and Russian troops.

The 36-year-old Higgins runs the investigative website Bellingcat.com, whose name comes from “belling the cat,” an expression for a seemingly impossible task. It’s the online home of a dozen citizen journalists who trawl the internet’s vast reservoir of publicly accessible material to investigate conflicts thousands of miles away. Using YouTube, Facebook, and Google Earth, they can pinpoint the locations of everything from artillery strikes to executions, or verify the timing of a missile launch caught on camera by analyzing the angles of shadows cast on buildings as if they were sundials. Last May, the Atlantic Council, a Washington-based think tank, teamed up with Bellingcat to publish a report called “Hiding in Plain Site.” It revealed that, despite the Kremlin’s claims, the Russian military had been operating in Ukraine.

“During the Cold War we spent billions of dollars every year trying to counter propaganda,” says Patrick Skinner, a former CIA case officer who now works at the Soufan Group, a security consulting firm. “These guys, who often aren’t even getting paid to do this, sit at their laptops wherever they are, and they flat-out proved the Russians were lying. They debunked the Kremlin’s propaganda. That’s amazing.”

“These guys sit at their laptops wherever they are, and they flat-out proved the Russians were lying. They debunked the Kremlin’s propaganda. That’s amazing.”

Higgins is part of a small army of armchair analysts who are venturing into territory occupied by government intelligence agencies by virtually investigating conflict zones where access is nearly impossible.

“We are utilizing the fact that people share,” says Maksymilian Czuperski, the Special Assistant to the President at The Atlantic Council, who worked with Higgins on “Hiding In Plain Site.” “With all of these mobile devices, people leave digital breadcrumbs everywhere they go.”

In Albania, Gjergj Thanasi tracks the flow of black-market weapons through Balkan ports to Middle Eastern war zones and countries under arms embargoes. From his family’s home in Amsterdam, 19-year-old Thomas van Linge creates detailed, highly accurate maps of the positions of ISIS and other rebel groups in Syria and Iraq. (He also keeps an eye on Hezbollah and Nigeria’s Boko Haram militants.) Using geolocated social-media posts, Russian blogger Ruslan Leviev revealed that his country’s “selfie soldiers” were inside Syria well before the Kremlin announced it was sending troops to help the Assad regime. Christoph Koetll, who investigates conflict zones for Amnesty International, recently traced a rifle that had appeared for a split second in a video, using it to expose the aftermath of 600 extrajudicial executions apparently conducted by the Nigerian military and its state-sponsored militia.

The debris of the Malaysia Airlines flight shot down over eastern Ukraine on July 17, 2014. Dmitry Lovetsky/AP

Higgins is self-taught, and he attributes his skill at open-source investigation to his obsessive and compulsive mind—and hours playing online games. He started analyzing the weapons used in the Syrian conflict as a hobby, but soon started to break major stories. He was among the first to expose the Assad regime’s use of barrel bombs and chemical weapons, and he uncovered a secret arms trail that brought weapons from Croatia to Syrian jihadist rebels. He reported on civilian casualties caused by US missile attacks on Al Qaeda’s Khorasan group. (The Pentagon issued a denial.) After Higgins identified where ISIS beheaded American journalist James Foley in 2014, “you had all these online jihadists telling each other not to film stuff and to be careful about what you have in the background,” he recalls. “It was the first time I’d seen the Islamic State react that way.”

“You had all these online jihadists telling each other not to film stuff and to be careful about what you have in the background,” Higgins recalls. “It was the first time I’d seen the Islamic State react that way.”

Most recently, his revelations have fed the international criminal investigation into the downing of MH17, the Malaysia Airlines flight shot down over eastern Ukraine in the summer of 2014, killing all 298 people on board. The Kremlin had placed the blame on Ukraine, supplying a satellite image of what it alleged was a fighter jet approaching the airliner. Bellingcat exposed the photo as a sloppy collage. As more details emerged, Bellingcat systematically discredited Moscow’s version of events, showing not only that Russia had supplied the missile that took down the airliner, but also that the missile launcher in question was issued to Russia’s 53rd Anti-Aircraft Missile Brigade. Bellingcat turned over more information to Dutch investigators, including social-media profiles of members of the Russian missile unit who, Higgins notes, “mysteriously deleted all their posts.” In October, the Dutch Safety Board released a report alleging that the airliner had been hit by a Russian-made Buk missile that only could have been launched from an area held by pro-Russian separatists—just as Bellingcat had reported. Dutch police are thought to be preparing criminal charges against the missile attack’s suspected perpetrators. (On February 24, Bellingcat published an updated investigation, with details previously only shared with international investigators.)

Even as Higgins and his peers have proved the power of technology to expose war crimes, social media has made it easier to spread falsified information. With this in mind, there’s talk of a team of analysts, journalists, human rights activists, and perhaps some Silicon Valley titans working on what one source describes as “an open-source version of the Associated Press that focuses on decrypting lies.”

“That’s the power of the Internet,” says Czuperski. “People providing information and engaging with it. It makes our own governments more accountable, but foremost it gives the free world the opportunity to hold regimes accountable in a way that has never been done before.”

Will it work? “Some nations might think twice about trying to get away with something when they know it’s going to be blown out of the water,” Skinner says. And as Higgins has shown, when conflicts can be investigated from half a world away, the fog of war may be lifting.