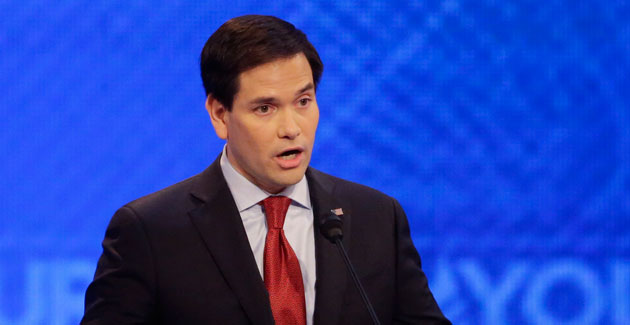 Rubio at the GOP debate at St. Anselm CollegeDavid Goldman/AP

Not long after the conclusion of the GOP debate in New Hampshire, Michael Steele, a former chair of the Republican Party, was sitting in a booth at JD’s Tavern in Manchester, a favorite watering hole for journalists, pundits, and political tourists, and he was shaking his head. A reporter had told him that she had just heard from Marco Rubio’s camp. The once-surging presidential candidate had two hours earlier become the goat of the night, after he robotically repeated talking points in response to Chris Christie’s fierce attack that the junior senator from Florida was nothing but an inexperienced empty-suit legislator whose best asset was his ability to deliver memorized rhetorical flourishes—that is, to robotically repeat talking points.

Responding to Christie—and proving his assailant’s point—Rubio had multiple times recited a prepared line in which he slammed President Barack Obama for purposefully ruining the United States. This was Rubio’s emperor-has-no-clothes moment. And after the debate, he dared not enter the spin room to explain his broken-record impersonation. But his advisers, up until now one of the most savvy teams on the GOP side, quickly developed their post-debate spin. They were telling reporters that the debate demonstrated that Rubio was so committed to criticizing Obama that he would seize every opportunity to do so. At the bar, when Steele heard this, he laughed sadly. “No, no, no,” he said. “It was a major blunder.”

That’s how most of the professionals saw it. Even on Fox News, which had been Rubio-friendly turf, his screwup was the headline of the night. Like a wolf, Christie had pounced and ripped apart Rubio’s soft underbelly. (Christie had been practicing this assault earlier in the day.) And the politerati watched in amazement at Rubio’s implosion (that word seemed to be the consensus description in the swanky Google-sponsored media filing center at the debate). Now there’s no telling how New Hampshire voters—especially those still-undecided, late-breaking voters—will respond to this. They’re a volatile and fickle bunch, as likely to be swayed by a non-controversial moment (say Ted Cruz speaking about his half sister’s death from an overdose) as an exchange deemed uber-significant by the press crowd. Yet it’s hard within the media bubble not to see Rubio’s brain freeze as a helluva plot development.

Candidates do rise and fall as media creatures. Rubio placed third in Iowa and became the story of the week, as political journalists focused on him as the new breakout candidate. At a town hall meeting in Derry on Friday, his supporters marveled at the large number of camera crews trailing the Florida senator. The presence of this horde gave the Rubio backers the feeling that their man Marco did indeed have momentum. And in the political-media echo chamber, this has a self-reinforcing aspect: candidate dubbed hot by the media receives more media attention and the chance to become hotter. The narrative was Rubio gaining an edge in the so-called establishment lane of the race and being in the position to pull away from Jeb Bush, John Kasich, and Chris Christie. (During that appearance, Rubio recited his well-polished stump speech, which included the riff about Obama that he would repeat four times at the debate.)

Post “Marcobot,” the media tale is quite different. Is Rubio ready? Is there any there there? Can this guy think on his feet? Does he have the smarts to be president? He can expect the press to keep a watchful eye on his words and note his penchant for repeating a series of well-honed lines. (Which is, after all, what a stump speech is.) What this means is that Rubio’s best asset could turn into a liability. Of all the candidates, he is the smoothest. His team has crafted powerful messages that cast him as a forward-looking, new-generation leader (with, of course, all the obligatory attacks on the president and Hillary Clinton). And Rubio is a talented performer who can utter these memorized passages—which contain few original policy details—with tremendous feeling, eloquence, and a dash of good humor. He tells his poignant son-of-an-immigrant story well. The man can look as if he is gazing right into the future. This is what got him to the point where establishment Republicans were wondering if he would be the one to save them from Donald Trump and Ted Cruz.

Poof. That magic is gone. Or at least we now see the strings. And after the debate, Rubio is going to have to show he’s not just a pretty face who can hit a rhetorical mark. (At the Derry event, a 48-year-old local woman, who was undecided, told me, “I’d do him.” And she was wearing a wedding ring.) In Washington, Rubio has been privately derided by senators and staff as a show-horse and a lightweight. Christie’s assault puts this version of Rubio into the spotlight.

And there’s this. A few days ago, the Rubio campaign was telling reporters—not for quotation—that after the Iowa caucuses a trickle of money from Jeb Bush funders had started to flow into its coffers and that these funders were saying, “Let’s talk after New Hampshire.” But unless Rubio overcomes this screwup and places a strong second, it’s a good bet those Bush funders and other GOP moneybags will stick to a wait-and-see stance.

The morning after Rubio’s malfunction, at a pancake breakfast in Londonderry—where Democrat operatives appeared in cardboard outfits depicting the candidate as “Marco Roboto”—Rubio offered his much-anticipated response to this stumble: “After last night’s debate, everyone is saying, ‘Oh, you repeated yourself.’ Well I’m going to be saying it again.” Meaning that he would persist in proclaiming that Obama knows what he’s doing as he supposedly wrecks America. And on ABC News, Rubio said, uh, the same thing: “It’s what I believe and it’s what I’m going to continue to say, because it happens to be one of the main reasons why I am running.”

The last time Rubio messed up big-time—when he awkwardly grabbed a bottle of water and took a swig while delivering the official GOP reply to Obama’s State of the Union address—he chose to respond with humor and made a series jokes about that awkward incident. This time, he’s going with defiance. That may be an indication that his advisers believe this mess is damn serious and cannot be joked away. No doubt, this hang-tough approach will work fine with his pre-existing fans. But can Robo-Rubio sell it to a wider audience?

Children out there, this is a fable. I don’t know what animal Marco Rubio most resembles in this regard. Maybe a kangaroo? But here’s a story in which a man’s strength has also turned out (for this news cycle) to be a weakness. What happens next depends on whether he has other skills in his pouch.