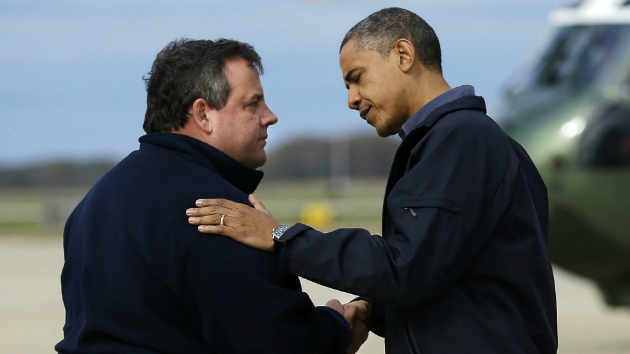 In a Bedford, New Hampshire, warehouse filled with several hundred supporters, Chris Christie on Saturday morning said that four years ago he was asked to run for president—begged to run for president—by associates, politicos, and funders. But, he recounted, he resisted these calls. Why? “I knew, in my heart, I was not ready to run for president,” Christie told the crowd. But the Christie boosters back then persisted. Don’t worry if you don’t have the experience yet, he said they told him, just get into the White House and then figure out what to do. But Christie said to his supporters that was not his way: “The politically popular thing to do when you see an opening is to run for it.” But he hung tough and told all these acolytes that he did not yet have the chops to be commander in chief. Then came his big break: Superstorm Sandy.

In a speech mainly focused on dismissing his rivals as untested and not prepared to be president—he called Trump an “entertainer-in-chief” and mocked one-term senators, such as Marco Rubio, for knowing how to haggle over amendments but not how to manage real-life crises—Christie repeatedly proclaimed that he was a true leader and that he knew he could handle whatever the world throws his way. That’s why he would be a great commander in chief. And the reason he realized this now—after his moment of doubt four years ago—is that, as governor, he guided New Jersey through that awful storm.

Surrounded by Republican governors Larry Hogan of Maryland and Charlie Baker of Massachusetts, Christie described in vivid detail how he had managed his state’s response to Hurricane Sandy. “I will tell you one thing, there’s no one on that stage, not one of us that faced the kind of crisis that New Jersey faced in October of 2012,” Christie bragged. “This was not a summer hurricane… And the next day it was cold and it got colder!”

Over and over, Christie discounted the legislative work of senators. Do they, he asked, get calls at 4:00 am about crises and disasters? No, he answered. No one, he pointed out, ever calls a senator in the middle of the night to say, “Your bill has not come out of the subcommittee.” And do these senators have to make tough calls, at a moment’s notice, on which lives depend? No way. They do not know the loneliness of being the chief executive. “After they give you that briefing when you’re governor,” Christie said, “the next morning here’s what happens…the table gets quiet and they all look at you and they say, ‘What do we do now governor?’ There’s no way a roll call vote in the United States Senate prepares you to deal with that.”

Christie repeatedly poked at Rubio in this fashion. At one point, he compared the Senate to a grade school. In the Senate, he said with a smirk, a legislator is told when to show up, what desk to sit at, what questions to review before a test (that is, a hearing), and when to take a recess. With much scorn, Christie noted that the GOP nomination should not go “to someone who memorizes a good 60-second answer.” He was referring to Marco Rubio. The not-too-subtle message: Trump is a clown, Rubio is a immature poser, and neither should be put in charge of the United States government and its military. His rivals are pretenders, and Christie deserves this job because he’s been a strong governor who passed the Sandy test.

There is something curious about Christie’s Sandy-heavy argument. After all, it was President Barack Obama—a one-term senator prior to the presidency—who helped Christie cope with the ravages of Sandy. So much so that Christie at one point gave Obama that now famous bear hug. In fact in 2013, Christie told the Bergen Record this version of what it was like sitting around the table after Sandy struck:

That first call came, Christie recalled, as he and his team were struggling to come to terms with the depth of the destruction as it became evident in television images showing houses in the middle of Route 35 and scenes of the ocean meeting the bay in Mantoloking.

The president asked if he could visit the state.

“If you understand the emotional condition we were all in, all of us in this administration sitting around that table watching that, you’d understand that very soon thereafter, probably two or three hours after that, he called for the first time,” Christie said. “I’m like, man, ‘Can I come?’ Tell me where and when and I’ll be there. I need your help.”

Yes, once upon a time, Christie was quite appreciative of that former one-term senator in the White House. Seems like that fellow did a pretty good job. Still, in the home stretch before New Hampshire votes, Christie was pushing one big theme: he’s a leader and his Sandy experience qualifies him to command the men and women of the armed services. Without that storm, who knows whether Christie would have become the well-prepped leader he is today and realized that he is indeed presidential material?

For all the talk about coping with that calamity, Christie ended his speech with an odd reference to natural disasters. He vowed to “burn Washington, DC, down, because it deserves it.” He then added that after demolishing the nation’s capital, he would be “the person to rebuild it.” Perhaps he learned how to do that, too, thanks to Sandy.