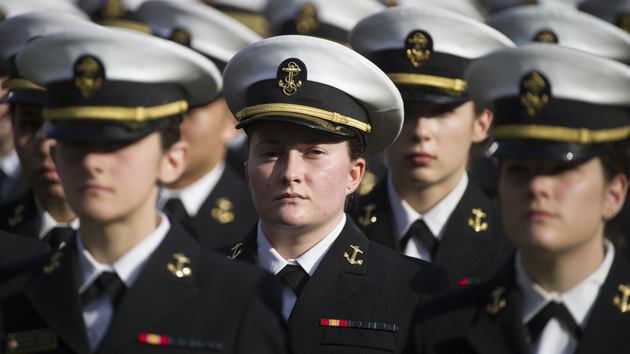 It’s been a big few months for women in the armed forces. In December, Defense Secretary Ash Carter announced that for the first time, all military jobs would be open to women—including elite combat positions. On February 4, following the advice of top officials in the Army and Marine Corps, House Republicans introduced legislation that would require women to register for the draft.

So, how prepared is the Department of Veterans Affairs for the influx of female veterans? When it comes to women’s health care, apparently not very ready. If you’re among the growing population of female veterans, you might have trouble finding a gynecologist, getting a mammogram, or preparing to have a baby in many of the country’s VA medical facilities. Check out the statistics: 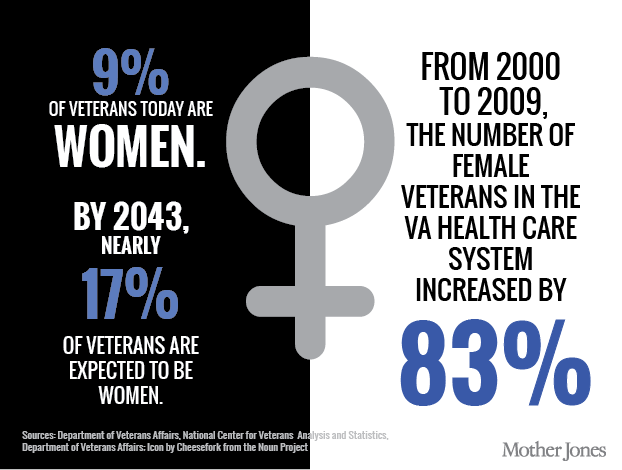 The lack of health services for female veterans is partly due to low patient numbers, according to Lory Manning, a retired Navy captain who formerly worked on the VA secretary’s advisory committee for women veterans. The veteran population is still about 90 percent male. Some VA facilities don’t have enough female patients to get federal certification for mammography services, so women are referred elsewhere. In other cases, facilities only have part-time gynecologists who visit a few times a week, or they refer women to gynecology services through community care providers.

And many VA hospitals were built several decades ago with male patients in mind, so there aren’t enough private rooms for women. The situation is somewhat better for military women before they become veterans: While they’re still active duty, they get health insurance through the Defense Department, whose medical system offers more women-specific treatment because it also cares for military spouses and family members. But the VA’s medical system doesn’t treat family members. Sometimes, Manning adds, “a woman veteran goes to the hospital and is asked whose wife she is or what she’s doing there.”

“I remember my nurse was taking my vitals,” says De’Cha LaVeau, a 38-year-old Navy veteran. “She leaned over and whispers to me, ‘I’m so sorry for having to ask you this, but when was your last menstrual cycle?’ And I remember thinking to myself, why are you sorry for asking me that? Why are you making me feel embarrassed to tell you what I’m supposed to tell my health care provider?”

Sometimes “a woman veteran goes to the hospital and is asked whose wife she is or what she’s doing there.”

Female vets also deal with spotty coverage when it comes to family planning. In 2013, President Barack Obama signed a law giving active-duty female service women and military family members the right to access abortion with their insurance in cases of rape or incest. But female veterans still don’t have this right.

The VA has made some progress in recent years, including by establishing women’s health centers at its medical facilities. Dr. Patricia Hayes, a chief consultant for the VA’s women’s health services, says three-quarters of female patients have been paired with primary care providers who have been trained by the VA in women’s health and can give pap smears or prescribe birth control.

And while the VA doesn’t provide maternity care itself, it covers the cost of this treatment at outside care centers. In 2012, the Department of Veterans Affairs reported that 87 percent of female veteran patients received breast cancer screenings and 92 percent received cervical cancer screenings—a higher percentage in both cases than women patients in the commercial health care system. But the department also acknowledged that, compared with their male counterparts, fewer women veterans received immunizations or screenings for colorectal cancer and depression, while more of them were prescribed inappropriate medications. 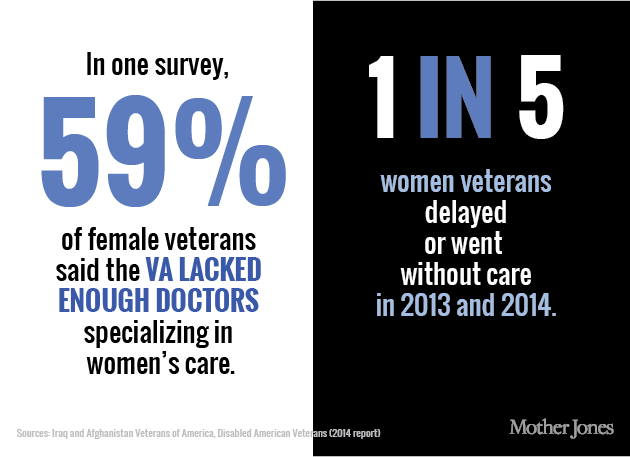 On Tuesday, the House passed a bill that would require the VA to examine whether its programs for mental health and suicide prevention are meeting the needs of female veterans. LaVeau, who has PTSD from military sexual trauma, says she has struggled to get timely appointments with counselors. The VA is known for having long wait lists. “It’s rough,” she says, crying over the phone. “You call to get an appointment when you’re having a bad day—you’re thinking you’re going to get in within a couple of weeks. And it took call after call after call to get a letter saying you have an appointment six months later.”

Update (2/12/16): A VA spokeswoman contacted us to inform us that since 2011, an additional 21 VA hospitals have added on-site digital mammography. (The 2011 statistic we cite refers to the percentage of overall medical facilities, not just hospitals, providing mammography services). “Consistent with the private sector primary care offices,” she wrote, “mammography services are not available at our smaller community based outpatient clinics.” She added that 133 of 150 VA hospitals have gynecologists on staff. (Again, the 2014 statistic we cite considers all medical facilities.)

Correction: An earlier version of this article mischaracterized the likelihood of female veterans committing suicide.