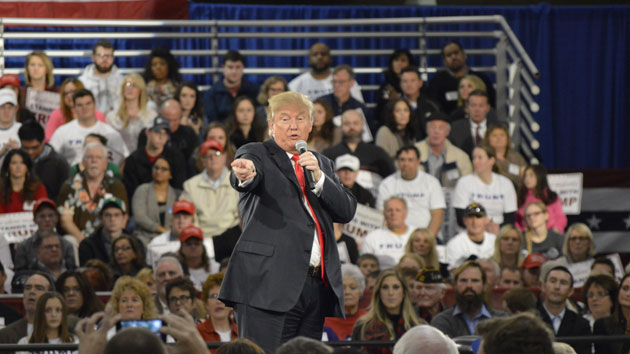 Like it or not, Donald Trump is in the driver’s seat for the Republican presidential nomination.

The networks called the South Carolina primary for Trump shortly after polls closed on Saturday, with Sens. Ted Cruz of Texas and Marco Rubio of Florida locked in a battle for second place. Over the last week of the campaign, Trump’s opponents worked hard to spin anything less than an overwhelming victory as a disappointing showing for the billionaire real estate mogul, but make no mistake about it: Trump’s win is a big deal. He has now finished second, first, and first in Iowa, New Hampshire, and South Carolina, three states that have very little in common. He has won the latter two by overwhelming pluralities. And he has history on his side: Only one candidate has ever lost South Carolina and won the nomination, and that candidate, Mitt Romney, finished in second in 2012. If his name were anything other than “Donald Trump,” the party’s leaders would be penciling him in for the final speaking spot at their convention in Cleveland.

Trump used South Carolina as a backdrop for some of his most overheated pronouncements. He promoted his proposal to ban Muslims from entering the United States while speaking aboard a decommissioned aircraft carrier in Charleston Harbor. He called Pope Francis “disgraceful” for questioning his proposal to build a wall on the Mexican border. And in his final event of the primary campaign on Friday night, he told the audience an apocryphal story about General John Pershing executing 49 Muslims with bullets coated in pig blood. His biggest argument against Cruz’s candidacy was that the senator was unnecessarily squeamish about torture. Shortly after polls opened on Saturday, Trump tweeted that President Barack Obama would likely have attended Antonin Scalia’s funeral if it had been held at a mosque. Opponents, notably former Florida Gov. Jeb Bush, sought to cast Trump as boorish and unpresidential. They misunderstood the race.

Trump didn’t win in spite of being a boor, a bigot, and an analog internet troll; he won because he was proudly all those things. For all the diversions (who picks a fight with the pope, anyway?), he articulated a remarkably clear theory of politics: Other people are screwing you over, and I’m going to stop it. “He’s got balls,” Julia Coates, a longtime Trump fan, told me as we waited for the real estate magnate to take the stage in North Charleston. “He’s got big ones. And that’s what we need. I’m tired of all this shit going on.” It’s the kind of approach that plays poorly among the genteel Southerners who crowd into Low Country town halls in boat shoes and Nantucket red. But he recognized the electorate as something greater—and angrier. If you hadn’t voted in decades, Trump was your guy. If you felt betrayed by the people you had voted for, Trump was also your guy.

If Trump was a winner, then everyone else is (to use his term of choice) a loser—including Rubio, who finished third in Iowa and a disappointing fifth in New Hampshire. Now you can add the South to the list of regions that have been less than receptive to his pitch. It’s not because he didn’t make his message clear. Over the last week, he cast himself as the anti-Trump, a fresh-faced Cuban American who could lead the party into the future. He toured the state with rising star Rep. Trey Gowdy; the state’s African America senator, Tim Scott; and its Indian American governor, Nikki Haley, who joked that the quartet looked like a “Benetton commercial.” Rubio bet the house on the idea that South Carolina was ready for the future and mentioned the Republican front-runner only in passing during his speeches, and never by name. Trump stuck with the past; he went all-in on white identity politics and, like Newt Gingrich and George W. Bush before him, came through unscathed—two divorces be damned.

In actual terms, the biggest loser was Bush, whose campaign is on life support after finishing far behind in a state that helped make his brother president 16 years ago. In a last-gasp effort at upping his numbers in South Carolina, he brought George W.—who was kept at arm’s length for most of the campaign—to North Charleston for a megarally where they chest-bumped backstage. And he blanketed the radio airwaves with an endorsement from the ex-president. Jeb pushed hard to position himself as a commander in chief in a state with one of the highest percentages of military families in the nation.

But even his supporters seemed to recognize the end was near. At a town hall in Summerville, in an open-air pavilion overlooking a golf course (Bush never tried too hard to shake the “country club” label), one questioner after another all but called him a wimp. As the event wrapped up, a voter told the younger Bush that he was a big fan of Dubya but questioned whether Jeb had the toughness for the job. “Can you be a sonofabitch?” he asked. Jeb didn’t say yes.

From here, the Republican field moves on to Nevada and then Super Tuesday, on March 1. Thanks to the efforts of a Southern bloc, that historic bellwether will be loaded up with states that look about as friendly to Trump as South Carolina did. (Not that he needs to drop his g’s to win votes—he cleaned up in New Hampshire, too.) There’s also a lot of time for him to screw it up, although short of lighting an American flag on fire in Times Square, it’s not clear what that would even look like. The more likely scenario is that his opponents and their backers might finally spend real money attacking him on the airways—just $9 million of the $215 million spent by conservative super-PACs this cycle has been on anti-Trump ads. But don’t let Trump’s army of Republican critics say South Carolina doesn’t matter. They’ve been saying for years and years that it does. And they’re absolutely right.