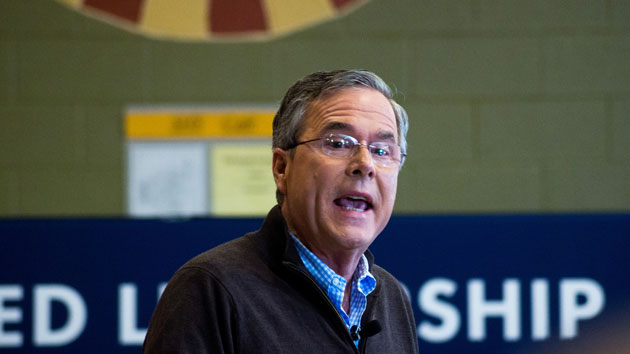 Jeb Bush can’t escape Donald Trump, and with three days to go before South Carolina Republicans cast their votes in the first Southern primary, the frustration is starting to show. As he finished his stump speech at a golf course in Summerville, the former Florida governor made an uncharacteristically sarcastic appeal to conservative voters.

“I know how to beat Hillary Clinton, I know how to win, and I ask for your support on Saturday,” Bush said. “It’s all been decided, apparently—the pundits have made it all, we don’t have to go vote, I guess. I should stop campaigning maybe, huh?”

“It’s all been decided,” Bush continued.

When it came time for questions, the subject turned to Trump—that is, Trump’s never-ending thumping of Bush. A Bush supporter took the microphone to say he’d been looking forward to hearing Bush speak “without interruption.” Bush laughed. But the man continued: “I’ve known for a long time you are the best-qualified person to be president of the United States, and I thank your for that, but I’m afraid that your message does not resonate to the national community.”

The fellow suggested that was because Bush was overshadowed and outmaneuvered by Trump. “I was wondering if, because of your civility, if you could raise the bar in the next [debate] and try to be beyond the bullying? Because I think that’s who you are, and I think they try to knock you off center, and it appears you do get knocked off center, like anyone would because of the insults to your family.” He asked if Bush could demonstrate that he wouldn’t be bullied—by politicians or foreign leaders—if elected president.

“First of all, I don’t feel like I’m shaken up by the bully,” Bush answered. “In fact, I’m the only guy going after the guy, because he’s hijacking the party.” Bush defended his debate posture as a mix of “loaf of bread” policy proposals and hard-nosed politics. Referring to his chief nemesis, he added, “Donald Trump’s not a conservative, he’s not a steady hand—for sure—and he’s not a servant. It’s all about him. And I’m the only guy going after him. I don’t feel that he’s intimidating. He’s a bully! Punch him back in the nose!”

This wasn’t convincing for everyone there. A few minutes later, another voter asked Bush about his lack of fight. “I think the campaign has been co-opted by the P.T. Barnum of our time,” the man said. “And I think he is getting you off your message—your good message, and all the items that you shared with us today. And I think I would encourage you to emphasize those things more.”

“I do!” Bush said, a bit too defensively. “This is called ‘campaigning’ right now.”

“No, I mean, sir, on the more national level,” the man said. “To the extent that you can. I know when you get into the debates it’s a free-for-all sometimes. But I would encourage you to go not just on your record but on your plans.”

The last questioner told Bush, “I love your brother, George W. Bush.” And what he liked about that other Bush was his ability to play hardball when necessary. “Excuse me for saying in vernacular terms,” this voter asked, but could Jeb Bush be a “son of a bitch”?

“Is that a question?” Bush responded. “Will I be an S.O.B., I think he said? I will be tough, I will be resolute, I will be firm, I will be clear, I will be determined—that’s what leaders are. I won’t cut and run. That’s—I mean look, I’m following all this stuff like everyone else and I will tell you there are some politicians that are gifted at weaving through everything for their own ambitions. They’re looking at the next step. They’re moving to the next place. They’re always trying to figure it out. That’s not me. I run to the crisis.” Was that a yes? Or a no?