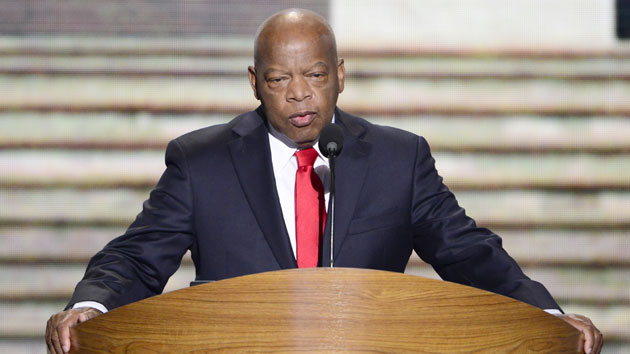 When a reporter asked Lewis to comment on Sanders’ involvement in the movement—Sanders as a college student at the University of Chicago was active in civil rights work—the congressman brusquely interrupted him. “Well, to be very frank, I’m going to cut you off, but I never saw him, I never met him,” Lewis said. “I’m a chairman of the Student Nonviolent Coordinating Committee for three years, from 1963 to 1966. I was involved in the sit-ins, the freedom rides, the March on Washington, the march from Selma to Montgomery, and directed their voter education project for six years. But I met Hillary Clinton. I met President Clinton.”

The preeminent civil rights hero’s pooh-poohing of Sanders came at a press conference where the Congressional Black Caucus PAC announced its endorsement of Hillary Clinton for president. The PAC is somewhat separate from the Congressional Black Caucus (CBC), which is a group of 46 African American members of the House. (All its members are Democratic but one.) But the PAC is chaired by Rep. Gregory Meeks (D-N.Y.), a CBC member, and its 20-person board is made up of seven CBC members and several lobbyists, lawyers, and consultants. Some media accounts are depicting this endorsement as the action of the CBC. But Rep. Keith Ellison, a Minnesota Democrat and a CBC member, sent out an accusatory tweet shortly before the endorsement, complaining, “Cong’l Black Caucus (CBC) has NOT endorsed in presidential. Separate CBCPAC endorsed withOUT input from CBC membership, including me.” Ellison is one of two House members who have officially backed Sanders.

The CBC PAC endorsement of Clinton was hosted at the Capitol Hill headquarters of the Democratic National Committee, which raises questions about the DNC’s supposed impartiality in the Clinton-Sanders race. An official at the Democratic National Committee says that the party had nothing to do with the CBC PAC’s event, which was held at DNC headquarters on Capitol Hill. “Members of Congress who are dues paying members of the [Democratic Congressional Campaign Committee] can reserve the space,” he told Mother Jones in an email.

As Mother Jones reported previously, Sanders was involved in the campus chapter of the Congress on Racial Equality (CORE), another civil rights group:

During his junior year, Sanders, by then president of the university’s CORE chapter, led a picket of a Howard Johnson’s restaurant in Chicago, part of a coordinated nationwide protest against the motel and restaurant chain’s racially discriminatory policies. Sanders eventually resigned his post at CORE, citing a heavy workload, and took some time off from school.

The CBC PAC endorsement comes at a key time in the Democratic primary contest, as Clinton and Sanders head toward the next primary in South Carolina on February 27. The Democratic electorate in that state has a high percentage of African Americans, and a crucial question for both campaigns is whether Sanders can find support with black voters or whether Clinton will maintain her commanding lead in the polls among this group. Political observers have pointed to South Carolina as the state where Clinton has a shot at arresting Sanders’ post-New Hampshire momentum due to her standing with black voters. With the fight on for black voters, endorsements from the African American community are important for each campaign—and Lewis’ comments won’t help Sanders.