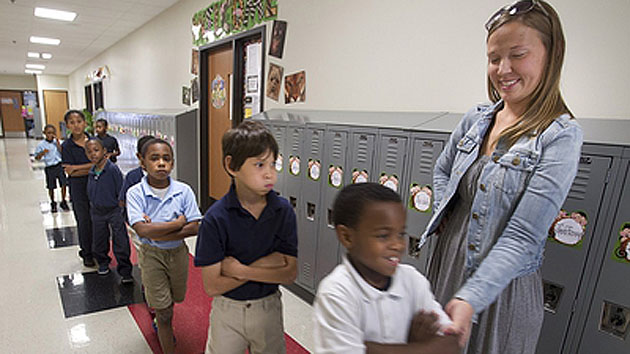 Audrey Pribnow, with Teach for America, leads her class at University Academy in Kansas City, Missouri. Photo by Tammy Ljungblad/TNS/ZUMAPRESS.com

Last weekend, Teach for America, the nonprofit that places freshly minted college graduates in schools to teach for two years, held a national summit in Washington, DC, to celebrate its 25th anniversary. The event featured a number of the organization’s most celebrated alumni who helped build today’s education reform movement—known for its passion for testing, ranking of teachers, and deep support of charter schools. Michelle Rhee, the former DC schools chancellor was there; so was Eva Moskowitz, the head of the largest chain of charter schools in New York City, and Michael Johnson, the Colorado senator who helped pass one of the early laws mandating the use of test scores in teachers’ evaluations.

As soon as the summit began, Teach for America’s zealous supporters and fierce critics took to Twitter. “Please tell me that somebody is protesting this awful, anti-public education conference,” writer and author, Nikhil Goyal, tweeted. Joel Klein, a former superintendent of New York schools who now works for Rupert Murdoch’s News Corporation, tweeted, “[Teach for America] has produced more great leaders fighting for edu[cational] equity than any other.” Teach for America alum Gary Rubenstein launched a #FactCheckTFA25 hashtag that he said would deflate many of the organizations’ exaggerations about its successes.

It’s hard to think of an education reform organization today that is more well-known and more divisive than Teach for America. Many advocates say Teach for America is on the front lines of fighting educational inequity and racism by sending top talent to the most struggling classrooms; opponents charge that Teach for America sends poorly trained teachers into schools with high rates of kids in poverty that need qualified teachers the most. Opponents also argue the organization’s elite recruits often displace veteran black and Latino teachers.

In the last three years, a stream of articles and open letters from Teach for America alums have fanned the flames. In 2013, Olivia Blanchard published an essay in The Atlantic, “I Quit Teach for America,” in which she declared that the five-week summer crash course that she—a typical Teach for America recruit—took before being placed in a school didn’t prepare her to fix the wrongs in the most challenging classrooms. That same year, Gary Rubenstein, a former recruiter for Teach for America, wrote an open letter to Wendy Kopp, the founder of the nonprofit, stating that the previous 2010 summit made him ashamed of the organization: “[It] was disappointing to me that the theme of the summit was generally about how charter schools were THE answer and how ‘bad’ teachers and unions are THE problem. It felt like TFA was trying to convey the idea that ‘We figured it out. Now we just have to scale up,’ despite the fact that nobody has really conclusively figured ‘it’ out.”

A number of studies conducted over the past 10 years have suggested that Teach for America educators have been no more effective raising children’s test scores than teachers from all other avenues (though studies show Teach for America educators, compared with other teachers, have increased kids’ math scores slightly more than their reading and writing scores, according to journalist Dana Goldstein). Studies have also shown that there can be negative impacts from high teacher turnover, and others have called into question the impact of “no excuses” pedagogical approaches that can be found in charter schools.

Such findings—and the drop in the numbers of new applicants for Teach for America—have sparked an unprecedented debate within the organization and have led the organization to create a slew of new initiatives. Teach for American now has pilot programs to help teachers stay in the profession longer and programs to expand training time beyond the five-week summer courses. There is a new educational justice training program that draws on scholarship by African American scholars, including Gloria Ladson-Billings and Lisa Delpit, to help corps members create more culturally relevant classrooms. For the first time, Teach for America alum and critic Amber H. Kim facilitated a panel at the DC summit for the organization’s opponents titled, “Critics, Not Haters.” 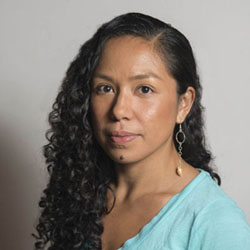 Honolulu-based English teacher and Teach for America alum Christina Torres told me that the nonprofit is now far too large to view it as a one-dimensional organization. The organization represents a huge variety of beliefs. Today there are about 11,000 Teach for America educators who are still teaching in the classroom. And the new corps members are more diverse in class and race: Close to half of the 2015 corps are people of color, and 47 percent of them come from low-income or working-class backgrounds.

Torres, who refers to herself as “Mexipina” (her father is Mexican and her mother is Filipino), now has over four years of teaching under her belt. For the past two years, she has worked in a progressive, integrated charter school serving Asian American, Samoan, and Native Hawaiian students and kids from Guam. Last weekend, in between Teach for America panels, I asked her about this year’s summit.

Mother Jones: Why did you join Teach for America?

Christina Torres: I chose it partially because when they recruited me, they touched on some aspects of race and access to education that had affected my own family. My family had worked really hard to ensure my brother and I had received a great public education. Many other schools that kids like me went to didn’t have every AP class offered, free SAT prep, or the hundreds of little privileges I received. This lack of quality and parity was heartbreaking. Teach for America also made it easier to get into the classroom.

MJ: Why did you choose a charter school now?

CT: They offered the job! But also the school has an incredibly strong, positive culture and I work with amazing teachers. I also believed in their charter’s purpose, which is to build a school that acts as a laboratory for innovative curriculum that then gets scaled to the state level.

I have a lot of qualms about the charter movement from what I experienced while I worked in charter schools in Los Angeles. I think they often don’t add anything to the community. However, this charter serves a function I believe in.

MJ: What criticisms—that Teach for America is elitist? Or disrespectful of veteran educators—do you think are deserved?

CT: The criticism that TFA is white, elitist, focused on testing, and short of pedagogical seriousness could also be a applied to a lot of schools and traditional teacher prep programs. Education and teacher training often inherently value white culture. That’s not an excuse, but it seems like the focus on TFA alone minimizes the larger issue that education as a system needs to be inherently rethought. I think TFA is beginning to own its part in that, though, and we need to not just pay lip service to it.

MJ: How do you feel when you hear that Teach for America placed teachers in a city like Seattle in 2010, when there were no teacher shortages or Chicago in 2013, while veteran teachers, often educators of color, were laid off?

CT: Frustrated. It makes me feel angry and sad. Also, it makes it harder to do the work in places with real shortages, such as Hawaii or the [Native American] reservations.

MJ: What makes you feel like TFA is evolving?

CT: Just the fact that we’re discussing race and privilege—including panels at the summit this year for white folks to begin dismantling their own systems—in such a frank way is completely new. Also, the explicit push for people to teach beyond two years was pretty shocking.

CT: The organization is still deeply entrenched with charters in a way that makes me feel very uncomfortable. The amount of space and funding we give to alumni startups instead of investing that money in already existing structures or entrepreneurs in communities we serve also feels strange. The amount of celebrity we apply to some “higher-up” folks like Wendy Kopp is also something I want to move away from.

MJ: Gary Rubenstein wrote in his blog that most of the summit’s panels were heavily “reformer.” Did you think so?

CT: I think the panels were split between the two sides of TFA: Some were “rah-rah TFA,” but others were all about the work. All the panels I went to were about the empowerment of communities and students of color—culturally responsive pedagogy, student activism, native student education. I felt like I got diverse viewpoints and I was pushed. Characterizing the summit as “mostly” reformer focused seems strong. I think the panels reflected varying interests and beliefs.

MJ: Did the conference address issues or race in a meaningful way?

CT: The TFA Native Alliance Initiative panel focusing on NACA [Native American Community Academy] charter schools was huge in importance. NACA is an example of what nontraditional schooling should be: a space for communities to create safe, culturally relevant, and innovative education that needs to be protected or cultivated.

But by far, the student activism panel was the strongest part of the summit. The students themselves were given the microphone without any scripts or agendas so they could share their thoughts, beliefs, and stories. Seeing students challenge us as educators was huge to both validate and challenge my own beliefs.