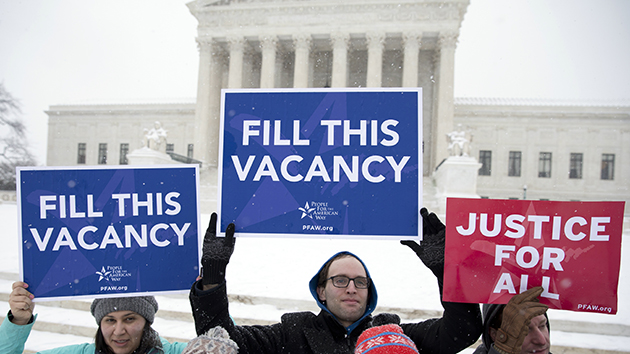 The death of Justice Antonin Scalia came at an inopportune moment for conservatives, all but guaranteeing that the liberal side will prevail on a number of hot-button cases before the Supreme Court right now. But some conservatives are fretting that the timing might be far more dangerous than that, allowing President Barack Obama to bypass the Republican-controlled Senate and make a recess appointment to fill Scalia’s seat.

“He could appoint [Vice President Joe] Biden tonight if he wanted to,” a senior GOP Senate aide told the Washington Examiner over the weekend.

Although the president is extremely unlikely to make a recess appointment in the next few days (a White House spokesman even ruled out the possibility on Sunday), the hand-wringers on the right do have a point. Between now and 3 p.m. EST on Monday, February 22, Obama could fill Scalia’s seat with a recess appointment.

In 2014, the court held in NLRB v. Noel Canning that the president could fill any vacancy during a recess of at least 10 days—but left it up to the Senate to decide when it was in recess. This gave the Senate the power to block essentially all recess appointments by refusing to take a recess. (The Senate could perform a very limited amount of activity while most members are not in Washington, a technical workaround in order to avoid a recess.)

“They are not holding pro-forma sessions,” says Victor Williams, a professor at the Columbus School of Law at Catholic University. “They are in a formal adjournment…My read is that they are out for 10 days.”

According to Williams, the appointment would last until the end of the next session of the Senate, most likely in December 2017. At that point, the seat would again become vacant, until a new justice is confirmed.

Williams says the only possible counterargument—though one he does not believe holds water—is that internal Senate rules do not include Sundays when counting days in a recess, meaning the Senate is arguably in an eight-day recess. However, the Noel Canning decision that established the 10-day minimum didn’t mention not counting Sundays or holidays.

In the Noel Canning decision, Scalia authored a concurrence in which he argued that the majority did not go nearly far enough in restricting the president’s recess appointment power. If the court had adopted Scalia’s interpretation of the Constitution, Obama would not have the ability to appoint his replacement today.