The abortion rate is declining, but that has nothing to do with the sharp increase in anti-abortion legislation over the past decade. Instead, you can give credit to effective contraception, according to a new study.

From 2008 to 2011, the abortion rate dropped 13 percent, but it did so at a similar pace as the overall decline in the national birth rate, according to the Guttmacher Institute, a reproductive rights think tank that regularly releases data on sexual and reproductive health. A new study by Guttmacher, published in the New England Journal of Medicine, states that unplanned pregnancies are occurring less frequently, but the percentage of unplanned pregnancies that end in abortion remains statistically the same. In 2008, for example, 40 percent of unplanned pregnancies ended in abortion, and in 2011, 42 percent did. But, the overall rate of unintended pregnancies dropped 18 percent between 2008 and 2011—its lowest in 30 years, according to Guttmacher. 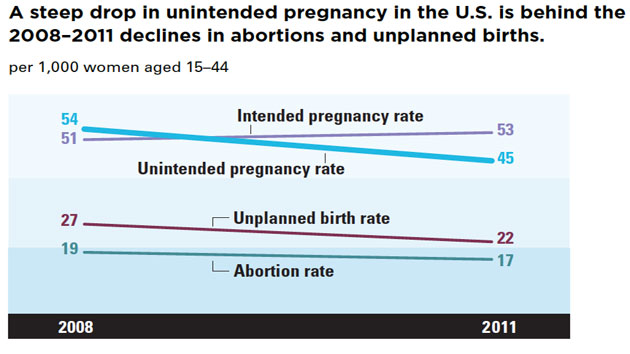 The study’s authors point out that the use of long-acting reversible contraception (or LARCs) such as IUDs or implants more than tripled between 2007 and 2012. Considered by the American College of Obstetrics and Gynecologists as the most reliable and effective form of birth control, the use of LARCs contributed to the declining unintended pregnancy rate. But poor women and women of color are still disproportionately affected; while rates are falling everywhere, they are falling less for these women, most likely because LARCs are more difficult to obtain in these communities. A different study in the New England Journal of Medicine found that rates of unintended pregnancy for poor women were two to three times the national average. IUDs are very effective, but they can be costly—according to Planned Parenthood’s website, it’s possible to pay up to $1,000 for one that lasts 12 years.

A New England Journal of Medicine study last month found that when Texas eliminated Planned Parenthood from its Medicaid public family planning program for low-income women, fewer claims were filed for contraception, and more low-income women in Texas ultimately gave birth. A number of restrictions on abortion in Texas have already shut down more than half of the state’s 42 clinics and could close 8 more.

“Supporting and expanding women’s access to family planning services not only protects their health and rights; it also reduces abortion rates,” says Joerg Dreweke, senior policy communications associate at Guttmacher. “The clear implication for policymakers who wish to see fewer abortions occur is to focus on making contraceptive care more available by increasing funding and stopping attacks on all family planning providers.”