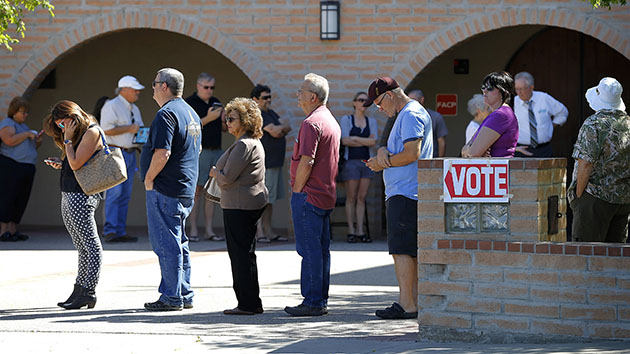 Voters wait in line to cast their ballots in Arizona's presidential primary election on Tuesday in Gilbert, Arizona.Matt York/AP

Faith Decker, a 19-year-old sophomore at Arizona State University, got off work a little early Tuesday night so she could vote in her first-ever primary. She arrived at a church in southeast Phoenix just before 7 p.m. to find “the line wrapped completely around the corner, 300 to 400 people.” After waiting in that line for more than three hours, she finally reached the check-in desk. She was told that she couldn’t vote—not because the polls had closed three hours before, but because she was registered in a different county.

Decker says that while waiting in line, she saw several people get frustrated and leave before they cast their ballots, and that the election workers seemed confused, taking a long time to process voters once they got to the table.

“It’s just kind of all a giant disappointment to everyone who usually comes out and votes in person,” she said. And as a first-time voter she was shocked “to see that it was so unorganized or disorderly.”

Decker’s long wait and disappointing outcome was shared by many voters in Maricopa County, Arizona, the state’s biggest county, with 2 million registered voters who live in Phoenix, Scottsdale, Mesa, Glendale, and other larger communities. Images of people waiting hours under the hot sun and into the night filled Twitter timelines and cable TV broadcasts. The last person to cast a ballot didn’t do so until after midnight, according to the Arizona Republic, nearly five hours after the Democratic race had already been called for Hillary Clinton, and a few hours after Donald Trump was declared as the Republican winner.

Election officials said the long lines were due, in part, to a large number of unaffiliated or independent voters trying to vote. Only those registered with one of the recognized parties were allowed to cast ballots. The state’s Republican governor, Doug Ducey, issued a statement Wednesday morning calling the situation “unacceptable” and called for allowing independents to be able to vote in presidential primaries.

What happened at polls yesterday was unacceptable. Read my full statement #AZVOTES pic.twitter.com/UqcRMCaQ70

But Arizona has a long history of problems at the ballot box. Until 2013, the Grand Canyon State was one of 16 states required to clear all changes to voting law and procedures with the US Department of Justice, under Section 5 of the Voting Rights Act, because of its history of discriminatory and racist election practices. The two-part formula used to determine which jurisdictions would fall under the Department of Justice’s review process was created nearly 50 years before in 1965 and attempted to insure that the voting-age population actually was able to vote. The first criteria was if a jurisdiction had a “test or device” that restricted the opportunity to register to vote on November 1, 1964. The state would also be scrutinized if less than half of voting-age people in a jurisdiction were registered to vote, or if less than half of the voting-age population actually did vote in the presidential election of November 1964.

The formula was ruled unconstitutional in the 2013 US Supreme Court decision Shelby County v. Holder, in which an Alabama County lawyer argued that jurisdictions covered by Section 5 “must either go hat in hand to Justice Department officialdom to seek approval, or embark on expensive litigation in a remote judicial venue.” With the court’s ruling, Arizona (and the other states and jurisdictions previously covered by so-called “pre-clearance”) could make changes to voting laws and procedures without federal oversight. But in a state that took six years to adopt a Martin Luther King Jr. holiday, is the home of controversial Maricopa County Sheriff Joe Arpaio, a Donald Trump supporter, and where SB 1070 required the police to determine a person’s immigration status when there was “reasonable suspicion” that they were in the country illegally, the difficulties in voting raised some concerns about darker motivations.

Maricopa County Recorder Helen Purcell, the woman in charge of administering the county’s elections, said in an interview with a local news reporter Tuesday night that “the voters, for getting in line” were at least partly to blame for the long lines:

On Wednesday she told the county board of supervisors that she would “do it differently” if she could do it again, and that she “takes the blame” for what went wrong. She also blamed independent and unaffiliated voters who tried to vote for slowing down the process. Maricopa County Supervisor Steve Gallardo said, “I just don’t buy that,” according to the Arizona Republic.

One reason for the long lines is the fact that the county went from 200 polling locations in 2012 to just 60 in 2016. As Republic reporter Caitlin McGlade noted Tuesday night, Maricopa County’s 60 polling locations worked out to about one for every 20,833 eligible voters, compared with one polling station serving 2,500 voters in other Arizona counties.

State Sen. Martín Quezada, (D-Phoenix), offered his own explanation for the lack of polling locations in his area on Wednesday:

Tammy Patrick, the county’s former federal elections compliance officer, is now a senior adviser of the Democracy Project at the Bipartisan Policy Center in Washington, DC, where she consults with jurisdictions around the country about voting administration best practices. She said the comparison between 200 polling stations in 2012 and 60 in 2016 is misleading because the 200 polling stations in 2012 were “precinct-specific,” while the 60 this year were so-called “voting centers,” where voters could cast ballots anywhere in the county. Jurisdictions in 33 states are moving to or already use a vote-center model, she says, which are attempts by local election officials to help voters who appear at incorrect precinct voting locations.

“This alleviates all of that,” she says. “People could go anywhere, but it also meant they had to have much larger facilities. So they had a fewer number of options on where they could get a facility large enough to be a vote center that would allow them in.”

Patrick’s job from late 2004 through the end of the Voting Rights Act coverage in 2013 was to make sure Maricopa County voting decisions complied with federal laws. She said her former county election colleagues “were all very disappointed when the Voting Rights Act enforcement went away because it kind of protected them from the crazy legislature down the street.”

The question remains why county level officials limited the number of vote-centers to just 60, but Patrick suggests it might have to do with finding locations around the county that could accommodate large groups of people and would likely have occurred under the old Voting Rights Act requirements, despite suggestions to the contrary. She admitted, though, that there’s a context for concerns about discrimination.

“It’s a heightened environment, without a doubt,” she says. “Anything that doesn’t go absolutely perfectly is going to be viewed as some sort of a tactic. Now when it comes to things like legislation, that’s quite possible that there are legislative acts that are done down the street that maybe have that sort of intent, but that’s certainly not the case at the local level.”

The Arizona Republic called the entire situation an “outrage” in an editorial Wednesday, and added that the decision to switch to a vote-center model was a “cost-cutting measure” that was “badly bungled” by county election officials who “did not account for such things as high turnout or parking.”

Whoever’s to blame, the net result was the same: Thousands of people stood in line for hours, some of whom gave up and ended up not voting. Erika Andiola, the national press secretary for Latino outreach for the Sanders campaign, said she heard from her volunteers about people leaving lines and waiting hours and hours to vote.

“I’m pretty sure that other campaigns were concerned,” Andiola says. “It’s not just about Bernie Sanders, but it’s really about Arizona. How can you have such a big number of people who are trying to participate in our elections that are treated this way? We want to encourage voting, we don’t want to discourage voting. That’s definitely not something we should be doing in any state.”