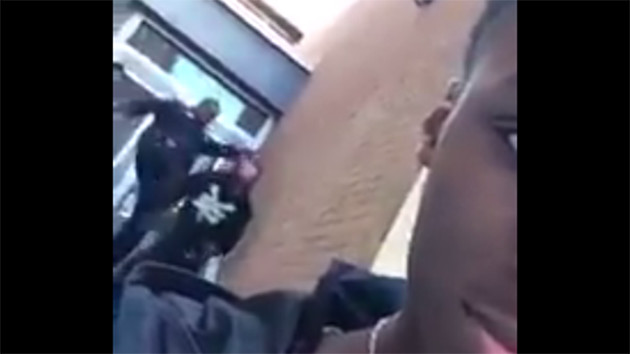 Update, Wednesday, March 9, 2016: The Baltimore City School Police officer who slapped and kicked a student in a hallway last week has been charged with assault, abuse, and misconduct, according to NBC News. Last week, a widely-circulated video of the incident prompted a public outcry and criticism from city officials. A second officer shown in the video has also been charged with assault and misconduct.

Baltimore officials have launched a criminal investigation into a recent incident involving a city school police officer who slapped and kicked a 16-year-old boy in a hallway. In a graphic and profanity-laden cellphone video, which surfaced on Tuesday and quickly spread on social media, the teen stands with his back against a wall as the officer strikes him multiple times, yelling, “get the f*** out of here.” A second officer stands by watching.

Both officers in the video, as well as Baltimore City School Police Chief Marshall Goodwin, have been placed on paid administrative leave pending the investigation, according to the Baltimore Sun. The incident has been condemned by Mayor Stephanie Rawlings-Blake and Karl Perry, the district official in charge of school safety, who said he was “appalled” by the video and that the officer’s behavior was “unacceptable.”

Documents obtained by Mother Jones give some insight into how cops working for Baltimore’s public school system are trained—and they suggest that officers are sanctioned to use violently aggressive tactics when necessary.

One lesson plan in the training documents, dated April 2015 and prepared by a Baltimore City School officer, indicates that the mission of the school police is to ensure “that students and staff have a safe environment in which to learn and teach.” The lesson stresses three core roles that each officer should embody: scholar, statesman, and warrior. One section describes the importance of understanding the law, being “driven by a moral compass,” and acting as a “servant of the people.”

Another section, however, suggests an altogether different mentality. The section quotes from “One Warrior’s Creed,” a doctrine authored by a Steven R. Watt, a retired police veteran in Utah and a colonel in the state’s Army National Guard. “You may defeat me,” it says, “but you will pay a severe price and will be lucky to escape with your life.” It reads:

Another lesson plan contained in the documents, created by a Baltimore school police training instructor, teaches the value of “verbal judo,” defined as “a set of communication principles and tactics that enable the user to generate cooperation and gain voluntary compliance in others under stressful conditions.” The Baltimore school police department uses “verbal judo,” one page explains, because officers “must attempt to GENERATE VOLUNTARY COMPLIANCE [sic] from difficult people, and we should train our officers in this most difficult and important part.” It goes on: “The cost of neglecting such training will be measured in blood, money, and public opinion. Our officers must be as competent with words as they are with firearms.”

The video is the latest in a series of disturbing and violent encounters involving school cops. As Mother Jones first reported last July, there have been at least 29 incidents across the country since 2010 in which school-based police officers used questionable force against students on K-12 campuses, including those as young as eight years old. Many of those incidents resulted in serious injuries and, in one case, death. Training and oversight of school cops has been insufficient and data on their use of force has been lacking—even as their presence has grown significantly over the past few decades.

Other lesson plans obtained by Mother Jones include trainings on firearms, report writing, cultural sensitivity, first-aid, and dealing with students with chronic absences and people with developmental disabilities. The materials suggest the Baltimore City School Police Force places insufficient emphasis on understanding adolescent and youth psychology. “This is especially problematic in a school system with youth living in poverty and dealing with trauma,” says Lisa Thurau, who heads the advocacy group Strategies for Youth and has studied in-school policing programs.

The latest investigation comes several months after another Baltimore public schools cop pleaded guilty to multiple assault charges following a similar incident that took place in October 2014. School surveillance footage shows the officer, Lakisha Pulley, hit three middle school girls with a baton, leading to serious injuries that left one of the girls with 10 stitches. The encounter prompted calls for school police reform by student advocates and parents. Last September, the NAACP’s Legal Defense and Educational Fund requested that the US Department of Justice expand its civil rights probe into the Baltimore Police Department to include the Baltimore City School Police Force. The two agencies operate independently.

David Pontious, a 17-year-old senior at Baltimore City College High School and a student activist, told the Sun this week, “Even though we’ve had a lot of meetings, a lot of input, a lot of discussions with the school system, we’ve still seen very little training that school police get, and very little accountability.”