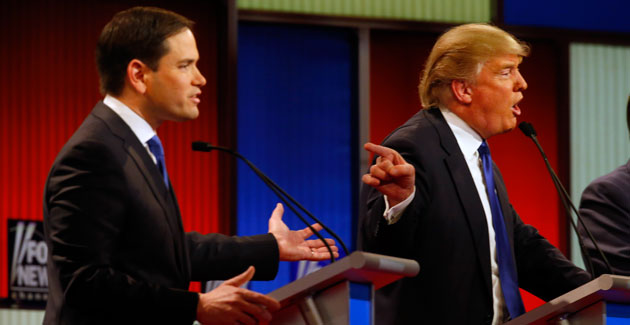 Where to even begin? It may only take a few weeks for Donald Trump to sew up the nomination, and with the stakes so high, Thursday’s GOP debate quickly devolved into insults, shouting matches, and even a reference to the size of Trump’s you-know-what.

Like last week’s debate, Marco Rubio was the most forceful in confronting the front-runner—and as a result took the most abuse from Trump. Ted Cruz also took aim at Trump, calling on him repeatedly to release his off-the-record remarks to the New York Times. Staying largely out of the fray as usual, John Kasich, despite trailing far behind in the delegate count, made the case that he still has a path to the nomination.

Here are the must-see moments from Thursday’s GOP debate in Detroit, hosted by Fox News.

Trump turns the debate into a dick-measuring contest. Just when you thought this primary couldn’t go lower, Trump literally went below the belt. It came at the beginning of the debate in response to a recent comment by Rubio about the size of his hands. “He hit my hands,” Trump said. “Nobody has ever hit my hands. I have never heard of this*. Look at those hands. Are they small hands?” Trump continued: “He referred to my hands; if they’re small, something else must be small. I guarantee you there is no problem. I guarantee.”

*Trump has been insecure about the length of his fingers for a long time.

Kasich: “We’re headed up north…to my turf.” The moderators turned to Kasich, who is furthest behind in the delegate count (except for Ben Carson, who is expected to drop out of the race), to grill him on whether he had any chance of securing the nomination. “On Super Tuesday you finished in single digits in 9 out of 11 states,” said moderator Bret Baier. “So, you can see that your path is through a contested convention?”

Kasich responded forcefully: “I split delegates in Vermont with Donald Trump, I finished second in Massachusetts, and we won delegates in Virginia,” he said. “But, guess what? It’s now March Madness and we’re heading up North to the place—to my turf, okay?”

Trump can’t stop calling Rubio “little.” Just moments after the debate opened with a question to Trump about his penchant for insulting his rivals, the real estate mogul began repeatedly referring to Rubio as “little.”

TRUMP: This little guy has lied so much…

TRUMP: …about my record.

HOST CHRIS WALLACE: I have a policy question for you, sir.

RUBIO: Let’s see if he answers it.

Trump defends his flip-flops. The Fox News moderators confronted Trump with three video clips showing him switching positions—in once case, doing a 180 on Syrian refugees within a day’s time. Trump struggled to defend his various flip-flops.

“I have a very strong core,” Trump eventually said. “But I’ve never seen a successful person who wasn’t flexible…You can’t—for instance, let’s say on, on the second question—you can’t say it’s okay, and then you find out it’s not okay, and you don’t want to do anything. You have to be flexible, because you learn.”

Megyn Kelly grills Trump over Trump University. At one point, Rubio and Trump got into a shouting match over Trump University, the now-defunct real estate seminar that Trump is being sued over by some former students. Trump claimed the Better Business Bureau gave his “university” an A rating. Rubio, who has lately been unleashing the fruits of his campaign’s copious opposition research on his rival, countered, that it was a D-. Finally, host Megyn Kelly stepped in. “With respect, we went back and looked at this,” she interjected. “The rating from the Better Business Bureau was a D-.

Kelly, who was a lawyer before her career at Fox News, went on to lay out the case against Trump University and challenge many of Trump’s assertions about the lawsuits.

Trump is a “con artist,” but Rubio, Cruz, and Kasich pledge to support him if he’s the nominee. As the debate wrapped up, the moderators posed a final question to Cruz, Kasich, and Rubio: Would they support Trump if he became the GOP’s presidential nominee? After spending two hours calling Trump a con artist and fraud who holds liberal beliefs and doesn’t have the foreign policy chops to be president, Cruz and Rubio vowed to support him if he wins the nomination. So did Kasich (who has largely steered clear of the trash-talking). The moderators then asked Trump if he would support the GOP nominee, should it not be him. He agreed.

Also, what is on Cruz’s lips? And did he just eat it?