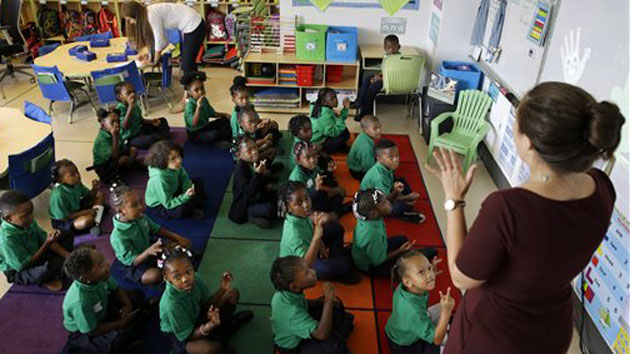 Kindergarten teacher and students at KIPP Thrive Academy, a new school in what had been the closed Eighteenth Avenue School in Newark, New Jersey.AP Photo/Mel Evans

Last September, Gene Demby, a writer with NPR’s Code Switch team, penned an essay mourning the loss of public schools in his native Philadelphia. The elementary and middle schools he’d attended as a kid had closed in recent years and were eventually replaced by charters.

“Our schools are signposts in the stories we tell ourselves about ourselves and our communities,” Demby said.

As more public schools shutter—Philadelphia has shut down more than 30 of them since 2012, while hard-hit cities such as Detroit have closed 204 since 2002—that story increasingly revolves charter schools. And a new study raises intriguing questions about how these schools discipline students and how such rules disproportionately affect black children and students with disabilities.

And while charter schools encompass a broad range of teaching styles—some follow the Montessori model or have an ethnocentric focus, for example—many in urban areas follow a “no excuses” philosophy.

This approach borrows heavily from a “zero tolerance” policing ideology that emphasizes cracking down on minor offenses, including by searching the pockets of teenagers living in low-income neighborhoods for drugs and weapons, to prevent major crimes such as drug dealing down the road.

In a classroom setting, this translates into a belief that the smallest infractions, such as passing a note during class, is to be met with an immediate consequence. Depending on the offense, that can escalate from being asked to stand up for the rest of the class to being sent home on an “out-of-school suspension.” Schools such as the Knowledge is Power Program (KIPP), Success Academy, and Uncommon Schools, among others, use various parts of “no excuses” ideology.

“If you don’t tuck in your shirt, if you space out for a minute and don’t track your teacher with your eyes, if your binder is messy, you lose points,” one former KIPP student told me in 2014 of his middle school experience.

“If you lose enough points, you are not allowed to go on field trips or be a part of graduation ceremony. My homeroom teacher was really young and didn’t know how to control the classroom. She kicked me out a lot and I was sent home a lot. Some of us called it the Kids in the Public Prison Program,” he said.

A famous example of “no excuses” charter school is the Roxbury Preparatory Charter School near Boston that was founded by Secretary of Education John King Jr. in 1999. Roxbury Prep became the highest-performing urban public school in Massachusetts, according to NPR. It is these high test scores—more than any other measure—that charter school advocates cite as a strong argument for replacing traditional schools.

But as more “no excuses” charter schools open, a growing number of critics have been raising serious concerns: Do charters truly admit all students—such as kids who face great challenges like severe disabilities or recent immigrants who don’t speak English—like traditional schools do? And do some charters engage in practices that artificially raise kids’ test scores?

Yesterday, the UCLA’s Center for Civil Rights Remedies published a study that for the first time looked at discipline data for 5,250 charter schools and 95,000 public schools. The study, “Charter Schools, Civil Rights and School Discipline: A Comprehensive Review,” focused on how often students were sent home on detention (or “out-of-school suspensions,” in education jargon) during the 2011-12 academic year.

Researchers have found that being suspended is a strong indicator that a student will eventually drop out. And students who drop out are much more likely to end up in prison, becoming part of the “school to prison pipeline.” This issue disproportionately affects black students (in charter and noncharter schools), who are suspended at a rate three times greater than white students.

Here are the most significant findings in the report:

Suspensions are falling, but there is a disturbing trend. The good news is that early data suggests suspension rates have been declining in many districts since 2012, thanks in part to a recent push by the federal government and various advocates to encourage schools to consider alternative discipline approaches grounded in strong research.

That said, there were troubling exceptions in two states, the authors write. Last year, charters in Connecticut suspended and expelled higher percentages of students in preschools and elementary schools (14 percent) than the public schools did (3 percent). And in Massachusetts, data from 2015 showed that charter schools made up a disproportionate share of the state’s highest-suspending schools. Secretary of Education John King’s Roxbury Prep had the highest suspension rate of all charter schools in the state: 40 percent of all students and 58 percent of its students with disabilities were suspended in 2014. (Nationally in all schools, that number was 10 percent and 18 percent, respectively, in the 2011-12 academic year.)

What the authors of the report found especially worrisome was that close to half of all black students at middle and high school charter schools went to one of the 270 schools that was highly segregated (80 percent black) and where the suspension rate for black students was extremely high: 25 percent. Even more disconcerting, 235 charter schools suspended more than 50 percent of their enrolled students with disabilities, the researchers wrote.

The patterns among some charter schools of having high test scores and very high suspension rates prompted the authors of the report to conclude, “Although beyond the scope of this report, the possibility certainly exists that some charter schools are artificially boosting their test scores or graduation rates by using harsh discipline to discourage lower-achieving youth from continuing to attend.”

Charter schools may benefit from another advantage that potentially boosts test scores: so-called “selection bias.” Many scholars have pointed out, the report says, that since charter schools require parents to apply for a charter or enter lotteries, the schools typically attract more students who have engaged parents, or who are higher achieving or better behaved. A 2015 study by the University of California-Berkeley showed that in fact students who entered charter schools in Los Angeles were already higher achieving, as measured by their standardized test scores, than their peers in traditional schools.

Charter schools teach fewer students with disabilities and fewer kids who are learning to speak English. While the report found that charter schools enroll higher percentages of black students and poor students than traditional schools, the researchers also found that charters tend to have smaller percentages of students with learning disabilities (ranging from attention deficit hyperactivity disorder and autism to kids in wheelchairs) and kids just learning to speak English. Yet students who live in poverty are more likely to be diagnosed with learning disabilities and to be learning English, so researchers were surprised to find that these two groups were underrepresented at charters. This data raised additional concerns with the study authors about enrollment and suspension policies in charter schools.

Many charter schools don’t suspend a lot of students, and some “no excuses” followers are reforming their discipline tactics. The report found that among middle schools and high schools, only 332 schools were classified as “high-suspending” (meaning these schools suspended more than 25 percent of any group). With elementary grades, the 240 high-suspending charter schools were far outnumbered by the 486 lower-suspending schools (those with a suspension rate around 10 percent or less).

And while some charter schools such as the widely known Success Academy have publicly defended their suspension policies, others like KIPP are embracing reform. Just last month, many KIPP school leaders at a national meeting attended sessions on the “restorative justice” approach to school discipline—which uses misbehavior and conflict as opportunities for self-reflection and learning with the help of a trained coach—as an alternative to “zero tolerance” discipline. And California and Connecticut have recently prohibited the use of suspensions for minor infractions for young students in all schools in those states.

The new federal Every Student Succeeds Act now requires that states include many measures in their school grading formulas—not just standardized test scores—including “school climate” indicators such as suspensions.

“Currently, half of all states do not report discipline data broken up by race and disability to the public on their state site, even though every state is required to do so every year,” Daniel J. Losen, one of the authors of the report and the director of the Center for Civil Rights Remedies, told Mother Jones.

As Demby reflected in his essay on the past and future of public education, “It’s no accident that local schools are battlegrounds for so many of our most heated, pitched battles over race and place in America.” There are big questions embedded in how we decide to educate kids and how we allocate public resources to schools, he added. “Who gets to go to the best of them?” he asked.